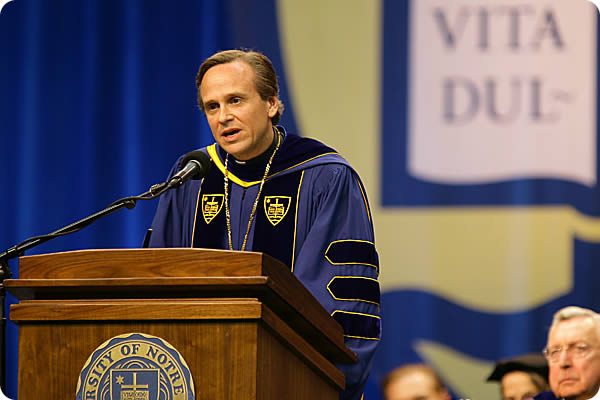 On the heels of the story that hit the news stands at 11AM, the President of the University of Notre Dame, explains clearly what the lawsuit is about, and just as importantly, what it isn’t about. This hit my inbox from the Washington Examiner,

Today the University of Notre Dame filed a lawsuit in U.S. District Court for the Northern District of Indiana regarding a recent mandate from the U.S. Department of Health and Human Services (HHS). That mandate requires Notre Dame and similar religious organizations to provide in their insurance plans abortion-inducing drugs, contraceptives and sterilization procedures, which are contrary to Catholic teaching. The decision to file this lawsuit came after much deliberation, discussion and efforts to find a solution acceptable to the various parties.

Let me say very clearly what this lawsuit is not about: it is not about preventing women from having access to contraception, nor even about preventing the Government from providing such services. Many of our faculty, staff and students — both Catholic and non-Catholic — have made conscientious decisions to use contraceptives. As we assert the right to follow our conscience, we respect their right to follow theirs. And we believe that, if the Government wishes to provide such services, means are available that do not compel religious organizations to serve as its agents. We do not seek to impose our religious beliefs on others; we simply ask that the Government not impose its values on the University when those values conflict with our religious teachings. We have engaged in conversations to find a resolution that respects the consciences of all and we will continue to do so.

The details of the process that led to the mandate are publicly known. In an Interim Final Ruling issued August 3, 2011, the federal government required employers to provide the objectionable services. A narrow exemption was given to religious institutions that serve and employ primarily members of their own faith, but, departing from a long tradition in federal law, organizations like Notre Dame—schools, universities, hospitals and charitable organizations that serve and employ people of all faiths and none—were granted no exemption, but instead were made subject to the law to the same extent as any secular organization. On September 28, I submitted a formal comment encouraging the Administration to follow precedent and adopt a broader exemption.

Despite some positive indications, the Administration announced on January 20, 2012, that its interim rule would be adopted as final without change. After an outcry from across the political spectrum, President Obama announced on February 10 that his Administration would attempt to accommodate the concerns of religious organizations. We were encouraged by this announcement and have engaged in conversations with Administration officials to find an acceptable resolution. Although I do not question the good intentions and sincerity of all involved in these discussions, progress has not been encouraging and an announcement seeking comments on how to structure any accommodation (HHS Advanced Notification of Proposed Rule Making on preventative services policy, March 16, 2012) provides little in the way of a specific, substantive proposal or a definite timeline for resolution. Moreover, the process laid out in this announcement will last months, making it impossible for us to plan for and implement any changes to our health plans by the government-mandated deadlines. We will continue in earnest our discussions with Administration officials in an effort to find a resolution, but, after much deliberation, we have concluded that we have no option but to appeal to the courts regarding the fundamental issue of religious freedom.

It is for these reasons that we have filed this lawsuit neither lightly nor gladly, but with sober determination.

Read the rest. Next, a video put out by the Archdiocese of Washington. This from the liner notes,

Chancellor Jane Belford of the Archdiocese of Washington explains the significance of the lawsuit filed to protect freedom to practice religion. Chancellor Belford details why the suit is necessary in light of the attempt of the government to redefine what is a religious institution. She explains that under the new definition that the work of Mother Teresa no longer would qualify as the work of a religious institution.

Father Z has a list of the plaintiffs in all twelve lawsuits filed today.

May 21, 2012
Catholics to the Courtrooms: OSV, University of Notre Dame, and 43 Dioceses Ramp Up the Legal Fight Against the HHS Mandate
Next Post

May 21, 2012 The Dozen Lawsuits Filed Today Garnered all of 15 Seconds on CBS News. We Shall Overcome.
Recent Comments
0 | Leave a Comment
"Vaya con Dios, Leonard; Rest in Peace."
AnonCollie Leonard Nimoy Explains The Origin Of ..."
"Thank you for sharing"
Andy To Break My Fast from Being ..."
"I've seen Matt Maher live four times...twice since this song was released. I absolutely love ..."
Veritas81 WYD Flashback With Matt Maher, And ..."
"Yes, and Dolan should have corrected the scandalous and wrong decison of his predecessor when ..."
sixbunnies Archdiocese of New York Health Plan ..."
Browse Our Archives
Related posts from Why I Am Catholic