Thoughts on the Role of the Laity on this Feast of St. Joan of Arc UPDATED 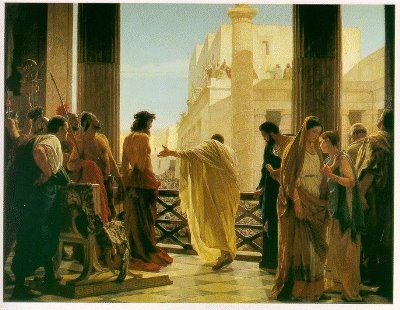 And so we leave Eastertide behind.  Before we move on into “Ordinary Time”, recall the events of Holy Week with me. During that week, way back in the year 33 AD, the forces of human justice, lobbied aggressively by the interested parties of the Pharisees and Sadducees, convinced the Roman procurator, Pontius Pilate, to sentence Jesus to death on a cross. And though the whole mess was a tragic setup, it was all done officially and legally.

I can think of many things today that are both official and legal and still very tragic. Here’s an example. A friend of mine who is serving in the Army in Afghanistan sent me this message recently:

Just finished a ceremony for 6 soldiers we lost to a suicide bomber this weekend. Say a prayer for their family and friends when you lay down tonight.

And I will pray for their souls too. But I can’t do much more than that. In fact, in order to avoid being sucked into the vortex of despair, I try to pay attention to that which I can have an impact on more than on that which I cannot. I have to filter out much of what goes on in the world to do that. And paradoxically, that is one of the reasons why I am a Catholic today. Not that I shun the world, or anything. ‘Tis a paradox, I know. One that this post cannot explain in any meaningful way.

Or maybe it can. In the past I’ve written about the saints known as the Desert Fathers and Mothers. They were hermits, and yet they got together with their brethren for Mass. Now I’m not sure how often they did this (once a week? once a month? whenever they ran low on water?) but I’m pretty sure it wasn’t daily. Then, after celebrating the Eucharist, they headed back to their respective cells or wherever it was that they holed up. Back to making baskets, or mats, and back to praying and studying the scriptures. And back to their own battles against the wiles of the devil.

In other words, they went about their business in a solitary fashion in the way that each one of us must do as well. Perhaps the word “must” is too strong, but I don’t really  see any other way. Because hanging with the popular crowd, or the world-at-large, isn’t going to provide you with the opportunities to “work out your salvation with fear and trembling.” Being carried along with the world, see, you’ll forget that the reason Christ allowed Himself to be crucified was so that you could inherit eternal life. God became a man and died so that we could be redeemed.

But none of that makes sense to the world, because it admires strength, fears death, and abhors weakness. As the Holy Spirit reminds us through the words of St. Paul,

The message of the cross is foolishness to those who are perishing, but to us who are being saved it is the power of God. For it is written: “I will destroy the wisdom of the wise, and the learning of the learned I will set aside.” (1 Corinthians 1:18-19)

I recently saw something that St. Thérèse of Lisieux said that illustrates the love God has for us and why the world doesn’t understand it,

Let us suppose that the son of a very clever doctor, stumbling over a stone on the road, falls and breaks his leg. His father hastens to his aid, and binds up the fractured limb with all the skill at his command. When cured, the son shows the utmost gratitude…and with good reason.

This must have been how the Apostles felt after Our Lord’s Resurrection. She continues the story,

But, on the other hand, suppose that the father, knowing that a large stone lies on his son’s path, anticipates the danger, and, unseen by anyone, hastens to remove it. Unconscious of the accident from which such tender forethought has saved him, the son will not show any mark of gratitude for it, or feel the same love for his father as he would have done had he been cured of some grievous wound.

And neither will you or the world. But the Little Flower goes on to say,

But if he came to learn the whole truth, would he not love his father all the more?

And that “whole truth,” the Good News, is what the apostles gave their lives up for, dying deaths as martyrs while sharing Christ’s message with the whole world. But that message didn’t go with them to their graves because the Church Christ started, and the one he vouchsafed to them, continues on to carry out the work of salvation until the end of time. Thanks be to God.

But the work does not belong only to the apostles, nor to their successors, the bishops. As the editors of the National Catholic Register remind us today, which happens also to be the Feast of St. Joan of Arc, patroness of this blog, it’s time for the laity to do our part as well.  From their editorial entitled The Hour of the Laity, we learn that,

The Church in America now faces a challenge that demands the laity exercise their role as Vatican II saw it. What began as an apparently well-intentioned effort to serve justice by helping everyone have “affordable access to health care” (a concern of the Catholic bishops for the longest time, by the way) is turning out to be a grave encroachment on the religious liberty of millions of Americans.

In carrying out their ordinary duties of everyday life — striving to live according to the Gospel while raising families and making a living, contributing to the common good by doing their jobs well — Christians are being asked to carry an extra burden.

It is the burden of knowing that part of what they have earned will be set aside, through the premiums they pay for their health insurance, to pay for products and procedures that they know are morally illicit. Companies and organizations — even those with official ties to the Church or those that are animated by Catholic principles — will be asked to facilitate this transfer of funds, or to stand by quietly as others do it for them, a reality that forces them to cooperate with the sinful practices to which they object.

The Church per se will not be made to participate, it is true, but that is only because the Church falls within a very narrow definition of religion that has been devised by the state: To be considered an exempt religious organization, its primary animus must be conversion of others to its faith; it must employ and serve primarily members of that faith. That itself is part of the reason for the present controversy — that the state may dictate what constitutes religion.

The bishops have taken the lead in the current battle — speaking out and inspiring the faithful — and that’s great. We are blessed to have men like New York’s Cardinal Timothy Dolan, Baltimore’s Archbishop William Lori and many others who are putting their talents at the service of the true and the just — and what is in the best interest of the laity’s ultimate goal of salvation.

They are doing their job — protecting the flock they are called on to shepherd. But some supporters of the Obama administration’s efforts to broadly provide contraception, sterilization and abortion-causing drugs are happy to allow the “bishops’ war on women” narrative to stand.

Anyone who looks a little deeper will see that this is an unjust caricature. Fifty years after the opening of the Council that so clearly defined the role of the laity in the Church and the modern world, “The Hour of the Laity” has surely come. The laity must stand up and let it be known that it is their fight, and it is their religious liberty they are defending. They must not let the bishops stand alone.

Read the rest to learn ways to answer our call.

St. Joan of Arc haunts the modern mind in music.

Remembering St. Joan on her birthday. 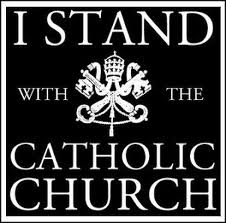 May 28, 2012
For A Few Thoughts On Memorial Day UPDATED
Next Post

May 31, 2012 When Galaxies Collide! Perhaps We Should Start Panicking Now?
Recent Comments
0 | Leave a Comment
"Vaya con Dios, Leonard; Rest in Peace."
AnonCollie Leonard Nimoy Explains The Origin Of ..."
"Thank you for sharing"
Andy To Break My Fast from Being ..."
"I've seen Matt Maher live four times...twice since this song was released. I absolutely love ..."
Veritas81 WYD Flashback With Matt Maher, And ..."
"Yes, and Dolan should have corrected the scandalous and wrong decison of his predecessor when ..."
sixbunnies Archdiocese of New York Health Plan ..."
Browse Our Archives
Related posts from Why I Am Catholic