Why I Won’t Be Seeing “For Greater Glory” UPDATED

Why I Won’t Be Seeing “For Greater Glory” UPDATED June 1, 2012 Frank Weathers 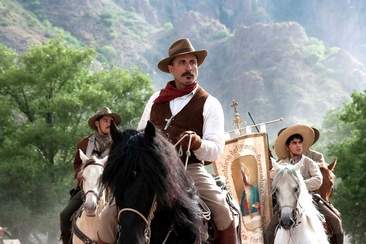 Pick up stones and hurl them at me if you want to, but I won’t be dragging the family to the theaters this weekend to watch For Greater Glory. Nope, not even at matinee prices. I’ll just wait for it to show up on Netflix, if I bother to watch it at all.

Yeah, yeah, I know what it’s about. I know it’s about fighting for religious liberty, in Mexico, the Cristero War, etc., etc., with bullets and bloodshed and all that ruckus. But here’s the thing. The movie, according to my go-to source that has never let me down (except once*) is screaming “avoid.” And sort of like a pilot flying through the soup, see, I tend to trust my instruments. Especially when tickets to the movies for a family costs as much as filling up the gas tank, if not more.

In the past, I’ve written about time being too precious to waste on a bad movie, and I’ll be sticking with that assertion. If you want to be like the die-hard Ayn Rand lovers who claimed that the best, most important movie of all time was last years release of Atlas Shrugged, Part 1, by all means be my guest. But for those of you who don’t have limitless entertainment budgets (show of hands), Metacritic recommends you avoid For Greater Glory. In case you’re unfamiliar with their ranking system, here’s a refresher.

Joe Six-Pack, USMC is the master of the obvious (if anything at all). Guess what else? He’s cheap too. Or frugal, depending on your frame of reference. The bottom-line? I filter my possible movie viewing choices through a trusted source before deciding to commit my limited amount of entertainment dollars to seeing a movie.

My tool of choice for vetting films is a website called Metacritic. And unlike some of my friends recommendations, Metacritic has never let me down. Here’s how they scored The Love Guru. Um, yes, I passed on that one.

It began as a simple idea back in the summer of 1999: a single score could summarize the many entertainment reviews available for a movie or a video game. Metacritic’s three founding members—all former attorneys who were happy to find a more constructive but less profitable use of their time—launched the site in January 2001 and Metacritic has evolved over the last decade to reflect their experience distilling many critics’ voices into the single Metascore, a weighted average of the most respected critics writing reviews online and in print.

Metacritic’s mission is to help consumers make an informed decision about how to spend their time and money on entertainment. We believe that multiple opinions are better than one, user voices can be as important as critics, and opinions must be scored to be easy to use.

It’s as easy as Green, Yellow and Red. Just as simple as your experience decoding a traffic signal. And now, they even score TV shows (I’ve no time for those) and music (they make new music?) as well. They also have a feature where folks can post their own reviews, but the official Metascore is based on the reviews of professional critics.

When I shared that information the first time ’round, Metacritic scored the Ayn Rand epic (flop) a whopping 28 out of 100, solidly in the red light department. Guess how the Andy Garcia/Eva Longoria film scored? 35 out of 100, landing in the heart of the red light district. And did I mention that the film is rated R? Another huge strike against it in the family viewing department.

A little while ago, I saw a post with the following headline: Roger Ebert Pans “For Greater Glory” For Being Too Catholic. Unfortunately, that is not quite the case. As the good folks over at Metacritic clearly show, Mr. Ebert (who is a lapsed Catholic, for those of you who are interested) actually gave the film the best review that it has received thus far by any major film critic. His review was scored as 63/100. Barely in the green, true, but a positive review nonetheless. Here’s a review from Movie Line with a headline that pretty much says it all: Despite Cristero War Setting, “For Greater Glory” Could Use a Better Story.

If you really want to ignore everything I’ve shared with you here, and go see the movie anyway, that’s the beautiful thing about America. You are free to spend your money as you see fit. But don’t come crying to me when you are disappointed by it. Deal? Besides, Stephen D. Greydanus liked it, so I might watch it on Netflix one day after all. Before heading out though, you may want to check the scores on all the other movies playing in theaters now. Just to be on the safe side.

Have a great weekend!

UPDATE: Read a firsthand account of persecution from before the Cristeros War over on the YIMCatholic Bookshelf here, and here. More titles available on Amazon.

UPDATE II: How did Metacritic rate other movies you may have loved? Metacritic gave glowing, nay, awesome, reviews on these three great films: Cinderella Man? A deeply green 69. Into Great Silence? A green homerun and a 78. And remember  Of Gods and Men? A grand slam at 86, which equals “universal acclaim.”

UPDATE III: Have you read Graham Green’s The Power and the Glory? Here’s a solid post about the Cristero War from Le Fleur de Lys.

UPDATE IV: Fr. Michael Gossett has a review and a plea for good Catholic movies…

*It led me to waste 3+ hours (that I’ll never get back) on watching the alleged masterpiece (scored 85/100 = “Universal Acclaim”) by Terrence Malick, The Tree of Life, so it’s not foolproof. zzzZZZzzz Thankfully, the art house theater in my town sells beer now. Unfortunately, when The Tree of Life was playing, they didn’t have their license yet.

May 31, 2012
When Galaxies Collide! Perhaps We Should Start Panicking Now?
Next Post

June 4, 2012 Brad Miner Saw "For Greater Glory" This Weekend, and A Book Recommendation Too UPDATED
Browse Our Archives
get the latest from
Catholic
Sign up for our newsletter
POPULAR AT PATHEOS Catholic
1

On the Patriot Front's Appearance at...
Steel Magnificat
Related posts from Why I Am Catholic