Brad Miner Saw “For Greater Glory” This Weekend, and A Book Recommendation Too UPDATED 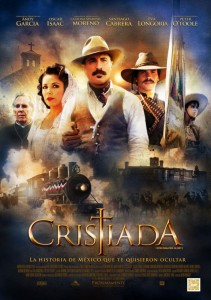 His review confirms my decision (it’s just one man’s opinion, take it or leave it) to not go see the film at theater prices, even though I honor the sacrifices of those who fought, died, or were martyrd during the dark days of La Cristiada. Here’s the meat and potatoes of his review,

Garcia portrays Gorostieta with measured, conscious restraint. This is a man who knows himself, knows his job, and knows how to lead. He is every inch a general. And so when in several scenes emotion washes over him, the effect is powerful – especially so in scenes involving the capture and later martyrdom of Blessed José Luis Sanchez (well acted by 14-year-old Mauricio Kuri). But good as Mr. Garcia is, the show is nearly stolen by Oscar Isaac, whose moustache doesn’t seem real but whose portrayal of Victoriano “El Catorce” Ramirez is a genuinely remarkable union of faith and fury, mostly fury.

Overall though, I must say this is by no means a great film. Mr. Wright’s approach – the direction, the script, and the editing – is choppy; there’s no other word for it. And there are scenes that simply make no sense. And there are rather a lot of people looking alarmed and saying: “Run!” or “Go now!” Indeed, much of the film teeters on the edge of telenovela melodrama. James Horner’s music will swell as the camera pans up or down to reveal – what wonder? – an ordinary landscape, it turns out, or a special effects shot that just isn’t special. There’s much discussion among generals about how many thousands of troops will deploy in the war or how many hundreds have died in a battle, but Mr. Wright never shows us more than a skirmish. There’s no . . . epic sweep. And Eva Longoria (as the wife of Gorostieta) is wasted.

And the film fails to mention – although viewers may infer it – that in one of those unsettling ironies of history, once the Church had negotiated an agreement to begin restoration of the rights of clergy, the Vatican turned on the Cristeros and threatened excommunication to those who continued fighting for the full restoration of their human rights.

Still, as Archbishop Charles Chaput has wisely said, this is “a film that no Catholic should miss this summer. . . . For Greater Glory captures with memorable power and grace where . . . bigotry can lead – and the cost of resisting it.”

You can read the full review over at The Catholic Thing. Be gentle with him, dear readers.

Monsignor Charles Pope also ran a post this weekend that caught my attention as well, and underlines another reason why I am in no hurry to go see the film. It’s called Cool Guys Don’t Look At Explosions: A Parody on the Culture of Death.  The title refers to a  YouTube video that jibes at the said culture. But given Miner’s mention of explosions and such in his review (yes, Joe Six-Pack, USMC knows what explosions are, and what they do), I agree with the Monsignor when he points to the following,

This whole mindset has even reached our entertainment industry which portrays the culture of death in an almost cartoonish way. Notice the basic scenario of most every action or adventure movie:

As the movie begins a villainous individual or group commits some heinous act of injustice. But soon enough “our hero” steps on the scene and commits to resolve this terrible threat and correct the injustice. After about 90 minutes of killing people, breaking things, blowing up buildings and engaging in hair-raising car chases that usually end in fiery crashes our hero triumphs overwhelmingly, restores justice and walks off the set with “the girl” on his arm, burning buildings in the background….fade to credits.

And we love this sort of stuff. At one level it is very entertaining. But it IS a cartoon. In real life villains and heroes are not as easily distinguished (though I do NOT mean to say that there is no such thing as right and wrong). Likewise, in real life blowing up buildings, car chases etc. endanger lives and take serious tolls. Real people do not walk away from high speed car crashes like they do in the movies. If they survive at all it takes months to recuperate from the damage inflicted on a real human body. In real life people who get killed, even if they are villains have people who mourn their loss. The true toll of all this violence is far greater in real life.

Ultimately it is the culture of death on display in cartoonish fashion. It is a parody of real attitudes in western culture. But the message is clear enough, cartoonish though it be: the solution to injustice is violence, mayhem and death. I do not deny that sometimes lethal force must be used to protect society from evil but it is always a last recourse and a moment for deep concern and moral reflection.

“Oh come on Father lighten up!….” OK I admit it is usually “good fun” and most don’t take it seriously. But my central point is that we should be careful as to the messages we send and receive even in diversionary entertainment. It says something about us that we are entertained by this sort of stuff. We ought at least to do a reality check as to this. Every now and then we do well to examine our culture and its premises. Is this movie teaching what Christ did? Just a thought.

Read the rest, and see the parody video, over at his blog.

Though I disagree with Archbishop Chaput’s “must see” film recommendation (which is well within the bounds of prudential judgement for me to do so), I agree with him 100% about reading Graham Greene’s  novel, The Power and the Glory.

If you have never read it, get thee to a library, a bookstore, or Amazon, ASAP as it is a must read for the Summer. I picked it up at the library on Saturday and I have not be able to put it down. It is simply fantastic. In my mind’s eye, I couldn’t help but cast Michael Emmerson of Lost, and A Person of Interest fame, as the “whisky priest.” And Andy Garcia, plumbing his darker side, would be a natural in the role of “the Lieutenant,” the militant atheist servant of the state, bent on tracking down the fugitive priest, and ridding the world of the Church.

Here’s a taste why this novel is a treasure from Roger over at Cor Jesu Sacratissimum,

What words, what phrases of mine can possibly begin to do justice to this masterpiece: Graham Greene’s The Power and the Glory?

For this is true literature, in which one finds the most acute observation of the human condition, in all its frailty and fallen-ness.

Fallen-ness: it is a word one may draw from Christianity and Catholicism, and this is a book that is very, very Catholic.

If you enjoyed For Greater Glory, then you will simply love this novel. I guarantee it.

Incidently, I closed the comments on the previous post. But that didn’t stop some well meaning Catholic from sending me an e-mail. What is the quickest way to get your e-mail sent directly to my Spam Box, without passing “Go?” Send it with a subject line like this…

For greater glory. Are You Satanic???

Um, were you confirmed with the Holy Spirit, too? Yeah? Then let’s go win some converts together! I’ll be the Good Catholic, and you can be the Bad Catholic.

Seriously folks, agree, disagree, whatever. But soul reading and spear throwing via rash judgement, by way of the internet, are the tools of the Devil. Chill out.

UPDATE: Fr. Michael Gossett with a review and a plea for good Catholic movies.

June 6, 2012 Because Catholics Say Stuff Like This...And Mean It
Recent Comments
0 | Leave a Comment
"Vaya con Dios, Leonard; Rest in Peace."
AnonCollie Leonard Nimoy Explains The Origin Of ..."
"Thank you for sharing"
Andy To Break My Fast from Being ..."
"I've seen Matt Maher live four times...twice since this song was released. I absolutely love ..."
Veritas81 WYD Flashback With Matt Maher, And ..."
"Yes, and Dolan should have corrected the scandalous and wrong decison of his predecessor when ..."
sixbunnies Archdiocese of New York Health Plan ..."
Browse Our Archives
Follow Us!

What's the Biggest Difference Between Catholics...
The Cordial Catholic
Related posts from Why I Am Catholic