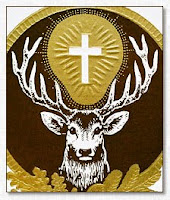 Confessor, thirty-first Bishop of Maastricht, first Bishop of Liège, and Apostle of the Ardennes, born about 656; died at Fura (the modern Tervueren), Brabant, 30 May, 727 or 728.

Yawn, right? Yep, just another run-of-the-mill perfect saint story. Where do they come up with these guys, central casting? What happened to all the regular guy saints, like St. Peter and the rest of the crew?

Maastrict—that’s in the Netherlands. Isn’t that the hometown of some important treaty? Yeah, that’s right. In 1992 when the European Union was formed. But that is way after Hubert’s time, and nowhere near as interesting as his story.

He was honored in the Middle Ages as the patron of huntsmen, and the healer of hydrophobia (rabies).

Whaat?! OK, I’m interested. Heck, I’m a Southern boy and I love to hunt. A man has got to eat! Besides, I can’t let all that “world’s finest” marksmanship training I was given in the Marine Corps go to waste. Tell me more!

He was the eldest son of Bertrand, Duke of Aquitaine, and grandson of Charibert, King of Toulouse, a descendant of the great Pharamond. Bertrand’s wife is variously given as Hugbern, and as Afre, sister of Saint Oda.

So he’s a rich kid, and his dad is a Duke for crying out loud. Must be nice. I heard once that rich kids have two choices regarding what they become when they grow up: a wastral or a saint. He didn’t choose the former or I wouldn’t be doing this post. It doesn’t hurt that his dad married the sister of a saint either. But that doesn’t mean anything either, really. Sainthood doesn’t pass through the genes. What else is there?

As a youth, Hubert went to the court of Neustria, where his charming manners and agreeable address won universal esteem, gave him a prominent position among the gay courtiers, and led to his investment with the dignity of “count of the palace”. He was a worldling and a lover of pleasure, his chief passion being for the chase, to which pursuit he devoted nearly all his time.

A “worlding” interested in the chase, huh? Chasing game or chasing skirts? Either way, he sounds like a normal, single, unattached guy, doesn’t he? Except that unlike us, he’s a rich playboy, with no worries, no cares,  and no commitments. That and he is the most popular dude in town. Hubert’s living the dream.

The tyrannical conduct of Ebroin caused a general emigration of the nobles and others to the court of Austrasia. Hubert soon followed them and was warmly welcomed by Pepin Heristal, mayor of the palace, who appointed him almost immediately grand-master of the household.

Yeah, just like a rich guy to bug out at the first sign of trouble, right? “Have money, will travel” seems to be the story here. I’m starting to wonder about this guy.

About this time (682) he married Floribanne, daughter of Dagobert, Count of Louvain, and seemed to have given himself entirely up to the pomp and vanities of this world. But a great spiritual revolution was imminent.

And none too soon, because I was just getting ready to say farewell to this bon vivant punk heading down the primrose path. What, pray tell, happened next?

On Good Friday morn, when the faithful were crowding the churches, Hubert sallied forth to the chase. As he was pursuing a magnificent stag, the animal turned and, as the pious legend narrates, he was astounded at perceiving a crucifix between its antlers, while he heard a voice saying: “Hubert, unless thou turnest to the Lord, and leadest an holy life, thou shalt quickly go down into hell”.

Whoa! Say whaat?! See what happens when you skip mass?

Hubert dismounted, prostrated himself and said, “Lord, what wouldst Thou have me do?” He received the answer, “Go and seek Lambert, and he will instruct you.”

OK, who in their right mind would make up a story like this? Especially from a rich and very popular playboy?!. What could Hubert possibly have to gain from this? He was, after all, very much like a version of the character “Gaston” from Disney’s Beauty and the Beast, just about 7 centuries earlier is all. He probably used antlers in all of his decorating too.

How about a Gaston interlude!

Nah, just keep this little incident to yourself Hubert. It never happened, all is well, just keep partying, and hunting, and collecting all your rents and royalites, etc.

Accordingly, he set out immediately for Maastricht, of which place St. Lambert was then bishop.

Sheesh! This guy is serious!

The latter received Hubert kindly, and became his spiritual director. Hubert, losing his wife shortly after this, renounced all his honors and his military rank, and gave up his birthright to the Duchy of Aquitaine to his younger brother Eudon, whom he made guardian of his infant son, Floribert. Having distributed all his personal wealth among the poor, he entered upon his studies for the priesthood, was soon ordained, and shortly afterwards became one of St. Lambert’s chief associates in the administration of his diocese.

Truth is stranger than fiction, and in this case Truth left an indelible impression on our happy-go-lucky, playboy of a hunter. After his wife died, he makes a decision that reminds me of someone else I know and love. What else is there to know about this guy?

By the advice of St. Lambert, Hubert made a pilgrimage to Rome and during his absence, the saint was assassinated by the followers of Pepin. At the same hour, this was revealed to the pope in a vision, together with an injunction to appoint Hubert bishop, as being a worthy successor to the see.

Murder, intrigue, and visions culminating in papal appointments to bishoprics for our man Hubert. And then what did he do?

Hubert was so much possessed with the idea of himself winning the martyr’s crown that he sought it on many occasions, but unsuccessfully. He distributed his episcopal revenues among the poor, was diligent in fasting and prayer, and became famous for his eloquence in the pulpit. In 720, in obedience to a vision, Hubert translated St. Lambert’s remains from Maastrict to Liège with great pomp and ceremonial, several neighboring bishops assisting. A church for the relics was built upon the site of the martyrdom, and was made a cathedral the following year, the see being removed from Maastricht to Liège, then only a small village. This laid the foundation of the future greatness of Liège, of which Lambert is honored as patron, and St. Hubert as founder and first bishop.

What, you just thought it was a brilliant idea somebody had to make all of that come about? Just do all that on a whim? It wouldn’t have happened at all without “vision”, literally. Speaking of visions,

Idolatry still lingered in the fastnesses of the forest of Ardennes–in Toxandria, a district stretching from near Tongres to the confluence of the Waal and the Rhine, and in Brabant. At the risk of his life, Hubert penetrated the remote lurking places of paganism in his pursuit of souls, and finally brought about the abolishment of the worship of idols in his neighborhood. Between Brussels and Louvain, about twelve leagues from Liège, lies a town called Tervueren, formerly known as Fura. Hither Hubert went for the dedication of a new church. Being apprised of his impending death by a vision, he there preached his valedictory sermon, fell sick almost immediately, and in six days died with the words “Our Father, who art in Heaven . . . ” on his lips.

Saving the souls of pagans…this guy is truly hard corps!

And he dies after delivering his magnum opus of a homily and gives up his spirit while praying the Our Father? It doesn’t get much better than that sports fans.

His body was deposited in the collegiate church of St. Peter, Liège. It was solemnly translated in 825 to the Abbey of Amdain (since called St. Hubert’s) near what is now the Luxemburg frontier; but the coffin disappeared in the sixteenth century. Very many miracles are recorded of him in the Acta SS., etc. His feast is kept on 3 November, which was probably the date of the translation. St. Hubert was widely venerated in the Middle Ages, and many military orders were named after him.

And why the heck not? What’s not to like about him? I don’t know about you, but I’m glad there are guys like him, praying for people like us, in Heaven right now.

Great St. Hubert, you were passionate about hunting, but when touched by Divine Grace, you put down your bow and took up the collar of Priesthood. Known for your miracles and the conversion of hundreds, you convinced others to worship and glorify Our Lord. Moved by your example, I implore your help. I ask for the Grace to follow in your footsteps and become a passionate disciple of Christ. Amen.

You can read more of this remarkable story over at the YIM Catholic Book Shelf . While you’re there, check out the poem The Apostle of the Ardennes too. Oh, and go check out the latest from Cracked: Six Saints with Superpowers Straight from the Marvel Universe. You’ll be glad you did.

August 12, 2012
Archdiocese of Singapore Hosts Theology of the Body Seminar Series
Next Post

August 13, 2012 If God Is A Bullet... (Music for Mondays)
Recent Comments
0 | Leave a Comment
Browse Our Archives
Related posts from Why I Am Catholic