For Something Old and Something New (Thoughts for Thursday) 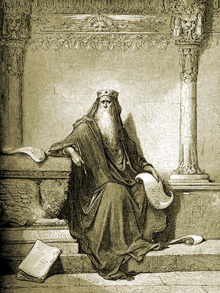 On Thursdays I serve as lector at the parish near my office. I’ve been the Thursday reader for a couple of years now and these days, I don’t even look ahead at the readings beforehand. There are two reasons for this. A) I like to be surprised and B) I found that I was often surprised anyway, as the readings for the day are often changed by the pastor to reflect the memorials for saints that the Daily Readings I found at the USSCB weren’t picking up on.

So now, I just say a prayer that I will read well, and then I head on up and dive in. Today, I was happily surprised to read aloud the words from my favorite Old Testament book, Ecclesiastes. I hope I wasn’t grinning too much as I launched into the classic beginning of Qoheleth’s riddle of life,

Vanity of vanities, says Qoheleth,
vanity of vanities! All things are vanity!
What profit has man from all the labor
which he toils at under the sun?
One generation passes and another comes,
but the world forever stays.
The sun rises and the sun goes down;
then it presses on to the place where it rises.
Blowing now toward the south, then toward the north,
the wind turns again and again, resuming its rounds.
All rivers go to the sea,
yet never does the sea become full.
To the place where they go,
the rivers keep on going.
All speech is labored;
there is nothing one can say.
The eye is not satisfied with seeing
nor is the ear satisfied with hearing.

What has been, that will be;
what has been done, that will be done.
Nothing is new under the sun.
Even the thing of which we say, “See, this is new!”
has already existed in the ages that preceded us.
There is no remembrance of the men of old;
nor of those to come will there be any remembrance
among those who come after them.

For his homily, our pastor mentioned how in the Hebrew scriptures, this book, along with the others we know as the Wisdom Books, are called “Writings” and are reserved for the last section of their canon.

This is, he said, because they represent “the present day,” as the Torah, or Laws (the first section) represent the past and the second section, the Prophecies, represent the future.  Re-reading passages from Ecclesiastes, I’m always struck by how they seem to apply to situations as if they were written last week. So fitting them into “the present” section makes sense to me.

Today’s Psalm (90) put a nice spin on the first reading as well,

In every age, O Lord, you have been our refuge.

You turn man back to dust,
saying, “Return, O children of men.”
For a thousand years in your sight
are as yesterday, now that it is past,
or as a watch of the night.

You make an end of them in their sleep;

the next morning they are like the changing grass,
Which at dawn springs up anew,
but by evening wilts and fades.

Teach us to number our days aright,
that we may gain wisdom of heart.
Return, O LORD! How long?
Have pity on your servants!

Enjoy life with the wife you love, all the days of the vain life granted you under the sun. This is your lot in life, for the toil of your labors under the sun. Anything you can turn your hand to, do with what power you have; for there will be no work, no planning, no knowledge, no wisdom in Sheol where you are going.

I would have loved to see the look on ‘ol Q’s face when Jesus descended into Hell to release the captives. “Thank God you’ve come! I was thinking we were going to be here forever. If I had to listen to Adam and Eve tell that story about the serpent one.more.time…”

Anyway, I learned something new today about the Hebrew Scriptures and thought I would share it with you, dear readers.

I also want to inform you that I may be a little quiet over the next few days. I’ll be gone readin’ and prayin’, as I do from time to time. I’ve picked up Journal of a Soul by Blessed John XXIII. Blame Deacon Bill Ditewig, as he tipped me off to this work by sharing this little jewel found in the appendices of Good Pope John’s journal, under the label Mirror of Piety,

Every time the boy Angelo Roncalli entered the presbytery of his parish priest at Sotto il Monte, Father Francesco Rebuzzini, his glance fell on an incription, framed and hanging on the wall, the words of which were said to be by St. Bernard, and which were never forgotten by him. 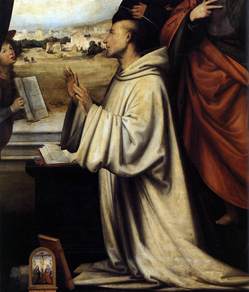 You can say that again. For even if it can’t be proved that Bernard of Clairvaux ever actually said them, or wrote them down, these thoughts make all kinds of sense.

And so I will be going off to get to know better the man who called The Council, without which I probably never would have become a Catholic. As it is, I sat in the pews for 18 years because I love my wife, and promised to raise our children as Catholics, etc. But if Mass had only been in Latin? I don’t think I’d have ever sat through Mass, let alone swim the Tiber.

Besides, I need to get to know better the guy who said stuff like this, and meant it, when he opened the Council, on October 11, 1962.

In the daily exercise of Our pastoral office, it sometimes happens that We hear certain opinions which disturb Us—opinions expressed by people who, though fired with a commendable zeal for religion, are lacking in sufficient prudence and judgment in their evaluation of events. They can see nothing but calamity and disaster in the present state of the world. They say over and over that this modern age of ours, in comparison with past ages, is definitely deteriorating. One would think from their attitude that history, that great teacher of life, had taught them nothing. They seem to imagine that in the days of the earlier councils everything was as it should be so far as doctrine and morality and the Church’s rightful liberty were concerned.

We feel that We must disagree with these prophets of doom, who are always forecasting worse disasters, as though the end of the world were at hand.

Amen! Isn’t that like a breath of fresh air? It’s like déjà vu all over again. Color me gone, sitting at the feet of this man, for a few days. 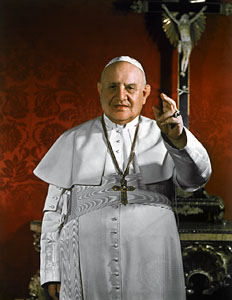 September 25, 2012
So, remember the original theme song to Gilligan's Island?
Next Post

September 28, 2012 Drafted By God, The Story of Frater Matthew Desme
Recent Comments
0 | Leave a Comment
Browse Our Archives
Follow Us!