“We Stand for Religious Freedom…”

You know, except for when we don’t.

“I have made it clear that the United States has a profound respect for people of all faiths,” Obama in his weekly address on Saturday. “We stand for religious freedom.”

The president was referring to last week’s attacks on U.S. embassies in the Middle East that killed four Americans, including U.S. Ambassador to Libya Chris Stevens.

More than 40 plaintiffs – including the Catholic Archdioceses of New York and Washington, and the University of Notre Dame – have filed a dozen separate lawsuits against the Obama administration’s Department of Health and Human Services, which has mandated that employer health insurance cover abortifacients, sterilization and contraception.

And when was the last time we spoke to Cardinal Dolan about this issue? Sometime around the Ides of March. But don’t worry, I’ve made a neat little video for all of you worry warts out there. Please…remain calm.

Trust me, okay? I know it’s ironic and all, but you also have to know that I will do whatever it takes to prevent needless loss of life overseas for the actions of a few blasphemous citizens of our own country, exercising their rights of free expression. Blasphemy cannot be tolerated, as any right thinking citizen knows.

Besides, our embassy in Oceania is still safe. All is well. 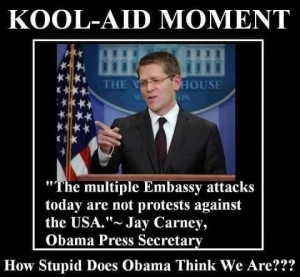 What’s that? What about the Marines killed and the six aircraft our enemies destroyed at Camp Bastion in Afghanistan over the weekend? I’ll have Jay Carney explain all that after he gets back from the mini-market around the corner. He said he needed some Maalox, or Rolaids, for some reason.

Here’s what you should do. To take your mind off of all these distractions, why don’t you just listen to some music or something?

And remember that today it’s Constitution Day. We cannot forget how important our “Charters of Freedom” are.

Have a happy one! *Ahem, anyone have an umbrella? I think Carney’s back with my smokes.*

September 19, 2012 The Real Casualties of the "War on Women..."UPDATED
Recent Comments
0 | Leave a Comment
Browse Our Archives
get the latest from
Catholic
Sign up for our newsletter
POPULAR AT PATHEOS Catholic
1