Because Christ is the King, Not Mammon

Because Christ is the King, Not Mammon November 25, 2012 Frank Weathers 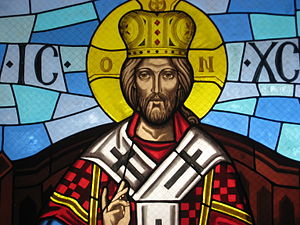 Because Christ is God and frankly, Mammon is a chump.

The Mammster is nowhere even close to having the qualities that we human beings crave and desire to emulate, follow, and become. Christ the King, though, smiling down on us from the banner collage, and the photograph above, and warming our hearts inside, has all of the qualities that we desire in abundance.

But the world wants you to believe that Mammon has all those, and is all important. The Mammster wants to be the center of your existence, and behind the curtain that controls him, is the little feller we call Beelzebub in the intellectual tradition. The “Prince of this World.” Or, where I come from, in the backwoods area of eastern Galilee, er I mean Tannersee, we just call him the Devil. Plain folk, see, don’t have no truck with calling things the way we see them.

Have you ever heard the INXS song The Devil Inside? Have a looky and a listen.

That there is pretty much all der Teufel, and his agent Mammon, have to offer you here in this temporal world. Doesn’t seem too appealing once you’ve grown up, does it? The same old stupid sins, replayed over and over again.

Theologically speaking, that phrase “the devil inside” is not quite correct anyway. Catholics believe that the Holy Spirit is inside, and we do so because Our King, whose feast we celebrate today (and every day) said things like “whatever you do for the least of these, you did unto me” to prove it.

But that song and video does nicely when trying to explain the silver dollar word concupiscence. A word that I never can spell right the first time around, as my spell-check program can testify to.

What does the”c” word mean? Many volumes have been written to describe it. Whole genres of literature have been invented around exploiting our yearning for the noble, the beautiful, and the True, but instead bagging the search our soul strives for and chasing pleasure. I’ll give you the best one-liner from the Catholic Encyclopedia and then continue on merrily with this post. Concupiscence is any yearning of the soul for good; in its strict and specific acceptation, a desire of the lower appetite contrary to reason. See? We mean well, and chase something else all the way to Perdition.

And Michael Hutchence, the lead singer of INXS (God rest his soul, he committed suicide close to this very day 15 years ago), was riffing off of the Holy Spirit inspired thoughts of St. Paul, whether he knew it or not. Paul writes in his epistle to the Romans,

I find then a law, that when I have a will to do good, evil is present with me. For I am delighted with the law of God, according to the inward man: but I see another law in my members, fighting against the law of my mind, and captivating me in the law of sin, that is in my members. Unhappy man that I am, who shall deliver me from the body of this death? (Romans 7:21-25)

The answer to Paul’s question, of course, is The One True King. But just because we know the answer, doesn’t mean living the answer is easy street. Hell, in a sense, is knowing the answer and then flunking the test when presented with situations that scare us. Recall our first pope Peter’s response to the reality of Jesus’ arrest. Peter denied the King soundly. You have probably been there a time or two as well. And if it isn’t because we’re afraid, it’s because we hunger for pleasure instead of for righteousness. But maybe I’m just speaking for myself.

So on a number of occasions, I’ve written on the subject of Mammon (aka “Economics” in the tag below). And nowadays, as the political climate moves from simmering to full boil, you may see more posts from me related to our allegiance to Mammon over Christ. Because telling the truth shames the Devil. 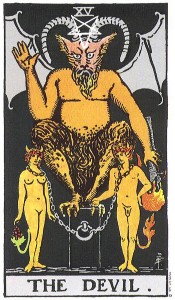 No, no, you argue. We are for Christ! We of the Christian Left “get it.” If only Mammon could be harnessed to help the poor and the disadvantaged, all would be well. And on the Christian Right? No, no, we are for Christ! Those lefties don’t care about the unborn at all. And those OWS people are all just slacker, hippie, weirdos, envious of us super-duper hard working wannabe rich Christians. Believe us when we say the “free market” is fair and prevents injustice.

Which leaves me right where it left me the other day. I am the enigma. I am why G.K. Chesteron’s books can barely be found in public libraries nowadays. I am infuriating to folks who bear allegiance to political tribes. I am not solely of one side, or of the other. I am trying to be whole, and therefore cannot be labeled or categorized. I am “full-spectrum” man, under construction. I am Catholic. I am an ambassador for Christ. And when it comes to Mammon, I am not afraid to challenge our present ages’ infatuation with him.

It feels strange for me to write “I am” like this on the feast of the monarchy of I Am. Say a prayer for me, will you dear reader?

I used to worship Mammon, you see, and pretend I was a good Christian. I never helped a single soul, except the unholy trinity of Me, Myself, and I. I believed fully in that same monster, too. I was Dicken’s Scrooge, except the ghosts never paid me a visit. Or if they did, I slammed the door in their faces and told them to blow it out their ears. Losers!

The other exception to being Scrooge? I was dirt poor. But I yearned to be rich. And I did it all while wrapping myself in the Flag.

True story: I was such a good and true disciple of the Mammster that I impressed the renowned banking firm of J.P.Morgan enough that they flew me from Los Angeles to New York City just to interview me for an internship. This was the Spring of my senior year at UCLA. There I am standing proudly in front of JPM’s HQ at Money Central, looking dapper in my Coat, All Weather, Trench, Dress. To be interviewed for an internship, Mother Morgan flew me coast-to-coast, put me up in a hotel, all on their shareholder’s dime. Sheesh.

I thank God now that they didn’t pick me for the job.

But at the time, I was like Michael Lewis’s dad, see? Lewis wrote Liar’s Poker back when my avaricious dreams fueled my desires, and my grade point average. Lewis became a bond trader for the august house of Salomon Brothers, and lived to tell the tale. At the time, I wanted to be just like him. Here’s what he said in the epilogue of the book about his dad, and faith in money.

My father’s generation grew up with certain beliefs. One of those beliefs is that the amount of money one earns is a rough guide to one’s contribution to the welfare and the prosperity of our society. I grew up unusually close to my father. Each evening I would plop into a chair near him, sweaty from a game of baseball in the front yard, and listen to him explain why such and such was true and such and such was not.

One thing that was almost always true was that people who made a lot of money were neat. Horatio Alger and all that. It took watching his son being paid $225 grand at the age of twenty-seven, after two years on the job, to shake his faith in money. He only recently recovered from the shock.

Do you, dear reader, think folks that make gargantuan amounts of money are “neat?”

I dare say that Mammon hopes you do. The situation in 1989 is kidstuff to the world our children live in now. They cannot, for example, watch a single sporting event on television today without homage being paid to Mammon openly in one way or another. I’m not talking about the commercials either. It doesn’t take much of a lull in the action to bring up such and such’s 45 million dollar contract deal, or such and such’s $5 million dollar bonus for winning the title du jour of name your favorite sport here.

Mammon has insinuated himself so thoroughly into the culture, that when a great play occurs, we’ll scream “that guy is MONEY!” into the mike and everyone will nod their head approvingly. And that’s during a college game, where the players are supposedly not paid a dime.

Perhaps our children can be forgiven for wishing they were “money” too. I tell them they’re priceless, but these days they aren’t acknowledging me affirmatively as much as they used to.

But like Michael Lewis and his dad, they’ll come around when the facts of life according to Mammon hit them like a ton of bricks. I pray that as a culture, we all wake up soon. In the meantime, I’ll just do what I can to keep Christ the King in his rightful place, which is in the center of my life.

November 21, 2012
About The Palestinian Christians in Gaza...UPDATED
Next Post

November 26, 2012 It's Cyber Monday, So Put Your Hard Earned Money Here
Recent Comments
1 Comment | Leave a Comment
Browse Our Archives
get the latest from
Catholic
Sign up for our newsletter
POPULAR AT PATHEOS Catholic
1