For All the Saints: John, Apostle and Evangelist UPDATED

Today is the feast day of St. John, the “disciple whom Jesus loved.” Jesus called him and his brother James the “sons of thunder,” so they must have been quite a lively pair. This is a portrait of the young John painted by El Greco.

What follows is the citation on John from Jesuit Father Francis Xavier Weninger’s book, Lives of the Saints. The subtitle to Weningers’ work is “Compiled from Authentic Sources” and here he helps me to better see the life of the only apostle and eyewitness of Our Lord that died a natural death.

St. John, Apostle and Evangelist of Jesus Christ, a brother of St James, and son of Zebedee and Salome, was born at Bethsaida, a town in Galilee. Christ, our Lord, called him and his brother James to follow Him, at the time when they were mending their nets in a boat on the shore of the Sea of Genesareth. John, without delay, left all he possessed, even his own father, and, with his brother, followed the Lord.

Although the youngest of the Apostles, he was beloved by the Savior above all the others; whence he is several times mentioned in the Gospel, as “the disciple whom Jesus loved.” The cause of this special love of Jesus for him, was, according to the Holy Fathers, his virginal purity, which he kept undefiled, and the tender love he bore to the Lord. “He was more beloved than all the other Apostles,” writes St. Thomas Aquinas, ” on account of his purity.” “For the same reason,” says St. Anselm, “God revealed more mysteries to him than to the other Apostles. Justly,” says he, “did Christ the Lord reveal the greatest mysteries to him, because he surpassed all in virginal purity.”

It is evident from the Gospel that St. John was one of the most intimate of the friends of the Lord, and was, in consequence, sometimes admitted into Christ’s presence, when, except Peter and James, no other Apostle was allowed to be near. Thus, he was with Christ when He healed the mother-in-law of Peter; when He raised the daughter of Jairus from the dead; and when He was transfigured on Mount Tabor. He also accompanied Christ when He suffered His agony in the Garden of Olives.

The other two above-named Apostles shared these favors with John; but none was permitted to lean upon the Savior’s bosom, at the last supper, save John; none was recommended as son to the divine Mother, but John. Only he, of all the Apostles, followed Christ to Mount Calvary, and remained there with Him until His death. To recompense this love, Christ gave him to His Mother as her son, when He said: “Behold thy Mother!” Christ, who had lived in virginal chastity, would trust His Virgin Mother to no one else but John, who himself lived in virginal purity. As St. Jerome says: “Christ, a virgin, recommended Mary, a virgin, to John, a virgin.”

No greater grace could John have asked of Christ; no more evident proof could he have received of His love. The most precious thing which the Lord possessed on earth, His holy Mother, He commended to His beloved disciple. He took him as brother, by giving Him as son to His mother. Who cannot see from all this that Christ loved and honored St. John above all others? 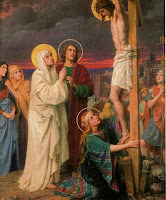 How deeply this beloved disciple must have suffered by seeing his Savior die so ignominious a death, is easily to be conceived; and St. Chrysostom hesitates not to call him, therefore, a manifold martyr. After Christ had died on the Cross, had been taken from it, and interred with all possible honors, St. John returned home with the divine Mother, who was now also his mother, and waited for the glorious resurrection of the Lord. When this had taken place, he participated in the many apparitions of the Lord, by which the disciples were comforted, and doubtless received again particular marks of love from the Savior.

He afterwards assisted, with the divine Mother and the Apostles, and other disciples of Christ, at the wonderful Ascension of the Lord. With these, also, he received, after a ten days’ preparation, the Holy Ghost, on the great festival of Pentecost. Soon after this, he and Peter had, before all others, the grace to suffer for Christ’s sake. For when these two Apostles had, in the name of Christ, miraculously healed a poor cripple who was lying at the door of the temple of Jerusalem, and improved this opportunity to show to the assembled people that Jesus of Nazareth was the true Messiah, they were seized, at the instigation of the chief priests, and were cast into prison. 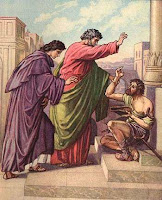 On the following day, the priests came together, and John and Peter were called before them, and asked in whose name, and by what power they had healed the cripple. Peter and John answered fearlessly, that it had been done in the name of Jesus Christ. The high priest dared not do anything further to them, but, setting them free, prohibited them from preaching, in future, the name of Christ. The two holy Apostles, however, nothing daunted, said: “If it be just in the sight of God to hear you rather than God, judge ye: for we cannot but speak the things which we have seen and heard.”

St. John remained for some time in Jerusalem after this, and, with the other Apostles, was zealous in his endeavors to convert the Jews. When the Apostles separated, to preach the gospel over all the world, Asia Minor was assigned to St. John. Going thither, he began with great zeal his apostolic functions, and, by the gift of miracles, he converted many thousands to the faith of Christ. The many bishoprics which he instituted in the principal cities sufficiently prove this.

In the course of time, he went also to other countries, preaching everywhere, with equal success, the word of Christ. The Emperor Domitian, who, after the deaths of the Emperor Nero, again began to persecute the Christians, ordered his officers to apprehend John, and bring him to Rome. Hardly had the holy Apostle arrived there, when he was commanded by the Emperor to sacrifice to the gods.

As the Saint refused this, and fearlessly confessed Christ, the Emperor had him most cruelly scourged, and afterwards cast into a large caldron, filled with boiling oil. The Saint signed himself and the caldron with the holy cross, and remained unharmed when he was cast into it. This gave him an opportunity to announce, with great energy, to the assembled people, the gospel of Jesus Christ.

The tyrant, who could not suffer this, had him taken out of the caldron, and sentenced him to banishment on the island of Patmos, to work in the mines, and perform other hard labor, in company with other Christians. St. John had, at that time, reached his ninetieth year, but was willing to undergo the unjust sentence.

After his arrival on the island, he had many and wonderful visions, which, by command of God, he put down in writing. The book which contains them is a part of Holy Writ, called the Apocalypse, or Revelation of St. John, a book which, according to St. Jerome, contains almost as many mysteries as words. After the death of Domitian, St. John was liberated, and returning to Ephesus, remained there until his death. 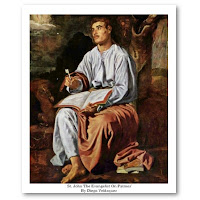 He outlived all the other Apostles, as he reached the age of 1oo years. His great labors, wearisome travels, and the many hardships he endured, at last enfeebled him to such an extent, that he could not go to the church without being carried. Frequently he repeated, in his exhortations, the words: “My little children, love one another.” Some, annoyed at this, asked him why he so often repeated these words. He answered: “Because it is the commandment of the Lord; and if that is done, it suffices.” By this he meant, that if we love each other rightly, we also love God; and when we love God and our neighbor, no more is needed to gain salvation; as love to God and to our neighbor contains the keeping of all other commandments.

The holy Apostle, who had suffered and labored so much for his beloved Master, was, at length, in the year 104, called by Him into heaven to receive his eternal reward.


You can read the complete citation at the YIMCatholic Bookshelf.

Fr. Michael Cummings: St. John and the Mystery of the Incarnation

The New Theological Movement: What we know of Jesus’ life from St. John alone…

December 28, 2012 A Batman & Robin Christmas Present for YIMCatholic Readers...
Recent Comments
0 | Leave a Comment
"Vaya con Dios, Leonard; Rest in Peace."
AnonCollie Leonard Nimoy Explains The Origin Of ..."
"Thank you for sharing"
Andy To Break My Fast from Being ..."
"I've seen Matt Maher live four times...twice since this song was released. I absolutely love ..."
Veritas81 WYD Flashback With Matt Maher, And ..."
"Yes, and Dolan should have corrected the scandalous and wrong decison of his predecessor when ..."
sixbunnies Archdiocese of New York Health Plan ..."
Browse Our Archives
Follow Us!