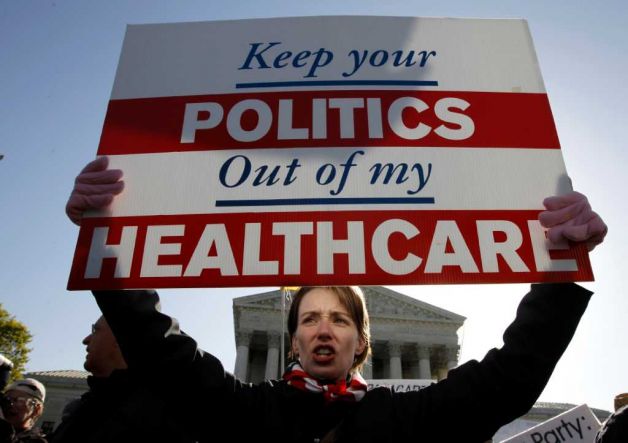 Yesterday, prior to the Inauguration Day ceremonial swearing, the Washington Post ran an article detailing the challenges made thus far to the Administrations’ HHS Mandate.

The mandate, as folks recall, requires employers (aside from a narrow field of exempt employers) who provide health insurance, if they have at least 50 employees, to provide co-payment free coverage of birth control pills, abortifacients, sterilization procedures, and access to abortion services.

In the first part of the article, Robert Barnes gives folks a good recap of the cases that have come before the courts up to this point.

The cases differ by what the business owners say they are willing to provide — some say all contraceptives would violate their religious beliefs, others object only to abortifacients such as the “morning-after pill” and intrauterine devices. But all rely on protections in the First Amendment regarding free exercise of religion and in the Religious Freedom Restoration Act (RFRA).

The 1993 act prohibits the federal government from imposing a “substantial burden” on a person’s exercise of religion unless there is a “compelling governmental interest” and the measure is the least-restrictive method of achieving the interest.

No court of appeals has reached the merits of the challenges, but two — the 7th and 8th circuits in Chicago and St. Louis respectively — have granted business owners injunctions, and two — the 6th in Cincinnati and the 10th in Denver — have denied them.

And along the way, those decisions give a pretty clear indication of the fight ahead.

In the second part of the article, he drills down into the details of the injunction awarded to Korte & Luitjohan, Contractors Inc. right before the New Year, while touching on the possible reasons why Hobby Lobby’s request for relief was denied.

The most promising for the challengers is a ruling by a three-judge panel of the 7th Circuit. Cyril and Jane Korte, owners of K & L Contractors, said the new law offends their Roman Catholic beliefs. They wanted to replace the insurance program they offered their workers, which they found provided contraceptive services, with one that did not.

The Kortes made their main challenge under RFRA. The government opposed, saying that, among other things, RFRA did not apply to corporations, and that whether their employees took advantage of contraceptive services had no impact on the Kortes’ practice of religion.

The panel split 2 to 1 for the Kortes. “The contraception mandate applies to K & L Contractors as an employer of more than 50 employees, and the Kortes would have to violate their religious beliefs to operate their company in compliance with it,” wrote Circuit Judges Joel M. Flaum and Diane S. Sykes in granting the couple an injunction.

They suggested the corporation had rights under RFRA by citing the Supreme Court’s decision in Citizens United v. Federal Election Commission, which said corporations at least had political speech rights under the First Amendment.

Circuit Judge Ilana Diamond Rovner disagreed. “What the Kortes wish to do is to preemptively declare that their company need not pay for insurance which covers particular types of medical care to which they object,” she wrote. If that were right, she added, what limits might apply to employers limiting coverage.

That is essentially what judges in the 10th Circuit found regarding the company Hobby Lobby, which has 500 stores in 41 states. “It is by God’s grace and provision that Hobby Lobby has endured,” founder and CEO David Green said in a statement.

But the judges in the Hobby Lobby case said that Green’s exercise of religion was not affected by the decisions of his workers. It is only after a “a series of independent decisions by health care providers and patients” that Green’s health care plan might subsidize an activity to which he objects, the court said.

I don’t pretend to know what David Green has in mind in regard to decisions of his workers that he might, or might not, object too. But as we fiddle around with the concept of government mandates tacked on to employer sponsored healthcare plans (and on to government sponsored health plans for those not covered by employer plans) an obvious solution popped into my head. And unlike, say the dream of a handgun that can only be fired by its hand-scanned owner of record, the solution seems pretty feasible given our ability to make choices amongst various levels of  health insurance coverage today.

In a nutshell, in regards to the contraception/abortifacients/sterilization/abortion area, why not split folks up into separate risk pools for those who want these coverages, and who are willing to pay an additional premium surcharge for them, and another risk pool for those who do not want these coverages? Why is the Administration so set on pursuing the 19th Century version of “progress” (you must choose this coverage, whether you agree to it or not) vs. the 21st Century version of progress that folks have come to know and love in virtually every other aspect of our lives?

Sure, the HHS Mandate could be modified in the future to allow individual employees the opportunity to decide for themselves whether they need/want contraceptive, abortifacient, and sterilization services. But that is not the case right now, which is why there is a problem.

So why not provide a few options that would allow folks to make their own choices to do things contrary to the teachings of various faith groups, or not? Splitting folks up into risk pools like this would make things a lot less troublesome for businesses owned by folks who find these services objectionable when they are coerced (read: forced by government to sin against conscience and creed) into supporting them.  If beneficiaries of the coverage had a choice, see, they would be able to sin (or not) on their own time, and on their own dime, like we all usually do anyway. I don’t think David Green would object to this, though some health commissar could.

The alternative is the status quo.  The Administration can continue to clog the courts fighting against good law, and common sense, on the road to a pyrric victory (if not an epic loss) for their unflinching support of population control at the cost of religious liberty for all.

Speaking of which, it appears that Stanford University sees a new growth market headed in that direction.

January 22, 2013 L.A. County District Attorney Reviewing Documents Released by Archdiocese of Los Angeles UPDATED
Recent Comments
0 | Leave a Comment
"Vaya con Dios, Leonard; Rest in Peace."
AnonCollie Leonard Nimoy Explains The Origin Of ..."
"Thank you for sharing"
Andy To Break My Fast from Being ..."
"I've seen Matt Maher live four times...twice since this song was released. I absolutely love ..."
Veritas81 WYD Flashback With Matt Maher, And ..."
"Yes, and Dolan should have corrected the scandalous and wrong decison of his predecessor when ..."
sixbunnies Archdiocese of New York Health Plan ..."
Browse Our Archives
Follow Us!