It’s time for some more bubbly. Were the courts in session yesterday, or what? Though I was on vacation, see, the answer to that question is “yes,” even if they got down to business quick, and closed down early for New Years Eve. First, we heard of Kort & Luitjohan’s good news, then an injunction handed to Tom Monaghan’s company,  and now there’s another reason for a toast.

Late yesterday, a federal court in St. Louis granted a temporary restraining order against the HHS mandate in favor of yet another for-profit business — Sharpe Holdings, Inc., a Missouri dairy farming, creamery and cheese making company. For those keeping score at home, to date 9 for-profit companies have obtained injunctions against the mandate, 3 have been denied.

As the folks at the Becket Fund remind us, 9-3 is a pretty good record.

Here is a brief snippet from the order handed down by the court yesterday (bold highlights are mine).

Plaintiffs argue that they will suffer irreparable harm due to deprivation of First  Amendment freedoms and violations of RFRA. They have shown that they must act  immediately to implement a new employee health plan due to its January 1, 2013 renewal  date in compliance with the law. Injunctive relief will permit plaintiffs to implement a plan consistent with their religious beliefs without the threat of liabilities imposed due to failure to follow the arguably unconstitutional ACA mandate.

Plaintiffs further argue that any arguments that injunctive relief would harm the  government are frivolous. According to plaintiffs, the government has stayed imposition of  the ACA mandate upon thousands of employers and millions of employees, and that the  government cannot argue convincingly that injunctive relief in this case would cause it any harm. Whether or not plaintiffs’ argument in this regard is accurate, it has not been shown to be otherwise at this time. Further proceedings may contest this issue.

The court concludes that the balance of harms presented at this time tips clearly in  favor of the plaintiffs. The court is not strongly persuaded by the government’s arguments  that plaintiffs’ delay in bringing these proceedings for 16 months should work against their entitlement to short term injunctive relief. No substantial case has been shown for the government being prejudiced by this passage of time.

The court has concluded that plaintiffs are entitled to injunctive relief that  maintains the status quo until the important relevant issues have been more fully heard.

For the reasons stated above,

IT IS HEREBY ORDERED that the motion of plaintiffs Sharpe Holdings, Inc.,  Charles N. Sharpe, Judi Diane Schaefer, and Rita Joanne Wilson for a temporary  restraining order is sustained.

Read the court order in its entirety here.

And so another small, for-profit, business has  won a reprieve from the oligarchs of the Administration. Pretty quick work, for an action that was filed just a few weeks back on December 20, 2012. 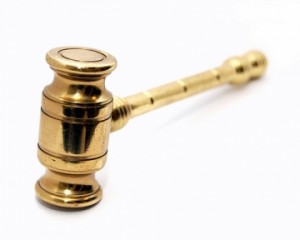 January 3, 2013 Mike Huckabee on Hobby Lobby: "We will stand with them in their resistance."
Recent Comments
0 | Leave a Comment
Browse Our Archives
Follow Us!