Call Me A Bad Catholic, But I Agree With John Zmirak

Call Me A Bad Catholic, But I Agree With John Zmirak January 23, 2013 Frank Weathers 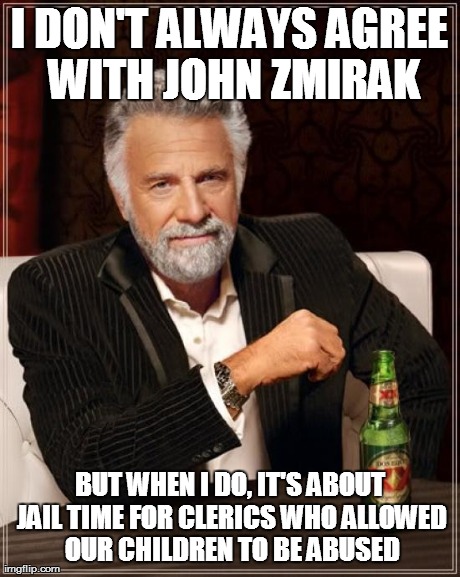 Amen to what The Most Interesting Man in the World says. This may come as no surprise to long-time readers of YIMCatholic, but to newcomers, maybe. Let me allow John Zmirak, author of The Bad Catholic’s Guide series of books to explain the meme above.

In light of the cold, documentary proof that has emerged of retired L.A. Cardinal Roger Mahony conspiring to hide pedophiles from the cops, I’d like to share the relevant section from The Bad Catholic’s Guide to the Catechism. In a just world, mine would be one of the books Mahony would be reading in a very small cell at Alcatraz.

Tragically, they don’t. It’s important that faithful Catholics not blow smoke up their own skirts, or pretend that the scandal that erupted in 2002 and has dragged on for another ten years was somehow invented or exaggerated by anti-Catholic journalists. In this case, and perhaps this case alone, those anti-Catholic journalists were doing their jobs and thank God for them. (Did the Hebrew prophets thank God for the Assyrians?) While only a tiny percentage of priests—no higher than occurs in other groups that deal with young people—proved to be offenders, The Dallas Morning News documented that year the fact thattwo-thirds of U.S. bishops were involved in cover-ups of sex abuse. Most of those bishops are still in place, and only one (far from the worst) Cardinal Bernard Law, was forced out of office for this kind of blatant disregard for the safety and souls of children. The rest will retire in peace, and go off to play golf until they meet their eternal reward. (So will the many prosecutors and cops who refused to investigate parents’ complaints.) Which just goes to show that the pope’s day-to-day decisions aren’t infallible, either.

Another unspoken, tragic aspect of the sex abuse crisis is the negligence of prosecutors. That is the only explanation why at least a few of those faithless shepherds aren’t wearing their proper garb: bright prison orange.

It would be a worthy work of Corporal Mercy to visit them in jail, you know. And while we’re on the subject, might I add that nowadays, whether you are a layman, religious, or a member of the clergy, your first call, if you happen upon criminal malfeasance, should be to the police.  Seriously.  Call the cops first, then notify the bishop.

You see, it’s like I said long ago. Serious people with guns and badges looking for bad guys tend to get things done a little quicker than the average bureaucracy.

January 23, 2013
Deficits, Spending and the Debt-Limit Vote: What Matters Most?
Next Post

January 24, 2013 For All the Saints: St. Francis de Sales
Recent Comments
0 | Leave a Comment
Browse Our Archives
get the latest from
Catholic
Sign up for our newsletter
POPULAR AT PATHEOS Catholic
1

Benedict XVI Comes Out Of Retirement,...
Coffee & Crucifix
Related posts from Why I Am Catholic