For the Faith and Witness of Stan Musial, Requiescat in Pace

For the Faith and Witness of Stan Musial, Requiescat in Pace January 19, 2013 Frank Weathers

This originally ran back when Spring Break was just getting underway in 2011, and he had just been awarded the Presidential Medal of Freedom. But tonight, I just learned that “Stan the Man” has passed on to eternity. Pray for his soul and for the consolation of his family. Then, have a look at the life and example of this good man.

Eternal rest grant unto him, O Lord, and let perpetual light shine upon him. May the souls of the faithful departed, through the mercy of God, rest in peace. Amen. 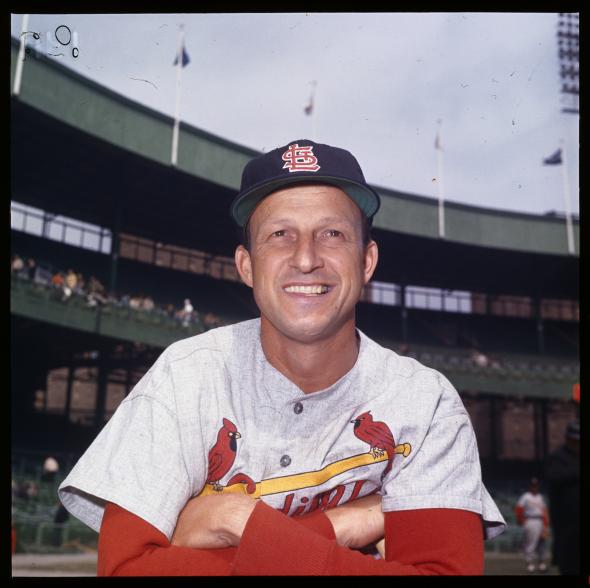 I saw a press release today from the Catholic News Service about three Catholics who were awarded the Presidential Medal of Freedom at the White House.

Pardon me if I ignore the other two, because as a baseball dad, the only part of the announcement that I saw was the one that was about the Hall of Famer. Stan “the Man” Musial was one of the honorees!

You may think that sports doesn’t matter in the scheme of things. You regard what Blaise Pascal thinks about sports being even the “pursuit of kings” as being silly. Sports doesn’t matter because it doesn’t cure cancer, or get us to the Moon and back, or whatever. If you feel this way, good for you! But I feel sorry for you, because sports does still provide the inspiration that many, nay most, more tangible pursuits don’t, won’t or can’t.

I mean seriously, King David and the Apostle Paul dipped into sports analogies a number of times. If St. Paul “gets it” regarding the spirit of an athlete, perhaps you should too. Anyway, let me just have some fun celebrating the life of the life-long St. Louis Cardinal named Stan Musial. Besides, Spring Training has started, which is an even better predictor than Punxsutawney Phil that Winter is almost over!

I didn’t even know that he was a Catholic, until today. But I did know this about him:

So the only problem you may have with “the Man” is that he didn’t play for your favorite team?! Move past that,  my Catholic sports fan brethren, as you check out this excerpt from Stan’s biography,

from Stan Musial: a Biography by Joseph Stanton

Some of Stan’s virtures seem almost of a Victorian nature, and are, therefore, difficult to discuss in the booze-and-broads context of the typical behind-the-scenes sports story. It is clear that he was devoted to his parents and deeply sensitive about the telling of any tales that would make clear the full extent of the poverty of his family as he was growing up. Broeg and other sports writers were sternly admonished by Stan not to comment at any length on the home that Stan grew up in, although Stan did eventually take Broeg to see it.

Stan, by all accounts, adored his wife Lil (ed. 71 years, 11 months and 9 days until her death on May 3, 2012!) and pointedly refused any and all offered opportunities to be disloyal to her. Many have noted his dedication to church attendance. He was (ed. is!) a Catholic who did not think it acceptable to miss Mass. One of Stan’s children reported to Giglio that among the few things their father could be stern about were instances when family members wanted to allow sleepiness to get in the way of getting up for church.

Musial’s disciplined concentration was, no doubt, undergirded by his faith. Not overtly religious outside of church, Stan was, nonetheless, spiritually disciplined at the bat and in his life. Concentration was always key. He finally had to retire from playing, not so much because of a decline in physical ability, but because of the fall-off he noticed in 1963 in his ability to concentrate at bat.

You can read more here (or head to the library).

Bernie Miklasz, of STLToday.com has a great write up on Stan from the White House. Here is my favorite part,

The White House could honor Musial — but it could not hope to contain him.

Lillian Musial, who has been married to The Man for only 70 years (ed. see above), smiled and spoke for Cardinals fans everywhere when she said, “Wonders never cease with my husband.”

Musial was still proudly wearing the medal as he paused to speak to reporters for a few minutes late Tuesday afternoon outside the White House. He sat in his wheelchair, wearing leather gloves to ward off the chill, with two of his daughters gently rubbing his shoulders to generate additional warmth.

To Stan’s immediate left was his beloved Lil, also seated in a wheelchair. They were surrounded by their four children, son Dick and daughters Gerry, Janet and Jean.

It was a poignant moment, just seeing Stan and Lil and all of the Musials standing outside the White House, brimming with such obvious and warranted pride.

The Musials have been sweethearts since age 16 back in Donora, Pa. They were married on May 25, 1940. This was one of the most endearing aspects to this grand occasion: that Stan and Lil could share this blessed, once-in-a-lifetime experience with each other.

“I’ve always been proud of Stan from the very first day we met at 16 years old,” Lil said. “It’s been a long life and it’s been really wonderful.”

You know what, I can’t make it into the Baseball Hall Of Fame in Cooperstown. But I am going to do my level best to follow Stan and Lillian into the Marriage Hall of Fame! Now lets get to the video portion of this post, shall we?

Did I mention that Stan could play the harmonica? You just gotta love this! Especially because I read that he played his Hohner at the White House too. That surprised everyone except his wife Lillian.

Sing along with this one folks. Whaat? You don’t know the words?! Learn them and share this with your kids!

Check out this classic episode from What’s My Line.

And then there is this,

“The Man is so cool, that Pope John Paul II had Stan and Lil travel to the Vatican in Rome to be his guests at dinner. And Musial was among the primary reasons why Pope John Paul II visited St. Louis in January 1999.”

Stan Musial is a gift to baseball and to all of us. Say a prayer thanking the Good Lord for witnesses such as him and his wife Lillian.

My bishop gave the homily at Stan Musial’s funeral Mass.

And Earl Weaver has passed on too? Another legend. God is making his draft picks today. 😉

January 20, 2013 The Crescat on the Bishops' Novena to End Abortion...
Recent Comments
0 | Leave a Comment
"Vaya con Dios, Leonard; Rest in Peace."
AnonCollie Leonard Nimoy Explains The Origin Of ..."
"Thank you for sharing"
Andy To Break My Fast from Being ..."
"I've seen Matt Maher live four times...twice since this song was released. I absolutely love ..."
Veritas81 WYD Flashback With Matt Maher, And ..."
"Yes, and Dolan should have corrected the scandalous and wrong decison of his predecessor when ..."
sixbunnies Archdiocese of New York Health Plan ..."
Browse Our Archives
get the latest from
Catholic
Sign up for our newsletter
POPULAR AT PATHEOS Catholic
1