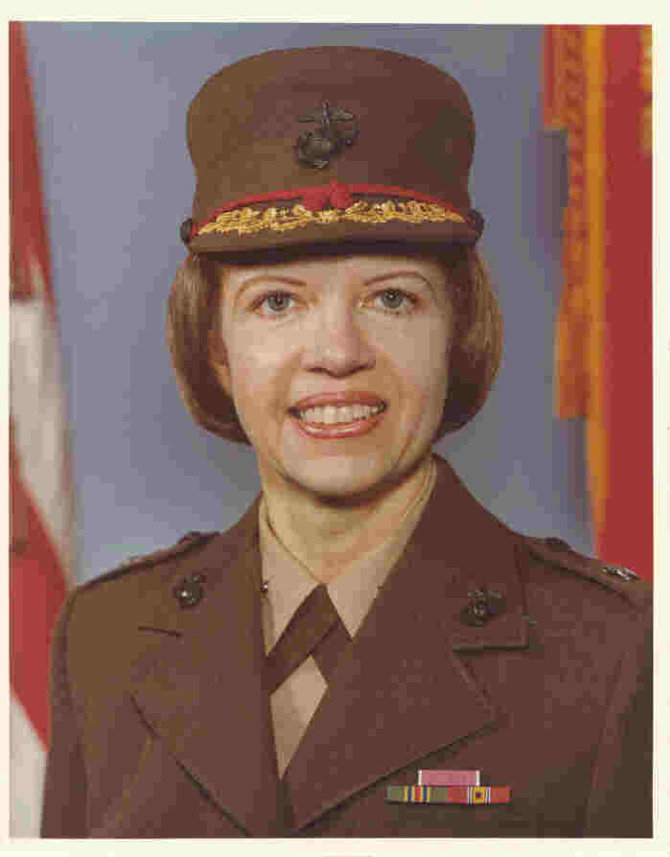 I just happened upon this news when I saw it on the official Facebook page of the U.S. Marine Corps (Marines) with this message,

“Brigadier General Brewer was an amazing and courageous woman who has left an indelible mark on the rich legacy of our Corps, and she will be missed.”

Brig. Gen Brewer passed away Jan. 2. Her funeral mass will be held Monday at the Cathedral of St. Thomas More in Arlington, Va.

Catholic Herald.com, out of Arlington Virginia,  noted her passing with a nod to her career in the Marine Corps as well as to her service to others through Catholic Charities and in her parish.

Brewer was born in Durand, Mich., in 1930. She attended elementary school in Michigan, but graduated from the Catholic High School of Baltimore. After graduation, she enrolled at the University of Michigan at Ann Arbor where she earned a bachelor’s degree in geography in 1952. She was commissioned as a second lieutenant in the Marine Corps that same year.

Brewer retired from active duty in 1980. She was awarded two Legion of Merit medals for exceptional meritorious service.

In 1981, she was appointed acting director of volunteers for Arlington diocesan Catholic Charities, beginning a long association with the agency that included serving as chair of the Planning and Development Committee for Catholic Charities.

Brewer was a parishioner of the Cathedral of St. Thomas More in Arlington and was active in the Brent Society.

Father Robert J. Rippy, rector, said that until recently, Brewer had been active at the Cathedral for years serving as a lector. He got to know her when she served on the Catholic Charities Ball Committee.

“(She was) a very classy lady,” said Father Rippy.

The funeral Mass will be offered Jan. 14 at the Cathedral of St. Thomas More at 10 a.m. Interment will follow at Columbia Gardens Cemetery in Arlington.

The Marines’ Facebook page included a write up on her life and career from Headquarters Marine Corps entitled, Woman of Many Firsts:First Marine Female General Blazed Trail for Others to Follow.

Go check it out, and say a prayer for her.

January 10, 2013
Being Conan the Barbarian vs. Being Civil (The Lost Art of Persuasion) UPDATED
Next Post

January 12, 2013 Ignoring the Teachings of the Church is like Flying by the Seat of Your Pants Directly Toward the Ground
Recent Comments
0 | Leave a Comment
"Vaya con Dios, Leonard; Rest in Peace."
AnonCollie Leonard Nimoy Explains The Origin Of ..."
"Thank you for sharing"
Andy To Break My Fast from Being ..."
"I've seen Matt Maher live four times...twice since this song was released. I absolutely love ..."
Veritas81 WYD Flashback With Matt Maher, And ..."
"Yes, and Dolan should have corrected the scandalous and wrong decison of his predecessor when ..."
sixbunnies Archdiocese of New York Health Plan ..."
Browse Our Archives
get the latest from
Catholic
Sign up for our newsletter
POPULAR AT PATHEOS Catholic
1