For this Hymn by St. Thomas Aquinas (Zion, To Thy Savior Singing)

For this Hymn by St. Thomas Aquinas (Zion, To Thy Savior Singing) January 28, 2013 Frank Weathers 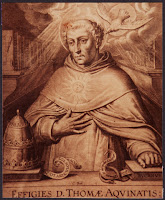 I am late in coming around to an appreciation of St. Thomas Aquinas. As the old saw goes, better late than never. Jacques Maritain’s book The Peasant of the Garonne has pointed me towards learning more about this Doctor of the Church.

G.K. Chesterton wrote a book about him too. Here are a few of G.K.C.’s words to prime the pump so to speak,

St. Thomas was a huge heavy bull of a man, fat and slow and quiet; very mild and magnanimous but not very sociable; shy, even apart from the humility of holiness; and abstracted, even apart from his occasional and carefully concealed experiences of trance or ecstasy. St. Francis was so fiery and even fidgety that the ecclesiastics, before whom he appeared quite suddenly, thought he was a madman. St. Thomas was so stolid that the scholars, in the schools which he attended regularly, thought he was a dunce. Indeed, he was the sort of schoolboy, not unknown, who would much rather be thought a dunce than have his own dreams invaded, by more active or animated dunces. This external contrast extends to almost every point in the two personalities. It was the paradox of St. Francis that while he was passionately fond of poems, he was rather distrustful of books. It was the outstanding fact about St. Thomas that he loved books and lived on books; that he lived the very life of the clerk or scholar in The Canterbury Tales, who would rather have a hundred books of Aristotle and his philosophy than any wealth the world could give him. When asked for what he thanked God most, he answered simply, “I have understood every page I ever read.”

Did you know that when Thomas decided to join the Dominican order, his family wasn’t too thrilled?  It seems he didn’t ask their permission. In fact, early on, his brothers kidnapped him when he was on his way back to the order after a visit home. They sat on him in a castle for about a year. But, the stubborn ox wouldn’t change his mind, so they let him go. We’re all the better for it, no doubt.

And he wasn’t a grind, either. Peter Kreeft reminds us of this in the footnotes of his A Summa of the Summa, where he quotes our saint saying,

Jokes and plays are words and gestures that are not instructive but merely seek to give lively pleasure. We should enjoy them. They are governed by the virtue of witty gaiety to which Aristotle refers and which we call pleasantness. A ready-witted man is quick with repartee and turns speech and action to light relief. It is against reason to be burdensome to others, showing no amusement and acting as a wet blanket. Those without a sense of fun, who never say anything ridiculous, and are cantankerous with those who do, these are vicious, and are called grumpy and rude.

Heh! No “sour-faced saint,” he. I wonder what his favorite beer is?

Another side of Thomas that gets short shrift is his pastoral and poetic side. On his feast day today, I’ll share one of his prayerful hymns. I don’t believe he was thinking of this piece when he claimed that all he had written was “so much straw.”

Zion, To Thy Savior Singing

To thy Prince and Shepherd bringing,
Sweetest hymns of love and praise,
Thou wilt never reach the measure
Of His worth, by all the treasure
Of thy most ecstatic lays.

Of all wonders that can thrill thee,
And, with adoration fill thee,
What than this can greater be,
That Himself to thee He giveth?
He that eateth ever liveth,
For the Bread of Life is He.

Fill thy lips to overflowing
With sweet praise, His mercy showing
Who this heav’nly table spread:
On this day so glad and holy,
To each longing spirit lowly
Giveth He the living Bread.

Here the King hath spread His table,
Whereon eyes of faith are able
Christ our Passover to trace:
Shadows of the law are going,
Light and life and truth inflowing,
Night to day is giving place.

Lo, this angels’ food descending
Heavenly love is hither sending,
Hungry lips on earth to feed:
So the paschal lamb was given,
So the manna came from Heaven,
Isaac was His type indeed.

O Good Shepherd, Bread life giving,
Us, Thy grace and life receiving,
Feed and shelter evermore;
Thou on earth our weakness guiding,
We in Heaven with Thee abiding,
With all saints will Thee adore.

St. Thomas Aquinas, pray for us.

January 27, 2013
All of a Sudden, the New York Times Notices the HHS Mandate Lawsuits
Next Post

January 28, 2013 The Film You've Supported Has A New Extended Trailer
Recent Comments
0 | Leave a Comment
"Vaya con Dios, Leonard; Rest in Peace."
AnonCollie Leonard Nimoy Explains The Origin Of ..."
"Thank you for sharing"
Andy To Break My Fast from Being ..."
"I've seen Matt Maher live four times...twice since this song was released. I absolutely love ..."
Veritas81 WYD Flashback With Matt Maher, And ..."
"Yes, and Dolan should have corrected the scandalous and wrong decison of his predecessor when ..."
sixbunnies Archdiocese of New York Health Plan ..."
Browse Our Archives
get the latest from
Catholic
Sign up for our newsletter
POPULAR AT PATHEOS Catholic
1