All of a Sudden, the New York Times Notices the HHS Mandate Lawsuits 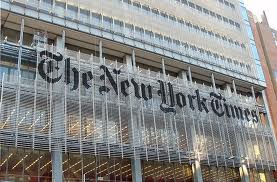 Based on this report published yesterday, you would think that they just discovered the 40+ lawsuits that have been filed and the injunctions that have been handed down thus far. How else to explain the title of the piece? A Flood of Suits Fights Coverage of Birth Control.

I’ll skip most of the article, and skip right to the interesting parts.

“This is highly likely to end up at the Supreme Court,” said Douglas Laycock, a law professor at the University of Virginia and one of the country’s top scholars on church-state conflicts. “There are so many cases, and we are already getting strong disagreements among the circuit courts.”

President Obama’s health care law, known as the Affordable Care Act, was the most fought-over piece of legislation in his first term and was the focus of a highly contentious Supreme Court decision last year that found it to be constitutional.

But a provision requiring the full coverage of contraception remains a matter of fierce controversy. The law says that companies must fully cover all “contraceptive methods and sterilization procedures” approved by the Food and Drug Administration, including “morning-after pills” and intrauterine devices whose effects some contend are akin to abortion.

And here is where you think you’ve stepped back in time. What follows next reads like what should have been reported a year ago.

As applied by the Health and Human Services Department, the law offers an exemption for “religious employers,” meaning those who meet a four-part test: that their purpose is to inculcate religious values, that they primarily employ and serve people who share their religious tenets, and that they are nonprofit groups under federal tax law.

But many institutions, including religious schools and colleges, do not meet those criteria because they employ and teach members of other religions and have a broader purpose than inculcating religious values.

Yes, Gotham readers, because the standard is too narrow. So narrow that if you aren’t serving those of your own faith, or actively proselytizing others, you don’t qualify as exempt. Helping the sick and the poor, or educating the masses? Not exempt.

“We represent a Catholic college founded by Benedictine monks,” said Kyle Duncan, general counsel of the Becket Fund for Religious Liberty, which has brought a number of the cases to court. “They don’t qualify as a house of worship and don’t turn away people in hiring or as students because they are not Catholic.”

In that case, involving Belmont Abbey College in North Carolina, a federal appeals court panel in Washington told the college last month that it could hold off on complying with the law while the federal government works on a promised exemption for religiously-affiliated institutions. The court told the government that it wanted an update by mid-February.

Defenders of the provision say employers may not be permitted to impose their views on employees, especially when something so central as health care is concerned.

“Ninety-nine percent of women use contraceptives at some time in their lives,” said Judy Waxman, a vice president of the National Women’s Law Center, which filed a brief supporting the government in one of the cases. “There is a strong and legitimate government interest because it affects the health of women and babies.”

She added, referring to the Centers for Disease Control and Prevention, “Contraception was declared by the C.D.C. to be one of the 10 greatest public health achievements of the 20th century.”

I can’t understand why the simple solution of letting beneficiaries decide on their coverage themselves isn’t floated. But what do I know?

Officials at the Justice Department and the Health and Human Services Department declined to comment, saying the cases were pending.

A compromise for religious institutions may be worked out. The government hopes that by placing the burden on insurance companies rather than on the organizations, the objections will be overcome. Even more challenging cases involve private companies run by people who reject all or many forms of contraception.

Skipping ahead, the writer notices something we noticed a long time ago. That the HHS Mandate strikes at the heart of freedom. Well, not in those words, exactly.

These cases pit the First Amendment and a religious liberty law against the central domestic policy of the Obama administration, likely affecting many tens of thousands of employees. The First Amendment says that “Congress shall make no law respecting an establishment of religion, or prohibiting the free exercise thereof,” and much attention has been focused in the past two decades on the issue of “free exercise,” meaning preventing governmental interference with religious practices.

Free-exercise cases in recent years have been about the practices of small groups — the use of a hallucinogen by a religious group, for example — rather than something as central as the Affordable Care Act.

The cases also test the contours of a 1993 law known as the Religious Freedom Restoration Act. The law prohibits the federal government from imposing a “substantial burden” on any religious practice without a “compelling state interest.” The burden must also be the least restrictive possible.

Professor Laycock of the University of Virginia said: “The burden is clear especially for religious organizations, which ought to be able to run themselves in accordance with their religious teachings. They are being asked to pay for medications they view as evil.” He added that because the health care law had many exceptions, including for very small companies, the government might find it hard to convince the courts that contraception coverage is, in fact, a compelling interest.

But William Marshall, a First Amendment scholar at the University of North Carolina Law School, said the Supreme Court asserted in a 1990 opinion by Justice Antonin Scalia that religious groups had a big burden in overcoming “a valid and neutral law of general applicability.”

“You could have an objection of conscience to anything the government wants you to do — pay taxes because they will go to war or to capital punishment, or having your picture on your driver’s license,” Mr. Marshall said. “The court has made clear that religious groups have no broad right for such exceptions.”

Mr. Laycock said that while judges are supposed to be neutral, they too can get caught up in the culture wars. Judges sympathetic to women’s sexual autonomy would probably come down on one side of the dispute, and those more concerned with religious liberty on the other, he said.

“There is a lot of political freight on this issue,” he said.

That may be the understatement of the year. Read the whole piece.

January 27, 2013
Searching for Truth: Arrogant? Or Audacious?
Next Post

January 28, 2013 For this Hymn by St. Thomas Aquinas (Zion, To Thy Savior Singing)
Recent Comments
0 | Leave a Comment
Browse Our Archives
Follow Us!