Italian Cardinal: Cardinal Mahony Could Be Asked to Skip Conclave 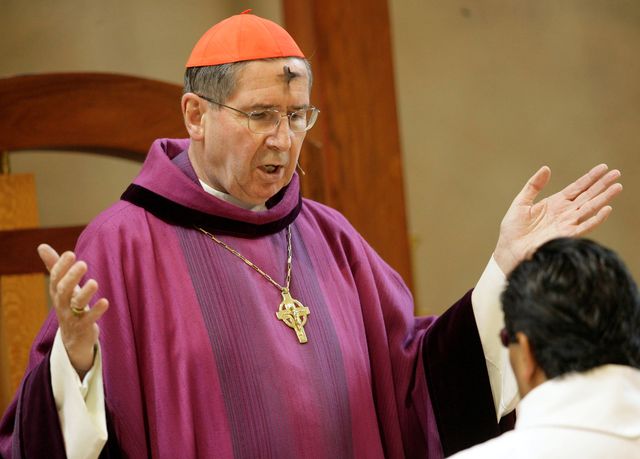 The Cardinal Mahony story just got bigger than the Archdiocese of Los Angeles. Here’s what the Washington Post shared earlier today,

VATICAN CITY — The controversy over Cardinal Roger Mahony’s vote in the conclave that will elect a new pope has now reached the Vatican, with at least one cardinal musing aloud that the former archbishop of Los Angeles should consider staying home.

Mahony, who led the nation’s largest archdiocese from 1985 to 2011, has been accused of hiding sexual abuse by priests and was recently sidelined by current Archbishop Jose Gomez.

Gomez announced that Mahony would no longer have any “administrative or public duties” after a court-ordered release of 14,000 pages of internal church records showed Mahony and others actively tried to shield abusive priests from prosecution. Gomez called the records “brutal and painful reading.”

Nonetheless, the 76-year old cardinal remains a bishop “in good standing” and retains the right to vote for the future pope until he reaches age 80. Gomez has since said he supports Mahony’s vote in the conclave.

On Monday, Italy’s main weekly, the Catholic magazine Famiglia Cristiana, put the so-called “Mahony affair” on the home page of its website, quoting the petition by left-leaning group Catholic United calling on the prelate to “stay home.”

The magazine also asked its readers to share their thoughts on whether Mahony should attend the conclave. Within hours, the magazine received hundreds of answers via its website, overwhelmingly asking the cardinal not to come to Rome.

“Cardinal Mahony should not only stay home from the conclave but retire to a life of prayer in a monastery,” read one typical comment. “It seems inconceivable to me that he doesn’t feel the moral duty to abstain from the conclave,” read another.

By Tuesday, Mahony’s case was on the front page of most of the main Italian newspapers, prompting the first reactions from within the Vatican.

In an interview with the daily La Repubblica, Cardinal Velasio De Paolis, the former head of the Vatican’s Prefecture for Economic Affairs and the pope’s envoy charged with reforming the disgraced Legionaries of Christ, said that “it will be up to (Mahony’s) conscience to decide whether to take part or not.”

De Paolis stressed that there is no formal procedure to stop Mahony from attending the conclave.

“The common practice is to use persuasion. There is no more that can be done. Cardinal Mahony has the right and duty to take part,” he said. “This is a troubling situation but the rules must be followed.”

According to De Paolis, only “someone with great authority” could advise “through a private intervention” that the retired Mahony not take part.

On Tuesday, the Italian news agency ANSA quoted Bishop Gianfranco Girotti, a former No. 3 official at the Congregation for the Doctrine of the Faith under then-Cardinal Joseph Ratzinger, as saying that “if his presence creates difficulties or embarrassment, then I think it could be opportune to renounce.”

“But the decision is up to him and his conscience,” Girotti added.

More media outlets are picking up on this story. Meanwhile, Rebecca Hamilton asks the question of the hour: Should Cardinal Mahony Stay Away From the Conclave?

In the final analysis, if he had been either a good man or a good Christian, that would have been enough. If he had just been following Jesus, he would never have enabled priests he knew were abusing children to keep on abusing more children. His conscience would not have allowed him to do it.

I am not saying that he doesn’t have many good qualities. I don’t know him, but people are almost always mixtures of good and bad. It’s hard for a man who has spent so many years basking in flattery and cozened by yes men to suddenly find himself “all alone to weep his outcast fate” as Shakespeare put it. It is hard for anyone, but especially so for someone who has been pandered to and pampered for decades to come face to face with the fact that the only lies he has left are the lies he tells himself because everyone else knows the humiliating truth of his dirtiest sins.

I believe Cardinal Mahony is at that place. The blog posts he keeps publishing sound like deep denial with an overcoating of bitterness. They do not sound like remorse or repentance. It seems that he simply will not accept that nothing he says can change what he’s done and that no good he ever did can undo or wash away the harm he’s inflicted.

February 19, 2013
Voting Has Opened in the 2013 About Catholicism Readers' Choice Awards
Next Post

February 20, 2013 Making the Connection Between the Pill and Water Pollution
Recent Comments
0 | Leave a Comment
"Vaya con Dios, Leonard; Rest in Peace."
AnonCollie Leonard Nimoy Explains The Origin Of ..."
"Thank you for sharing"
Andy To Break My Fast from Being ..."
"I've seen Matt Maher live four times...twice since this song was released. I absolutely love ..."
Veritas81 WYD Flashback With Matt Maher, And ..."
"Yes, and Dolan should have corrected the scandalous and wrong decison of his predecessor when ..."
sixbunnies Archdiocese of New York Health Plan ..."
Browse Our Archives
get the latest from
Catholic
Sign up for our newsletter
POPULAR AT PATHEOS Catholic
1