Your Blogger is on the Wrong Side of Public Opinion, Just Like G.K. Chesterton February 21, 2013 Frank Weathers 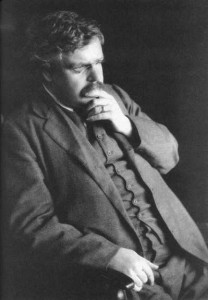 Just an F.Y.I. Good news, though. The Church is on the right side of history. She always has been, and always will be. Of course, that is because the Church is like Noah’s Ark, and therefore constructed to ensure our salvation.

Salvation history, then, is what She is all about. Saving folks from their sins is why Christ came into the world, and it’s why He said the things he said, which consequently were so unpopular that they led to his execution.

To be saved, see, is why I signed up to be a member of His ship’s company. By doing so, I knew that this would be unpopular, as being against error is what Christians must be, even when we ourselves are error-prone. And since Christ handed the Keys to St. Peter, fighting error, while throwing the lifeline to many, is what the Church is all about.

It’s what G.K. Chesterton was all about too. I’ve been reading his biography of St. Thomas Aquinas as Lenten reading, and as penitential activities go it has been too enjoyable to call it a penance. As cartographer of the mind of St. Thomas, I would argue that Chesterton cannot be equaled. His map makes the mind of the genius understandable.

The genius saint himself is entirely accessible, too, as my reading of his commentaries on scriptures, and his Lenten homilies have shown to be the case. Not sure you’re ready to dive in to Thomism? No problem. Read St. Thomas’ theological stuff instead. You can find it up yonder in the Cool Links page on the toolbar beneath the banner.

Back to the title of this post. The above was a long winded introduction to a post I saw on Crisis, written by Dale Alquist of The American Chesterton Society. The piece is about something that isn’t gay, and that isn’t marriage, though it does seem quite popular in an Extraordinary Popular Delusions and the Madness of Crowds sort of way.

The title of the piece is, if not subtle, not duplicitous either. Have a look.

G. K. Chesterton: It’s Not Gay, and It’s Not Marriage

One of the pressing issues of Chesterton’s time was “birth control.” He not only objected to the idea, he objected to the very term because it meant the opposite of what it said. It meant no birth and no control. I can only imagine he would have the same objections about “gay marriage.” The idea is wrong, but so is the name. It is not gay and it is not marriage.

Chesterton was so consistently right in his pronouncements and prophecies because he understood that anything that attacked the family was bad for society. That is why he spoke out against eugenics and contraception, against divorce and “free love” (another term he disliked because of its dishonesty), but also against wage slavery and compulsory state-sponsored education and mothers hiring other people to do what mothers were designed to do themselves. It is safe to say that Chesterton stood up against every trend and fad that plagues us today because every one of those trends and fads undermines the family. Big Government tries to replace the family’s authority, and Big Business tries to replace the family’s autonomy. There is a constant commercial and cultural pressure on father, mother, and child. They are minimized and marginalized and, yes, mocked. But as Chesterton says, “This triangle of truisms, of father, mother and child, cannot be destroyed; it can only destroy those civilizations which disregard it.”

This latest attack on the family is neither the latest nor the worst. But it has a shock value to it, in spite of the process of de-sensitization that the information and entertainment industries have been putting us through the past several years. Those who have tried to speak out against the normalization of the abnormal have been met with “either slanging or silence,” as Chesterton was when he attempted to argue against the faddish philosophies that were promoted by the major newspapers in his day. In 1926, he warned, “The next great heresy will be an attack on morality, especially sexual morality.” His warning has gone unheeded, and sexual morality has decayed progressively. But let us remember that it began with birth control, which is an attempt to create sex for sex’s sake, changing the act of love into an act of selfishness. The promotion and acceptance of lifeless, barren, selfish sex has logically progressed to homosexuality.

You’ll want to read the whole piece, as it is sweeping, while being pleasantly brief. Barren sex for the sake of pleasure, Oscar Wildes’ fall (and redemption), and thoughts about “highly civilized” sins are discussed with clarity, and charity. Alquist ends his piece with words that sting us all in their prophetic truth: we Christians have made a mockery of marriage.

Marriage is between a man and a woman. That is the order. And the Catholic Church teaches that it is a sacramental order, with divine implications. The world has made a mockery of marriage that has now culminated with homosexual unions. But it was heterosexual men and women who paved the way to this decay. Divorce, which is an abnormal thing, is now treated as normal. Contraception, another abnormal thing, is now treated as normal. Abortion is still not normal, but it is legal. Making homosexual “marriage” legal will not make it normal, but it will add to the confusion of the times. And it will add to the downward spiral of our civilization. But Chesterton’s prophecy remains: We will not be able to destroy the family. We will merely destroy ourselves by disregarding the family.

This reminds me of that time I was on the wrong side of Stephen Colbert. You know, because Jesus said plenty about marriage, and other inconvenient stuff too. That is what lifesavers do.

February 21, 2013 German Bishops: Emergency Contraception in Case of Rape is Licit if the Pill Doesn't Induce Abortion UPDATED
Recent Comments
0 | Leave a Comment
Browse Our Archives
get the latest from
Catholic
Sign up for our newsletter
POPULAR AT PATHEOS Catholic
1

The Woes of “Matthew”—Jesus Wasn’t Nice!
Messy Inspirations
Related posts from Why I Am Catholic