For Your Lenten Friday Night at the Movies III, Three Colors: Blue

As we roll into the third Friday of Lent, I’m in the mood for another film I missed that comes highly acclaimed. Some folks have listed it as one of the best Catholic movies that have ever been made.

If you believe that is a lofty claim, and I confess that I might wonder about this too, Rotten Tomatoes ranks this film at the 100% mark. Wikipedia summarizes tonights’ feature like so,

Three Colors: Blue is a 1993 French drama film written, produced, and directed by the acclaimed Polish director Krzysztof Kieślowski. Blue is the first of three films that comprise The Three Colors Trilogy, themed on the French Revolutionary ideals of liberty, equality, and fraternity; it is followed by White and Red. According to Kieślowski, the subject of the film is liberty, specifically emotional liberty, rather than its social or political meaning. Set in Paris, the film is about a woman whose husband and child are killed in a car accident. Suddenly set free from her familial bonds, she attempts to cut herself off from everything and live in isolation from her former ties, but finds that she cannot free herself from human connections.

Sounds interesting to me. Mysterious and complex. The folks over at the Criterion Collection give us three more reasons to watch this film. 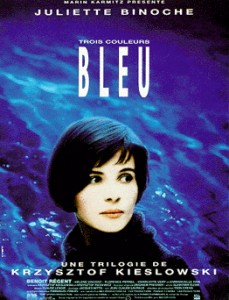 First up is a dinner of baked, parmesan cheese encrusted, talapia, with pancit with shrimp (a Filipino favorite) and mashed potatoes on the side. Unlike some of you, I did not give up beer for lent, so I’ll be washing dinner down with a freshly poured one of these.

Then we’ll break out the popcorn and cue up the DVD. Public libraries with free DVD rentals are cool!

March 2, 2013 The MSM Catechism: Honor Thy Orgasm, And All The Kingdoms of the Earth Will Be Yours UPDATED
Recent Comments
0 | Leave a Comment
"Vaya con Dios, Leonard; Rest in Peace."
AnonCollie Leonard Nimoy Explains The Origin Of ..."
"Thank you for sharing"
Andy To Break My Fast from Being ..."
"I've seen Matt Maher live four times...twice since this song was released. I absolutely love ..."
Veritas81 WYD Flashback With Matt Maher, And ..."
"Yes, and Dolan should have corrected the scandalous and wrong decison of his predecessor when ..."
sixbunnies Archdiocese of New York Health Plan ..."
Browse Our Archives
get the latest from
Catholic
Sign up for our newsletter
POPULAR AT PATHEOS Catholic
1