The segment is scheduled for 11:00 AM Eastern time. You can view the discussion at the HuffPost Live website.

Who is Pia de Solenni? Well she’s another of the many Catholic women who buck the dominant narrative that the Church’s teachings on sexuality, artificial birth control, and marriage, are just keeping us all down. Here’s a snippet from her bio, 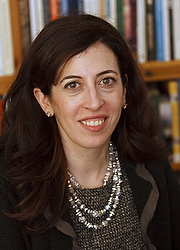 Dr. Pia de Solenni is an ethicist and cultural analyst. She owns her own consulting company, Diotima Consulting. She is an expert in issues relating to women’s health, life issues, the new feminism, Catholicism, and culture. Her work has appeared in various publications including The Wall Street Journal Europe, The Washington Post, National Catholic Reporter, Our Sunday Visitor, and National Review Online.

Dr. de Solenni has participated in many radio and television talk shows on various topics. She has appeared on MSNBC, “Hardball with Chris Matthews”, “The O’Reilly Factor”, CNN, ABCNews, among others. Dr. de Solenni has been quoted in newspapers nationwide, including The New York Times, The Washington Times, and The Associated Press.

She can handle whatever the HuffPost hosts throw at her. Check out this little clip of her talking about human sexuality, contraception, and St. Thomas Aquinas, all in the same sentence. 🙂

It should be an interesting discussion. Tune in at 11:00.

March 7, 2013 Foreign Made Ball Bearings Defunded, But the HHS Mandate is Paid For
Recent Comments
0 | Leave a Comment
"Vaya con Dios, Leonard; Rest in Peace."
AnonCollie Leonard Nimoy Explains The Origin Of ..."
"Thank you for sharing"
Andy To Break My Fast from Being ..."
"I've seen Matt Maher live four times...twice since this song was released. I absolutely love ..."
Veritas81 WYD Flashback With Matt Maher, And ..."
"Yes, and Dolan should have corrected the scandalous and wrong decison of his predecessor when ..."
sixbunnies Archdiocese of New York Health Plan ..."
Browse Our Archives
get the latest from
Catholic
Sign up for our newsletter
POPULAR AT PATHEOS Catholic
1