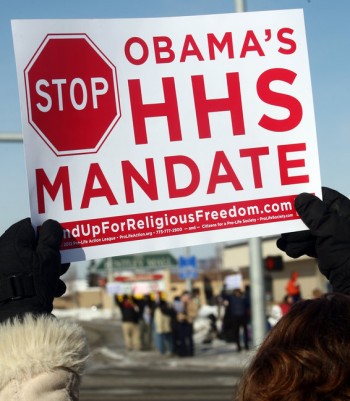 Yesterday I shared a little update on what has been cooking on the HHS Mandate front, while we’ve been caught up in the Papal resignation, conclave, and installation. Thankfully, the good folks in the legal department of the United States Conference of Catholic Bishops kept their eyes, and minds, glued to the chess board.

Yesterday, they published a press release with a link to the public comment the Conference made to the latest iteration of the HHS Mandate “accommodation.” In a nutshell? No joy.

WASHINGTON— The general counsel of the U.S. Conference of Catholic Bishops states that the current proposed revisions of the Obama Administration’s contraceptive mandate are “an unprecedented …violation of religious liberty by the federal government” and must be changed.

The statement is in comments filed March 20 regarding the mandate, which requires most health plans in the United States to cover abortion-inducing drugs, contraceptives, sterilization procedures, and related education and counseling.

First, like earlier iterations of the regulation, the latest proposal requires coverage of items and procedures that, unlike other mandated “preventive services,” do not prevent disease. Instead, they are associated with an increased risk of adverse health outcomes, including conditions that other “preventive services” are designed to prevent.

Second, no exemption or accommodation is available at all for the vast majority of individual or institutional stakeholders with religious or moral objections to contraceptive coverage. Virtually all Americans who enroll in a health plan will ultimately be required to have contraceptive coverage for themselves and their dependents, whether they want it or not.

Third, although the definition of an exempt “religious employer” has been revised to eliminate some of the intrusive and constitutionally improper government inquiries into religious teaching and beliefs that were inherent in an earlier definition, the current proposal continues to define “religious employer” in a way that, by the government’s own admission, excludes (and therefore subjects to the mandate) a wide array of employers that are undeniably religious. Generally the nonprofit religious organizations that fall on the “non-exempt” side of this religious gerrymander include those organizations that contribute most visibly to the common good through the provision of health, educational, and social services.

Fifth, the mandate continues to represent an unprecedented (and now sustained) violation of religious liberty by the federal government. As applied to individuals and organizations with a religious objection to contraceptive coverage, the mandate violates the First Amendment, the Religious Freedom Restoration Act, and the Administrative Procedure Act.

If President Obama thought that the Bishops weren’t following his orders before the Conclave, they aren’t leaving any doubts about that fact now. Your move, Mr. President.

The Deadline to submit your own comment is April 8, 2013. Click here to let the folks at HHS know that you stand with the U.S. Bishops.

March 22, 2013 You Never Know When the Pope Will Show Up and Say Mass...UPDATED
Recent Comments
0 | Leave a Comment
Browse Our Archives
Follow Us!