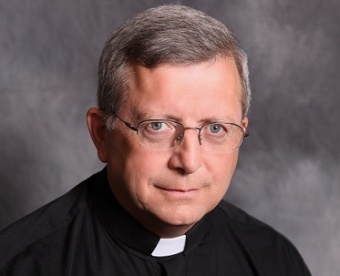 Catholic News Service has the scoop,

Jefferson City, Mo., Aug 12, 2013 / 02:12 pm (CNA).- The mysterious Missouri priest who gave anointing to a woman in her wrecked car near Center, Mo. has been identified as Father Patrick Dowling, of the Diocese of Jefferson City.

“I thank God and the amazingly competent rescue workers,” Fr. Dowling stated today in a comment on CNA’s original article on the Aug. 4 incident.

“I thank them for making me welcome in such a highly charged situation and allowing me to minister as a priest.”

Katie Lentz was trapped in her older-model Mercedes, which had been struck by another vehicle which passed into her lane. That car’s driver has been charged with DWI.

Rescue workers spent an hour trying to get Lentz out of her car, but the solid materials of its construction were dulling the fire department’s emergency equipment.

Though the highway was blocked off, “I did not leave with the other cars,” Fr. Dowling commented. He parked as close as he could, “and walked the remaining 150 yards. I asked the Sheriff if a priest might be needed … on checking, he permitted me to approach.”

“When the young lady asked that I pray her leg stop hurting, I did so. She asked me to pray aloud and I did briefly … the rescue workers needed space, and would not have appreciated distraction. I stepped to one side and said my rosary silently until the lady was taken from the car.”

Once Lentz was removed from her vehicle, he explained, “I then shook hands with the Sheriff, and thanked him, as I left. I have to admire the calmness of everybody involved.”

Grace filled moments in the middle of mayhem are like the balm of Gilead for the afflicted. You really can’t put a price on the comfort and solace that priests and clergy bring to the table. Remember when the Boston bombings occurred and clergy were banned from responding? Thankfully the Sheriff in Ralls County, MO saw things differently.

Guess what else? It’s still a miracle that Fr. Dowling happened by.

August 11, 2013
Because You Never Know When Pope Francis Might Pick Up The Phone, And Give You A Call
Next Post

August 13, 2013 Remember the Parable of the Barren Fig Tree? True Story.
Recent Comments
3 Comments | Leave a Comment
Browse Our Archives
get the latest from
Catholic
Sign up for our newsletter
POPULAR AT PATHEOS Catholic
1