Women Rally In Front Of The White House To Protest HHS Mandate, Media Ignores The Story 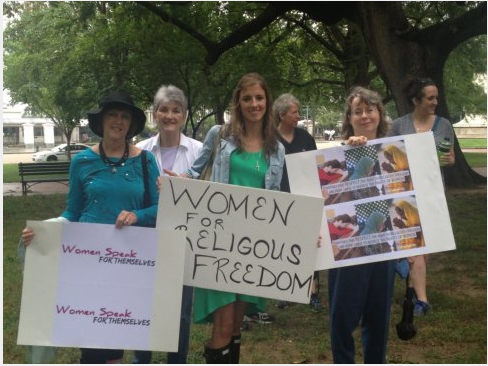 It happened yesterday. From what I gather, no one was arrested or anything. Unfortunately, no one from the mainstream media outlets covered the story either. Sandra Fluke wasn’t there, so it wasn’t newsworthy. Figures.

If a tree falls in the woods and nobody hears it, does it make a noise?

On the positive side, the Washington Post did give Helen Alvaré, and Meg T. McDonnell of Women Speak For Themselves some room in the On Faith section yesterday morning to give Five Reasons Why Women Care About HHS’ Contraception Mandate. Here is a snip,

Today, when the Department of Health and Human Services’ “contraception mandate” was scheduled to begin, members of Women Speak For Themselves (WSFT)—a grassroots women’s religious freedom group—are demonstrating in Lafayette Park across from the White House. Though HHS postponed implementation of the mandate for religious non-profits to January 1, 2014, the women of WSFT don’t want anyone to believe that the cause of religious freedom is forgotten. And they don’t want anyone buying the phony message the government is selling (in the words of one of our members, Rachel): that “women care more about free birth control than freedom of religion.”

The 40,000 women of WSFT have many reasons for opposing the mandate. Here are their top five:

1. Women really care about religious freedom. In the words of pollster George Gallup, Jr.: “A mountain of Gallup survey data attests to the idea that women are more religious than men, hold their beliefs more firmly, practice their faith more consistently, and work more vigorously for the congregation.” (George H. Gallup Jr., Why Are Women More Religious, December 17, 2002.) Furthermore, religion provides a rock solid foundation for women’s radical equality with men. There’s nothing like Genesis’ assurance that women were created to “image God” equally with men, or the New Testament’s account of women’s role in salvation history. Politicians and corporate America pay us intermittent attention when pressured. But the religious case for women’s equality never flags.

2. Women have founded, and run or work for, many of the religious institutions the mandate threatens. Many of the religious institutions the mandate threatens were founded by religious women in order to pay attention to the people the mainstream ignored: females, slaves, immigrants, the poor. Many of the women in our organization have worked for such religious institutions and are loathe to see their lights dimmed, or even put out. There is a special delight in working for a religious hospital or school or social service. It comes in part from understanding that, at the end of the day, we are united on matters of faith, even if we disagree about this or that smaller thing. This is no place for the federal government’s heavy hand. It’s no place for its letters sent home to us and our minor daughters, or for mandatory speeches from the mouths of our insurance providers—assuring us annually that the religious employers we chose to serve don’t know what’s good for us; D.C. bureaucrats do.

3. Approving of birth control doesn’t mean you want the government pushing it.

Read more reasons here. There is also some coverage of the event over at the Weekly Standard. Want updates? Follow the Women Speak For Themselves Facebook page.

August 2, 2013
What Millennials Really Want From The Church
Next Post

August 2, 2013 Which Pope Said What? Take The New York Times Challenge
Recent Comments
1 Comment | Leave a Comment
"Vaya con Dios, Leonard; Rest in Peace."
AnonCollie Leonard Nimoy Explains The Origin Of ..."
"Thank you for sharing"
Andy To Break My Fast from Being ..."
"I've seen Matt Maher live four times...twice since this song was released. I absolutely love ..."
Veritas81 WYD Flashback With Matt Maher, And ..."
"Yes, and Dolan should have corrected the scandalous and wrong decison of his predecessor when ..."
sixbunnies Archdiocese of New York Health Plan ..."
Browse Our Archives
get the latest from
Catholic
Sign up for our newsletter
POPULAR AT PATHEOS Catholic
1