Trappist Nuns in Syria to President Obama: Send Us Your Prayers, Not Your Missiles UPDATED

Trappist Nuns in Syria to President Obama: Send Us Your Prayers, Not Your Missiles UPDATED September 1, 2013 Frank Weathers 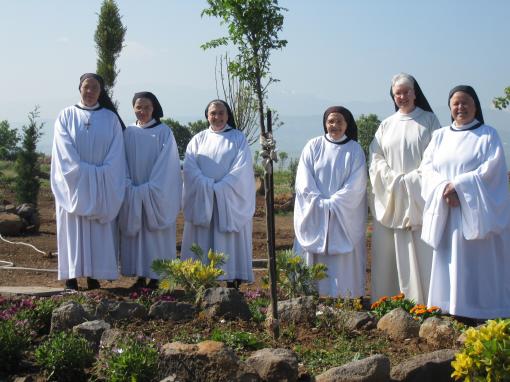 We heard from Pope Francis earlier today, but how about testimony from folks who are a little closer to the action? Catholic World Report has a letter from Cistercian nuns who moved their monastery to Azeir, in Northern Syria, back in 2005. Here’s a snippet from an open letter they wrote to the world a few days ago.

We look at the people around us, our day workers who are all here as if suspended, stunned: “They’ve decided to attack us.” Today we went to Tartous…we felt the anger, the helplessness, the inability to formulate a sense to all this: the people trying their best to work and to live normally. You see the farmers watering their land, parents buying notebooks for the schools that are about to begin, unknowing children asking for a toy or an ice cream…you see the poor, so many of them, trying to scrape together a few coins. The streets are full of the “inner” refugees of Syria, who have come from all over to the only area left that is still relatively liveable…. You see the beauty of these hills, the smile on people’s faces, the good-natured gaze of a boy who is about to join the army and gives us the two or three peanuts he has in his pocket as a token of “togetherness”…. And then you remember that they have decided to bomb us tomorrow. … Just like that. Because “it’s time to do something,” as it is worded in the statements of the important men, who will be sipping their tea tomorrow as they watch TV to see how effective their humanitarian intervention will be….

Will they make us breathe the toxic gases of the depots they hit, tomorrow, so as to punish us for the gases we have already breathed in?

The people are straining their eyes and ears in front of the television: all they’re waiting for is a word from Obama!

A word from Obama? Will the Nobel Peace Prize winner drop his sentence of war onto us? Despite all justice, all common sense, all mercy, all humility, all wisdom?

The Pope has spoken up, patriarchs and bishops have spoken up, numberless witnesses have spoken up, analysts and people of experience have spoken up, even the opponents of the regime have spoken up…. Yet here we all are, waiting for just one word from the great Obama? And if it weren’t him, it would be someone else. It isn’t he who is “the great one,” it is the Evil One who these days is really acting up.

The problem is that it has become too easy to pass lies off as noble gestures, to pass ruthless self-interest off as a search for justice, to pass the need to appear [strong] and to wield power off as a “moral responsibility not to look away…”

And despite all our globalizations and sources of information, it seems nothing can be verified. It seems that there is no such thing as a minimal scrap of truth … That is, they don’t want there to be any truth; while actually a truth does exist, and anyone honest would be able to find it, if they truly sought it out together, if they weren’t prevented by those who are in the service of other interests.

Read and share the entire letter. Pray for them now, and again on September 7. And send this letter of theirs to your representatives in Congress, in the interest of justice, common sense, mercy, humility, and wisdom.

Here’s an earworm to bring it into sharp relief: It’s a Mistake.

September 1, 2013
Pope Francis Calls the Faithful to Pray and Fast for Peace in Syria, the Middle East, and the World
Next Post

September 3, 2013 In Case You Wondered About My Thoughts On Action Against Syria...
Recent Comments
8 Comments | Leave a Comment
"Vaya con Dios, Leonard; Rest in Peace."
AnonCollie Leonard Nimoy Explains The Origin Of ..."
"Thank you for sharing"
Andy To Break My Fast from Being ..."
"I've seen Matt Maher live four times...twice since this song was released. I absolutely love ..."
Veritas81 WYD Flashback With Matt Maher, And ..."
"Yes, and Dolan should have corrected the scandalous and wrong decison of his predecessor when ..."
sixbunnies Archdiocese of New York Health Plan ..."
Browse Our Archives
get the latest from
Catholic
Sign up for our newsletter
POPULAR AT PATHEOS Catholic
1