Archbishop Kurtz: “We know that the Constitution and the law protect us from heavy-handed government demands that we violate our consciences…” 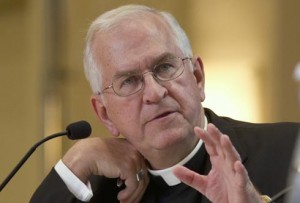 Though the present Administration doesn’t see things this way. This thought was from an editorial posted by the Religion News Service written by Archbishop Joseph Kurtz,  President of the USCCB.

The title?  Why We’re Resisting The Contraception Mandate. Here are the concluding thoughts from his piece,

We have spent significant time and effort seeking sincere dialogue with the Obama administration in hopes of preventing this impasse, and we are long-standing advocates of accessible, life-affirming health care. Yet our concerns continue to go unheard. The administration has crafted an “accommodation” that continues to compel our ministries to participate in providing drugs and services that violate our deeply held religious beliefs.

With the implementation date now upon us, we have made one more effort at dialogue, again asking President Obama to exempt nonprofit institutions caring for those in need from the harsh penalties imposed by the mandate.

The administration has shown flexibility in implementing other provisions of the Affordable Care Act, issuing numerous delays and exemptions for many employers and individuals.

We’re only asking that it offer that same consideration to those who want to live by their religious beliefs without facing government penalties for doing so. We continue to ask Congress to provide relief as well, and we look to the Senate to work with the House in that effort.

We know that the Constitution and the law protect us from heavy-handed government demands that we violate our consciences or pay crippling fines.

On behalf of those served by our schools, hospitals and social service ministries, we will continue to resist the burdens imposed by the HHS mandate.

We hope and pray that the administration and Congress will protect us from those burdens, and that the courts will uphold our freedom to serve those who depend on us.

Back when the HHS Mandate crisis began, many were amazed that the bishops were united in their stance against it. Guess what? They still are. And last time I checked, we still hold that the United States is a government of laws, and not of men. As such, attempts by the Administration to foist bad law upon us must be fought.

Why Pro-Lifers Should Vote Blue: Intro
Mudblood Catholic
Related posts from Why I Am Catholic