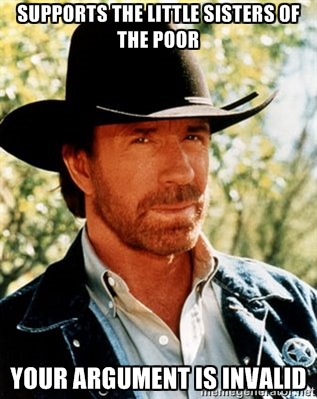 Seriously? I mean you just knew that Chuck Norris was not going to be the bad guy in this post. Right?

Because not only does U.S. News & World Report, not support The Little Sisters of the Poor ( as they stand up to Leviathan), but they gave Jamie Stiehm a platform to spew all sorts of anti-Catholic bigotry regarding Justice Sotomayor’s decision to put the government on time-out.

Et tu, Justice Sonia Sotomayor? Really, we can’t trust you on women’s health and human rights? The lady from the

Bronx just dropped the ball on American women and girls as surely as she did the sparkling ball at midnight on New Year’s Eve in Times Square. Or maybe she’s just a good Catholic girl.

The Supreme Court is now best understood as the Extreme Court. One big reason why is that six out of nine Justices are Catholic. Let’s be forthright about that. (The other three are Jewish.) Sotomayor, appointed by President Obama, is a Catholic who put her religion ahead of her jurisprudence. What a surprise, but that is no small thing…

Head over to Deacon Greg’s place for the full lowdown on great moments in journalism: the shocking bigotry of U.S. News & World Report. Because Catholics are tunneling under your house!

Chuck Norris, meanwhile? Did you know that when he writes, his fingers never even hit the keyboard? Thoughts from his brain go straight to the screen. That’s how this post on the Little Sisters was written. And the title? From his mystical fingertips to the minions at the IRS’s audit list: Obama Bullying Nuns (Part 1). Check it out,

Obama knows that if his pro-abortion agenda is to win the war on the womb, his administration must also oppose anti-abortion advocates, and chief among those warriors is the Roman Catholic Church. You know the White House isn’t dumb enough to confront papal power overtly — yet that doesn’t stop it from chipping away at the anti-abortion wall by putting nuns and Catholic contraception views and values in its cross hairs.

On New Year’s Eve, just one day before Obamacare’s mandate forced nonprofit companies and religion-affiliated institutions across the country to provide contraception and drugs that possibly induce abortions in their employee health care plans, Supreme Court Justice Sonia Sotomayor blocked the requirement for a care facility for the elderly, run by Catholic nuns who appealed to the high court for help.

As NPR explained, “churches and other houses of worship are exempt from the birth control requirement, but affiliated institutions that serve the general public are not. That includes charitable organizations, universities and hospitals.” 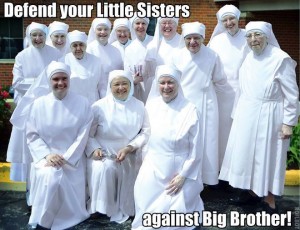 In response to the nuns’ appeal, the Department of Justice placed the Little Sisters of the Poor in an ethical dilemma in which group members must violate their faith or pay fines. The DOJ argued in legal papers filed last Friday that the nuns don’t have a leg to stand on. The Obama administration tried to explain that they don’t have to offer contraception and abortion-inducing drugs, as long as they sign a government form that delegates the action to a third party. Without signing that “self-certification” form, the nuns would incur steep government fines.

But Mark Rienzi, who is senior counsel for The Becket Fund for Religious Liberty, responded on behalf of the nuns to the DOJ’s argument by retorting that government officials “are simply blind to the religious exercise at issue: the Little Sisters and other Applicants cannot execute the form because they cannot deputize a third party to sin on their behalf.”

And where is President Obama — the so-called constitutional lawyer living in our White House — during the whole debate? Coming out to protect the Bill of Rights for the nuns as he has for a number of progressive minorities? No. He’s hiding behind the curtains in the Oval Office, manipulating his minions to follow his pro-abortion biddings.

It is not known when Justice Sotomayor will rule on these ludicrous government actions and violations of the nuns’ personal religious liberty and practice. But one thing we do know is that the Founding Fathers are rolling in their graves right now regarding the government’s obliteration of our First Amendment religious rights: “Congress shall make no law respecting an establishment of religion, or prohibiting the free exercise thereof.”

What an utter constitutional and leadership travesty it is that Obamacare’s promoter in chief repeatedly is breaking this promise: “Under our (health care reform) plan, no federal dollars will be used to fund abortions.”

Seeing as our president won’t honor life in the womb, please write or call your representatives to let them know where you stand. Read and hand out my friend Randy Alcorn’s book “Why Pro-Life?” (http://www.epm.org). And then ensure your local community of faith is honoring Sanctity of Human Life Sunday on Jan. 20. The day commemorates the Jan. 22, 1973, Roe v. Wade U.S. Supreme Court decision, which legalized abortion in our country. Since then, more than 55 million abortions have taken place in the U.S.

No bigotry in there, and he’s already promising a sequel. Win!

Nationally Syndicated Columnist: “Those @#$% Catholics Even Worse Than The @#$% Jews!”

The Anchoress: Fisking Stiehm’s Bigotry at US News

January 7, 2014
Archbishop Kurtz: "We know that the Constitution and the law protect us from heavy-handed government demands that we violate our consciences..."
Next Post

January 9, 2014 Dodging The Bigotry Bullet, U.S. News and World Report Hosts Sister Mary Ann Walsh
Browse Our Archives
get the latest from
Catholic
Sign up for our newsletter
POPULAR AT PATHEOS Catholic
1

Pope Francis Talks of Gospel Freedom;...
Biblical Evidence for Catholicism
Related posts from Why I Am Catholic