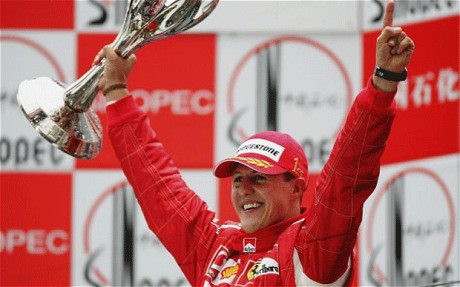 Back in January I asked folks to pray for the 7 time Formula One champion’s recovery from a skiing accident. Schumacher was put in an induced coma in order to stabilize him after the accident. When his doctors tried to ween him off the ventilators, Michael did not wake up. That he has come out of the coma now is a huge step forward in his recovery.

But he is still in the hospital, albeit a rehab facility in Switzerland, and he has a long way to go on the road to recovery. Some of the stories coming out paint a pretty grim picture for his future. For example,

…the move from Grenoble hospital to Switzerland was a “big step mentally” for his family.

“The transfer doesn’t mean that his condition improved markedly in the last few weeks. But he no longer needed to be in intensive care and a programme of rehabilitation is now under way,” a source close to the family said.

“He certainly can’t talk but there is some degree of communication.

“His doctors and family speak to him but he gets tired very quickly and needs a lot of rest. So this is kept to a minimum.”

Michael Schumacher “will remain an invalid for the rest of his life”, said leading medical expert Erich Riederer.

The F1 racing driver emerged from his coma on 16 June, yet numerous top medical practitioners have said since that his prognosis might not be as significant as some may have thought.

“He will remain an invalid all his life and will always remain dependent on others’ help,” said neurology specialist Riederer.

He added that Schumacher will have “permanent” damage and that it will be a ”success“ if he manages to sit up unaided within the next three months and operate an electric wheelchair within six months.

However, he said that his coma awakening was still “positive”.

The neurologist said it would be a “success” if Schumacher managed to sit up unaided after three months and could operate an electric wheelchair within six months. He also speculated that the injured driver could be transferred again to a clinic for paraplegics in Nottwil near Lucerne.

His grim assessment mirrored the prognosis offered by the former Formula One physician, Dr Gary Hartstein who has claimed that Schumacher would never make any meaningful recovery from his head injuries.

During his 120 mile ambulance transfer on Monday from Grenoble to Lausanne, Schumacher was reported to have communicated by nodding. He was also said to have kept his eyes open for long stretches of the journey.

Sounds bloody awful, doesn’t it? So why is Joe Six-Pack turning cartwheels over this news? Because I was in similar shoes once. I too was in a medically induced coma, for eight strange, narcotic-induced, dream laden, comfortably numb, days. And guess what? When I woke up, I couldn’t talk.

You cannot possibly talk when you have had a tracheostomy done, and you were breathing with the aid of a machine. I too was nodding when communicating with family. Frustrating as hell, it was, because I couldn’t talk to them, and my hands were all bandaged, so writing with a crayon, let alone a pencil, was impossible. I couldn’t talk until I was given a valve device that fit over the hole at the base of my throat. The hole that I had been breathing through, see? It seemed like a week went by before I could talk in a weird, high pitched, squeaky voice.

But I eventually did.

I was under for eight days, and lost over 20 pounds, pounds that were not fat, if you catch my drift. Michael has been under for six months, being fed through a stomach tube (just like me) so he is skin and bones. Hell yes, it’s a monumental task to sit up in bed! The first time I tried to sit up, I was waxed within 5 minutes. And even though I could eventually talk, guess what? I didn’t make much sense, and I cursed like a sailor. And all the care givers talked to me like I was five years old, addled, and probably going to be like this for life.

My family was put through the wringer, let me tell you.

But I came out of it. Time, and a few more years of surgeries, and occupational therapy, physical therapy, etc., and I was right as rain. Well, lets just say that although I was not 100%, I sure was not an invalid for the rest of my life. Miracles happen, and I am a living testament to that fact.

Enough about me. I thank God for this news that Schumi has regained consciousness, has been transferred to a rehabilitation hospital, and has taken the first steps on what I hope, and pray, is a speedy road to recovery. It may seem glacial to the press, to the fans, and even to the doctors treating him, but if anyone can pull out of this, Michael Schumacher can.

Join me in prayers of thanksgiving, and for continued prayers for his complete recovery. May his family be comforted by his progress, and by the Lord, the giver of life. Amen.

June 23, 2014 Revenge Of The Disney Dads (Music for Mondays)
Browse Our Archives
get the latest from
Catholic
Sign up for our newsletter
POPULAR AT PATHEOS Catholic
1

Hearing God a Second Time
Have you ever worried that you missed what God had planned for...
view all Catholic blogs
Copyright 2008-2020, Patheos. All rights reserved.