The Truth About S. 2578 From A Career Politician, With An Assist From Malcolm Muggeridge and James Madison

The Truth About S. 2578 From A Career Politician, With An Assist From Malcolm Muggeridge and James Madison July 17, 2014 Frank Weathers 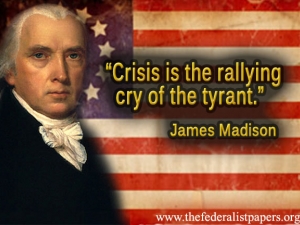 It didn’t fail. Rebecca Hamilton, my blog neighbor, and soon to be retired Democrat pol, explains it simply, and succinctly.

It did not “fail.” The vote was on cloture, not the bill. A vote on cloture is a vote on whether or not to stop a filibuster. In pragmatic terms, the failure of this vote allows opponents of the legislation to mount a filibuster if they so choose (everyone assumes they will so choose) which could and probably would keep the bill from coming to a vote.

Cloture requires 60 votes. Even though supporters of the bill fell short by 4 votes, they got a clear majority of the Senate to vote for cloture, which was, in essence a vote for the bill. Also, Majority Leader Reid set it up so that he could call another vote on cloture later.

The story is all over the internet that the bill “failed.” Not true.

I’ve been paying more attention to the prayers at Mass lately, and this past Sunday, as well as at Mass today, these words were prayed.

Give us the grace to reject all that is contrary to Christ.

A popularly elected government that tries to use power to intimidate, and suppress religious liberty, is one of those contrary things. In this short clip, Malcolm Muggeridge is a bit harsh, but right on the money with the need for checks on power.

These checks were built into our Constitution, much to the chagrin of many politicians we seem to have elected recently. Recall James Madison’s thoughts in Federalist Paper #51,

July 17, 2014
The Bishops Respond To The Fear Mongering Of The Administration Over Religious Liberty
Next Post

July 19, 2014 Praying For All Aboard Malaysia Flight 17, And Mourning Their Loss, In My Own, Feeble, Way
Browse Our Archives
get the latest from
Catholic
Sign up for our newsletter
POPULAR AT PATHEOS Catholic
1

Why I won't recommend Jordan Peterson to my...
As a teacher at (what used to be) an all boys Benedictine...
view all Catholic blogs
Copyright 2008-2020, Patheos. All rights reserved.