For Evelyn Waugh’s Prayer of a Convert

For Evelyn Waugh’s Prayer of a Convert December 27, 2014 Frank Weathers 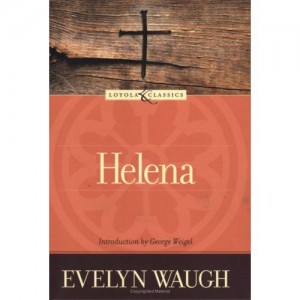 . I think it is fantastic and I enjoyed it immensely. Reading it makes we want to head with my family to the Holy Land on pilgrimage, bankrupting us in the process (oops, too late!). St. Helena, as the empress dowager, never faced that particular financial aspect of her own journey to Palestine.

Careful, because if you read this book you too may feel compelled to do the same.

As I was racing through the pages, I came upon a section that I call “the Prayer of the Convert.” It applies to those who were born into the Church as well. You know, the cradle Catholics who wandered away from their faith and have been called back to it.

Waugh was a convert like me, see, and so was St. Helena, who begs the intercession of the magi when she attends Mass on the eve of the Epiphany in the place where Our Lady gave birth to Our Lord,

Perhaps she apprehended that her fame, like theirs, would live in one historic act of devotion; that she too had emerged from a kind of ουτοπια or nameless realm and would vanish like them in the sinking nursery fire-light among the picture-books and the day’s toys.

“Like me,” she said to them, “you were late in coming. The shepherds were here long before; even the cattle. They had joined the chorus of angels before you were on your way. For you the primordial discipline of the heavens was relaxed and a new defiant light blazed among the disconcerted stars.

“How laboriously you came, taking sights and calculations, where the shepherds had run barefoot! How odd you looked on the road, attended by what outlandish liveries, laden with such preposterous gifts!

“You came at length to the final stage of your pilgrimage and the great star stood still above you. What did you do? You stopped to call on King Herod. Deadly exchange of compliments in which there began that unended war of mobs and magistrates against the innocent!

“Yet you came, and were not turned away. You too found room at the manger. Your gifts were not needed, but they were accepted and put carefully by, for they were brought with love. In that new order of charity that had just come to life there was room for you too. You were not lower in the eyes of the holy family than the ox or the ass.

“You are my especial patrons,” said Helena, “and patrons of all late-comers, of all who have had a tedious journey to make to the truth, of all who are confused with knowledge and speculation, of all who through politeness make themselves partners in guilt, of all who stand in danger by reason of their talents.

“Dear cousins, pray for me,” said Helena, “and for my poor overloaded son. May he, too, before the end find kneeling-space in the straw. Pray for the great, lest they perish utterly. And pray for Lactantius and Marcias and the young poets of Trèves and for the souls of my wild, blind ancestors; for their sly foe Odysseus and for the great Longinus.

“For His sake who did not reject your curious gifts, pray always for the learned, the oblique, the delicate. Let them not be quite forgotten at the Throne of God when the simple come into their kingdom.”

December 20, 2014
Peter Frampton Asks A Question: "Do You Feel Like I Do About Internet Angermongers?"
Next Post

December 27, 2014 For Mind Blowing, Thoughts, on the Incarnation by Bl. John Duns Scotus
Browse Our Archives
get the latest from
Catholic
Sign up for our newsletter
POPULAR AT PATHEOS Catholic
1

Another German Bishop Denies Catholic Teaching...
Through Catholic Lenses
Related posts from Why I Am Catholic

The Long Shadow of the 1990s: A short...
I recently watched 17 Blocks on streaming. This is a documentary shot...
view all Catholic blogs
Copyright 2008-2020, Patheos. All rights reserved.