Will The Vatican Let Teilhard de Chardin Help Save The Church?

Does the name Teilhard de Chardin give you the willies? When you saw it in the title, did you immediately think that heterodox thoughts were about to be served up?

No? Perhaps, like me up until a few years ago, you’ve never even heard of the guy.

I first bumped into his mention in Jacques Maritain’s, The Peasant of the Garonne: An Old Layman Questions Himself about the Present Time

. Maritain didn’t seem too impressed with the Jesuit paleontologist who had, for all intents and purposes, been thrown into the cooler like Steve McQueen’s character in The Great Escape

In The Philosophy of Jesus

, so I gave it a look. I also enjoyed his short reflections On Suffering

, which I picked up from the shelves of my local public library. Having read both of these books, Teilhard seems to me to be a mystic. It should be no wonder, then, that some of his ideas wrinkled many feathers.

John Farrell seems to think that now might be a good time to rehabilitate Teilhard, and bring his thoughts on evolution to bear on a world that seems to have grown jaded with organized religion. Surely you’ve heard about the recent Pew Study showing the fall in the ranks of the faithful in the Church, along with the meteoric rise of the Nones. And if not Teilhard himself, than perhaps it is time for scientists, and theologians, who are standing upon his shoulders, to tackle anew the anthropology and theology of man.

Take a look at Farrell’s essay, Still Seeking Omega, hosted over at aeon. Therein, he discusses Teilhard’s legacy, and  ponders why the Church that embraces the Big Bang Theory, a subject that Farrell, author of The Day Without Yesterday: Lemaitre, Einstein, and the Birth of Modern Cosmology

Published at the end of the Year of Our Lord, 1950, the subtitle of that encyclical, Concerning Some False Opinions Threatening To Undermine The Foundations Of Catholic Doctrine, points towards concerns the Magisterium was having with theologian’s ideas that, though probably addressed by folks in ivory towers nowadays somewhere, have yet to trickle down to the Joe Six-Packs of the world.

Be warned. Farrell’s essay is 3600 words long, and it brings up events in the past that Catholics would like to forget (Galileo, anyone?) so you might want to bring a glass of your favorite beverage along for the ride. Here’s a snippet to get you started,

Today, popular attitudes toward evolution and religion take three forms, and the Vatican sits uneasily between two of them. The first, and most widely touted in recent years by prominent atheists, is that science in general and evolution in particular have completely debunked the claims of the major monotheistic religions.

The second, what might be called the deist alternative, acknowledges that Darwinian evolution undermines key beliefs of Christianity but is completely compatible with a generally theistic view of the cosmos, one that owes its creation to a God who is content to wind up the clock, as it were, launch the Big Bang, and let the Universe run by itself. This view does not embrace the traditional understanding of a benevolent deity who takes a personal interest in human history and answers people’s prayers. But it’s a middle ground between atheism and theism – and it tends to annoy atheists as much as it does religious traditionalists.

The third position, one embraced by many fundamentalist Christians and more conservative adherents of both the Roman Catholic and Eastern Orthodox Churches, is the frank rejection of science where and when it directly contradicts Christian doctrine or scripture, such as the belief that God created the world in six days, the story of Noah and the flood, or that Adam and Eve were the first parents of the entire human race.

For ample reasons, the Vatican is unwilling to embrace this third option. It has long had a proud tradition of balancing faith with reason, as in the classic works of St Augustine and St Thomas Aquinas. It is clear, however, that when it comes to evolution, Rome is not sure how to find a way to balance a continued support for the Catholic tradition and the consensus of science.

But such a way must be found. In 1988, Pope John Paul II wrote a remarkable letter to the head of the Vatican Observatory. It was a document later made public and can still be found on the Vatican’s website, though few really appreciate its audacity. The late pontiff not only found evolution to be compatible with Christianity, he directly challenged Catholic theologians to mine the science of evolution for deeper insights into the human condition.

‘Do we dare to risk the honesty and the courage that this task demands?’ he wrote. ‘We must ask ourselves whether both science and religion will contribute to the integration of human culture or to its fragmentation. It is a single choice and it confronts us all.’

Of course, Pope Pius XII also found evolution to be compatible with Christianity.

36. For these reasons the Teaching Authority of the Church does not forbid that, in conformity with the present state of human sciences and sacred theology, research and discussions, on the part of men experienced in both fields, take place with regard to the doctrine of evolution, in as far as it inquires into the origin of the human body as coming from pre-existent and living matter – for the Catholic faith obliges us to hold that souls are immediately created by God. However, this must be done in such a way that the reasons for both opinions, that is, those favorable and those unfavorable to evolution, be weighed and judged with the necessary seriousness, moderation and measure, and provided that all are prepared to submit to the judgment of the Church, to whom Christ has given the mission of interpreting authentically the Sacred Scriptures and of defending the dogmas of faith. Some however, rashly transgress this liberty of discussion, when they act as if the origin of the human body from pre-existing and living matter were already completely certain and proved by the facts which have been discovered up to now and by reasoning on those facts, and as if there were nothing in the sources of divine revelation which demands the greatest moderation and caution in this question.

37. When, however, there is question of another conjectural opinion, namely polygenism, the children of the Church by no means enjoy such liberty. For the faithful cannot embrace that opinion which maintains that either after Adam there existed on this earth true men who did not take their origin through natural generation from him as from the first parent of all, or that Adam represents a certain number of first parents. Now it is in no way apparent how such an opinion can be reconciled with that which the sources of revealed truth and the documents of the Teaching Authority of the Church propose with regard to original sin, which proceeds from a sin actually committed by an individual Adam and which, through generation, is passed on to all and is in everyone as his own.

There is a lot more to Humanis Generis than these two paragraphs let on. Cans of worms had been opened, and Pius XII was laying down the ground rules for how the Church would deal with modern ideas that seemed to clash with Catholic dogmas and doctrines. For a deeper discussion around this encyclical, see Fr. Brian Van Hove’s article, Looking Back at “Humani Generis” in the December 2013 edition of the Homiletic & Pastoral Review.

Back to Farrell’s lament, in 2011 I remember reading a blog post by Michael Flynn entitled, Adam and Eve And Ted And Alice. Flynn was replying to a brief piece that Farrell had posted on his blog at Forbes that raises the same questions as his recent essay in aeon. Flynn opined that,

Lest you think that is just an artful dodge, it is very similar to what Teilhard himself said in unpublished pages dated in 1947, that can be found  in his posthumously published Christianity and Evolution

…to rethink the dogma of original sin is imposed on us from a third quarter of human thought: it comes not from science, nor from theology, but from Scripture. The most recent advances in exegesis insist that what we should look for in the first chapters of Genesis is not ‘visual’ information about man’s history but teaching about his nature.

So we have a clear road ahead.

Maybe we do, and maybe we don’t. Top minds are working on it, I’m told. They might just need a patron saint named Teilhard to guide them between the Scylla and Charybdis of modern man’s understanding (or willful misunderstanding) of the Magisterium’s thoughts on the biological sciences.

A video clip of Sr. Ilia Delio, OFM, PhD, discussing Teilhard. Watch it, if you dare.

And from the Evangelical Channel, Peter Enns shares 11 recurring mistakes in the debate over the “historical Adam.”

Is your head hurting yet? 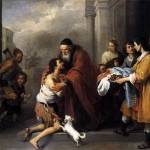 May 6, 2015
Joe Six-Pack's Year Of Mercy Art Suggestions (Not That I Was Consulted)
Next Post 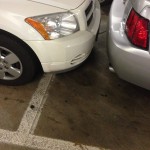 May 18, 2015 Here Is What A Near Occasion Of Sin Looks Like...
Browse Our Archives
Related posts from Why I Am Catholic