Joe Six-Pack’s Year Of Mercy Art Suggestions (Not That I Was Consulted) May 6, 2015 Frank Weathers

It’s probably too late, because what’s done is done. But if there is one thing that Catholics have in common with Marines it’s this: we aren’t happy unless we’re bitching about something.

So yeah, that playing card inspired logo for the Year of Mercy?

If the message is Merciful like the Father, then why use a new piece depicting the Risen Son pulling the Good Samaritan/Fireman’s Carry act?

Obviously, nobody from the Vatican asked my opinion. I’d have warned them away from the Warner Brothers background, and the “is Jesus still nailed to the cross?” puzzlement this art inspires.

But Joe Six-Pack took an art appreciation course as a mick back when I was going to college during the stone age. Said course helped me come up with a few alternate ideas based on a parable that does everything the Year of Mercy longs to call to our minds, but which this logo fails to do. You may have heard of it. Some story about a lost son.

Stand by for classic art.

1. Rembrandt to the rescue.

3. Batoni swings for the fences, hits a grand slam.

Would you believe there are lots of other examples available on Wikipedia? Of course you would. Are you looking forward to the official logo appearing at your parish in poster size? Do you think kids will want to play hooky from school so they can gaze upon it?

*If PDAs offend thee, look away

Several of my Patheos Catholic Portal brethren don’t cotton to the logo. Can’t say I blame them.

Simcha Fisher explains, The Year of Mercy logo stinks. Here’s why it’s okay to say so.

Deacon Greg, however, plays it straight with, The Jubilee Year of Mercy now has a website—and a logo. Here’s a follow-up post, complete with back story, biography of the artist, etc. It turns out we can blame the Jesuits!

I’m sure many people, somewhere, like it just fine. De gustibus non est disputandum, though the fellow who coined that phrase obviously never met the internet. 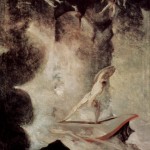 May 14, 2015 Will The Vatican Let Teilhard de Chardin Help Save The Church?
Browse Our Archives
get the latest from
Catholic
Sign up for our newsletter
POPULAR AT PATHEOS Catholic
1

Toxic Masculinity: What It Is, and...
suspended in her jar
Related posts from Why I Am Catholic

Begging for my refugees
Starting a nonprofit for those who need The Shoeless Banshee is in...
view all Catholic blogs
Copyright 2008-2020, Patheos. All rights reserved.