It happened on July 10, 2015 at St. Helena Catholic Church in Amite, Lousiana. Steve Hardy, writing for The Advocate out of Baton Rouge, has the story,

Tim Ardillo said he was standing next to his mother’s coffin leading his young son to receive a blessing when the priest presiding over the funeral Mass denied him communion.

The longtime Catholic said the priest told him it was because he married outside the church, but Ardillo doesn’t think that’s the whole story.

He believes he was denied the sacrament because, as is stated in his mother’s obituary, he is married to a man.

The priest in question, the Rev. Mark Beard, of St. Helena Catholic Church in Amite, did not return multiple calls seeking comment in the week following the July 10 funeral.

Ardillo said the church passed out a quotation from 1 Corinthians at Mass the next Sunday, which states, in a portion highlighted in red ink, “Whoever eats the bread or drinks the cup of the Lord in an unworthy manner will be guilty of sinning against the body and blood of the Lord. A man ought to examine himself before he eats of the bread and drinks of the cup. For anyone who eats and drinks without recognizing the body of the Lord eats and drinks in judgment of himself.”

Ardillo said he has since received an apology from the Diocese of Baton Rouge, which directly oversees the Amite church, and a personal apology from New Orleans Archbishop Gregory Aymond, though Aymond’s office declined to comment on the matter for this story.

The standing of gays and lesbians within the Catholic Church is complicated, with the church opposing same-sex marriage but counseling respect for LGBT people.

July 16, 2015
Bishop Richard Stika's Statement On The Loss Of The Marines Killed In Chattanooga
Next Post 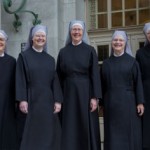 July 23, 2015 The Little Sisters Of The Poor Take Their Case To SCOTUS
Browse Our Archives
get the latest from
Catholic
Sign up for our newsletter
POPULAR AT PATHEOS Catholic
1

O Stay Home, All Ye Hypocrites
Michelle Arnold
Related posts from Why I Am Catholic