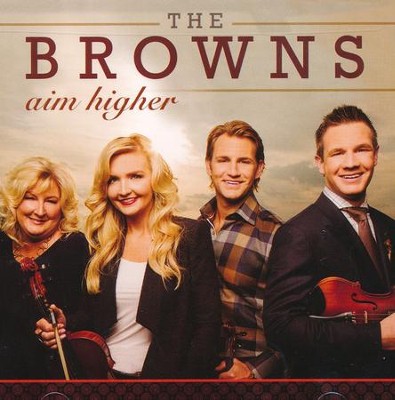 The Browns have gone through a few lineup shifts, beginning with two sisters and two brothers, then down-sizing to four voices after the older sister got married, then enjoying her return along with her husband, Nick Trammell. But for their last couple projects, it’s back to just mother Shelly, daughter Michaela, and brothers Adam and Andrew. The three younger siblings enjoy a strong blend, and they also please crowds with their dynamic violin trios. Aim Higher is the family’s second release with Stowtown Records, set for official release this Friday.

* “On the Winning Side” sounds like a really good Collingsworth Family tune. The lyrics have that wonderfully martial flair that recalls hymns like “Stand Up For Jesus,” “Faith is the Victory” or “Onward Christian Soldiers.” I think I even heard one of the boys putting some growl in his vocals at the end. More of that, please! Kudos to Wayne for crafting a great tune together with Michaela and Shelly themselves.
*A cover of “Didn’t it Rain” is gratifyingly rocky.
*Like MercyMe’s “Greater” from the Erwins’ last album, Third Day’s “Soul On Fire” gets the southern gospel family treatment here. And once again, I prefer the southern gospel family treatment. Adding harmony and fiddles never hurt anything.
* “Know You Now” has a great tune and makes me think of one of the Imperials’ schmaltzier 70s moments (which I mean in a good way–hey, I like SOME schmaltz!) Michaela sings it very prettily, but I could also hear someone like Jim Murray on it.
*Jeff Bumgardner wrote “Sinners Come to the River,” a classy hymn-like tune in a minor key. It’s head and shoulders above every other song on the album. Indeed, it’s head and shoulders above a lot of new songs I’ve heard lately. I would say it’s worth the price of the album, except that phrase is outdated now that you can just go hear any song you want to on Spotify, but it’s the kind of phrase I would have used before it became passe. I found it especially refreshing that Bumgardner worked to use as many perfect rhymes as possible. Also, the tune is simple and memorable, making it ideal for congregational use. Here’s a verse of the thoughtfully crafted lyrics:

Sinners come to the altar, lay your burdens down
For a prize awaits in the victor’s crown
Hear the still small voice whisper “Child, draw near
For the ransom’s paid, your salvation’s here.”

*The title track is insipid and riddled with cliches. Example:  “There are so many reasons you should go for it. Yeah, you’ve gotta try, ‘cuz you just might fly!” I could unleash all my critical ire on this thing piece by piece, but I’m trying to be less mean these days, so I’ll just leave the rest of it with a “no comment.”
*I’m not opposed to trying new stuff, but the attempt to Charlie Daniels-ify “Touch of the Master’s Hand” is one novelty idea that needed to stay on the shelf. The aggressive, snarly, half-rapping sound they’re applying here works so well on “Devil Went Down to Georgia” because the lyrics are so cocky. You can’t make a song about a self-assured young hot-shot and the devil trash-talking each other without putting some snarl into it (and even a little salty language!) But “Touch of the Master’s Hand” is about a sweet old man who plays sweet music on a sweet old instrument. There’s no conflict or tension in the lyrics. I guess you might worry at first that someone won’t bid what the violin is really worth, but I’m not sure what’s so edge-of-your-seat about that. Then it’s a great moment when the old master starts to play, but I’m pretty sure he wasn’t playing Charlie Daniels. The whole concept is just disastrous. Ideally, it would be forgotten about as quickly as possible, but I have a sinking feeling they’re going to turn it into a Live Moment instead.

* “Love Let Go” is nicely produced, but the melody is bland, and Michaela doesn’t sing it with any soul.
* “You Speak to Me” is not a bad song, but it’s in the tradition of songs like “He Lives,” which offer as an answer to the skeptic that God speaks personally to us and lives in our hearts. Understand that I have nothing against declaring our personal relationship with God, a necessary part of any Christian’s life. What bothers me about these kinds of songs is that they lean exclusively on personal experience as our evidence for God’s existence. The opening line of “You Speak to Me” says “And if the world tries to tell me that you do not exist, and I’m told to deny you, my heart will still know this… you speak to me.” Of course, the vast majority of us will experience this “speaking” through indirect means like Scripture, prayer, and so forth, but nothing so direct as an audible voice. Hence, we cannot base our faith on how strongly we feel the presence of God. Our faith must be grounded in the gospel’s truth claims that God was incarnate and came to live, die and rise again at a particular time and place in history. This is what Christianity offers that no other religion can. By contrast, many religious people can claim that their preferred god “speaks” to them. We will get nowhere in terms of discovering whether or not Christianity is actually true simply by comparing feelings. I’m afraid that’s what songs like this are missing, as heartfelt and sincere as they are.
I see that the only track I’ve neglected to mention is the instrumental version of “Fur Elise.” This is probably because I didn’t have a whole lot to say about it either way. It’s fun, but nothing new if you’ve already heard one of the Browns’ modern classical arrangements.
Final Thoughts: This is pleasant listening, but with the exception of a couple great standout tracks, I was left a tad disappointed for an album with a title like Aim Higher. The Browns’ talents are better appreciated in a live concert setting than in the studio.
Rating: 3.5 stars
Review copy provided. A positive review was not required.