My dad was big on perseverance proverbs. "When the going gets tough, the tough get going," he would remind us. "Quitters never win and winners never quit." It made sense that he would emphasize persistence. The youngest of ten children of a rural North Carolina family in the Depression, he had to be persistent in order to work his way through school and into the world of newspaper journalism and, eventually, publishing. My dad wanted us to fulfill our potential and contribute to society. I appreciated his desire for his children to use their gifts, and I admired his accomplishments. But it would have been nice every now and then, growing up, to be able to quit something! I would not have been missed on the basketball team, for instance, and enrolling in calculus was a mistake from the very beginning.

Paul, in writing to the Philippians, was just as insistent as my dad that one can never give up but must press on. I don't know if he would have insisted I stay on the basketball bench or the back row of calculus class. But I know he would want for me what he clearly wanted for the Philippians—not a perseverance toward success, but a perseverance of the soul. He would want me to persevere in my walk with Christ. He is writing to the Philippians from prison. His physical movements are severely limited. He is certainly not engaged in any chariot races. Yet this is the metaphor he chooses to inspire the Philippians to press on. It is an athletic, physical, and forward-moving metaphor.

"I do not consider that I have made it my own, but this one thing I do: forgetting what lies behind and straining forward to what lies ahead, I press on toward the goal for the prize of the heavenly call of God in Christ Jesus" (Phil. 3:13-14).

In Roman culture the circus, with its chariot races, provided the most popular form of entertainment. The first and the greatest circus of all was the Circus Maximus in Rome. Philippians 3:13-14 describes the charioteer, intent on the race, his eyes fixed on the front, not daring to look behind lest the slightest pressure on the reins (wrapped around his body) produce a false move and cause him to lose the race and possibly his life. (Williams, Paul's Metaphors, 262)

Persistence proverbs are a staple of self-help, achievement-oriented wisdom. We persist so we can succeed in personal goals. Often, though not always, perseverance is seen as a positive quality because it is a means of winning out over others. But for Paul it is a way to get closer to Christ. It means not looking back, but looking ahead toward Christ with single-minded purpose.

An important part of perseverance is not looking back. Jesus himself in Luke 9:62 says "No one who puts a hand to the plow and looks back is fit for the kingdom of God." The chariot metaphor is a perfect vehicle (pardon the pun!) for Paul to explain to his readers that those who long to be like Christ face danger in looking back. David Williams in his book Paul's Metaphors: Their Context and Character, points out that Paul knew the dangers of looking back. He knew that dwelling on past achievements could bring complacency and that dwelling on past failures could make one despondent. For Paul, both are best forgotten in the interest of pressing on toward the objective.

Our race is not yet finished. Our work is not yet done. There is still much to do for Christ, and much to be achieved in the quest to be like Christ. At the Circus Maximus in ancient Rome there was an elevated cushioned throne called a pulvinar for the gods and the human sponsor of the event. From the pulvinar, the sponsor would give out the prize. The possibilities both of service and of sanctification are not exhausted until the Christian is summoned to Christ's throne to receive from him the prize that awaits the victory. (Williams, p. 262)

Paul's notion of perseverance and its goal are different from the secular success motivation of sayings like "See you at the top!" In contrast, Paul's brand might be called a "perseverance of the soul." We see this perseverance of the soul in the African-based belief system, reflected both in the culture of the slave era and today, which places high value on patient and perseverance. A Yoruba proverb declares, "the snail climbs the tree carefully and slowly." This statement is typical of a whole body of wisdom praising the virtues of making steady progress toward a goal in contrast to haste, which often fails. An often quoted biblical saying in African American communities is "The race is not to the swift but to him that endureth to the end" (a collation of Ecclesiastes 9:11 and Matthew 24:13).

Other examples of perseverance sayings are "Keep your hand on the plow and hold on!" which is drawn from Jesus' saying in Luke 9:62. "Cheer the weary traveler, along the heavenly way," "Keep inchin' along, like an ol' inchworm," and "Walk together children, don't you get weary; There's a great camp meetin' in the Promised Land." 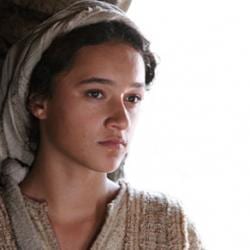 Good People All: Have a Blessed Christmas
Vance Morgan
4

When Roman Catholics Feel a Little Protestant (and even Trumpy)
D. G. Hart
Get Patheos Newsletters
Get the latest from Patheos by signing up for our newsletters. Try our 3 most popular, or select from our huge collection of unique and thought-provoking newsletters.
From time to time you will also receive Special Offers from our partners that help us make this content free for you. You can opt out of these offers at any time.
see our full list of newsletters
Editor's picks See all columnists