You Don't Have To Be Gay 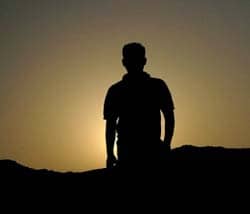 When I was six years old I realized that I liked boys in a way that would be my undoing. By subtle sign and softly spoken barb it was made quite clear to me that "boys liking boys" was not going to work in my world. So, I learned to manage it.

I found that I could, if I really concentrated on it, believe that I was straight -- or at least not gay. I had girlfriends with whom I never had sex. I acted straight. But I knew that my soul's completion would be with another man's body. There was only one thing that I desired more, and that was to be unimpeachably straight. Which is how I got mixed up in reparative sex therapy.

I went to one of the world's biggest Evangelical seminaries. At the crossroad of the campus there was a bulletin board where students could post fliers and advertisements.  I was walking by one morning when I stopped and saw a flier that said, "You Don't Have To Be Gay.  Talk to us, we can help." Below the headline was a name and number.

"You Don't Have To Be Gay." The thought was a revelation to me. I'd never thought of being gay. It wasn't something I wanted or understood. I thought of myself as having this little fenced off part of my life that kept falling in love with my roommates. But I wasn't gay; I could manage it. I wasn't gay. I wasn't. I pretended to look at another posting while I wrote the name and number on the palm of my hand.

I remember going back to my dorm room, getting out a sheet of notepaper, sitting down on my bed and writing: "My name is Paul.  I saw the note on the community board and I would like to talk to you.  I have struggled with being gay for a long time. . ."

That was the first time I ever wrote the first person pronoun and the word gay in the same sentence. I felt absolutely strange about it. There it was in black and white. I was gay. And I was going to be fixed, because You Don't Have To Be Gay.

I was assigned to work with a counselor named Tom. "Tell me about yourself," he directed. I had that weird, almost sick feeling you get when you cross the high point on a rollercoaster and begin the long, weightless drop to the bottom.

I began to talk. And I talked for weeks and weeks. And the more I talked, the more I felt like I was in the hands of an amateur. Finally, Tom said, "So tell me about Jesus -- what does he think about all of this?"

And for the first time in my life I thought, "Jesus? He doesn't really care one way or the other. This isn't about Jesus. This is about people like you, Tom. This is about all of the people that don't like men having sex with men. This is about the ways in which people want to control the way the world is." Tom tried more questions.

"Tell me, which member of your family would be hurt the most by your being gay?" All of a sudden I could see where this was going. If you can't be straight any other way, shame might just work. But shame wasn't something that I needed. I'd spent enough years being ashamed. It was just such a mean, stupid, pointless question. No wonder Tom turned straight. Pile up enough shame and any queer might do the same.

I guess that I continued to meet with Tom because I thought at some point he would get to the good stuff. But he never broke open the secret of being straight. At the end of our counseling sessions I would walk away and wonder, "Why can't I discover the long buried key to becoming straight? What is all of this stuff that just stays buried inside. What am I hiding from?"

I had my final counseling session with Tom at the end of the semester -- the end of my unremarkable career in reparative sex therapy. Tom said to me. "Paul, you have to believe that you can overcome this. You have to believe that God wants to help you. Look at me. My wife is going out of town this weekend. And I know that I can be away from her for two days and not think about dick."

Not think about dick. Tom could keep himself from thinking about dick. I sort of stared at him. He was so nice, so kind. He so wanted to help me. He so believed that You Do Not Have To Be Gay. And in that moment I understood that even if God could help Tom not to think about dick, he couldn't help me.