"What is the difference between a Buddhist and a non-Buddhist?" Answer: "A non-Buddhist thinks that there is a difference." ~ Dr. Mark Epstein 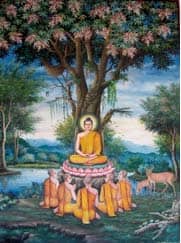 Dzogchen Ponlop Rinpoche has likened Buddhism to crystal clear water that takes on characteristics of the particular cup in which it's poured. Here's a primer on some basic schools of practice popular in the West. You might also consider them as branches of a tree, or paths. I think you'll sense, by the end of this brief tour, that whether you drink from paper cup or ivory chalice, crystal goblet or backpack thermos, all waters return to the Source. This universal watershed can quench your inmost thirst.

For starters, there's Theravada, sometimes known as Original Buddhism (also associated with Vipassana, or Insight Meditation). It originates in such South and Southeast Asian cultures as Cambodia, Laos, Myanmar, Sri Lanka, Thailand, and Vietnam. When we say "Buddha," here, we're referring to the historical figure, and his teachings as recorded in Pali. Since he discovered that the seeds of his Enlightenment are within everyone, some mottos in this tradition are: "Look within" and "Be a lamp." Mindfulness meditation comes to us from this general school, with its viable applications for medicine, psychology, the workplace, etc., as well as the movement toward emotional intelligence.

Then there's Zen. The word Zen means meditation. (What isn't potentially an opportunity for meditation?) One option within Zen is the Rinzai school contemplation of koans, levers of enlightenment using words to go beyond words (such as "What is the sound of one hand?" And "Show me your Original Face, before your mother or father were born."). Another option is the Soto school of "just sitting " (silent illumination). (In America, elements of both schools are often taught in the same temple.) First flourishing in China, where it found resonance with Taoism, Zen was brought to Korea, Japan, and Vietnam. Along with the historical personage of the Buddha, Zen also pays particular attention to the seeds of enlightenment ("Buddha nature") within all beings. Stressing intuition and spontaneity, it might balk at surveys such as this, preferring a plain, everyday motto like "Just do it." If life were a movie, its motto might be: "Keep a blank screen."

The next formal branch, Pure Land, is the biggest in the world and in America (where it's also the oldest, going back many generations now). The Pure Land can refer to a cosmological realm neighboring nirvana, and also the clarified field of one's own awakened mind. Also originating in East Asia, its sense of the Buddha is not only as the historical figure but also as bodhisattva -- motivated out of utmost compassion with a goal of enlightenment for everyone. Here the motto is simply the name of the Buddha.  Whether you call the act chanting or recitation, it's yet another entry into Buddha mind, an awakened way of being.

The most recent tradition to reach Western shores is Vajrayana. Originating in high mountain Himalayan culture, it comes to us from Mongolia, Bhutan, and Tibet. Here keen analytic discernment is married to heartfelt compassion. Buddha is seen as but one of tens of thousands from throughout time and space. Advanced practitioners are taught complex visualizations, with a plentiful pantheon of Buddhas and Bodhisattvas as objects of meditation, and which embody different aspects of enlightened mind: wisdom, compassion, skillful action, etc. A unique aspect here is tantra, integrating elemental forces interwoven throughout cosmic and the human realms. Of its many pithy mottos, a primary one is "Honor the resistance."

The above is a convenient grouping. Looking closer, the plot thickens. The Pure Land path, for example, includes different iterations by region (China, Japan, Korea, Vietnam), as well as traditional and modern interpretations of each. (In the West, two leading Pure Land branches with multiple practice centers include Jodo Shinshu, and Fo Guang Shan.) Pure Land's emphasis on recitation is often mistaken for Nichiren and Soka Gakkai, themselves outgrowths of yet another path based on the Lotus Sutra (Tendai). Soka Gakkai has the most racially diverse membership in the West and is known too for its energetic promulgation of Dharma, and its engaged stand for world peace.