The parsha (weekly Torah portion) for the week ending June 5 is Shelach Lecha. Shelach Lecha means "send to you" in Hebrew and are the sixth and seventh words (and first distinctive words) in the portion. Be sure to check out the video at the end for a great perspective on the Torah portion.

We ended the last parsha with Miriam being sent out and Moshe pleading with G-d to cure her, even after she spoke badly about her brother's wife. Shelach Lecha picks up here where G-d tells Moshe to send spies out into the land of Canaan (essentially modern-day Israel and the surrounding areas like Jordan, Syria, and parts of Lebanon and Egypt). The head of each of the twelve tribes began their voyage into the unknown, venturing all the way to approximately modern-day Hebron. In Numbers 13:23 it says they found pomegranates and figs as well as a branch of grapes so large it took two people to carry it. 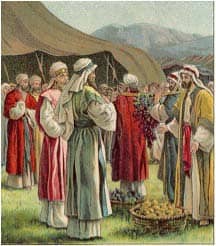 After a 40-day excursion, they returned to report to the Israelites about this new land G-d was sending them to. The traditional saying is that they reported the land flowed with milk and honey. (Interestingly, in the Gemara there are several rabbis who claim that they saw the land flow with milk and honey. Rami bar Ezekiel said goats grazing under fig trees dripped milk and honey flowed from figs.) While clearly not literal, they speak about the potential for agriculture in this land.

However, ten of the spies reported that giants inhabited the land and the cities were very fortified. The Israelites began to talk. If all these horrible things awaited them, why did they leave Egypt and the security of their slavery? This wasn't the first time they doubted G-d and their future. They were afraid to attempt to enter Canaan again and cried for Moshe and Aaron to turn back. Only two spies, Joshua and Caleb, brought a different story and tried to calm the people. These two leaders tried to impress upon their fellow Israelites that it was not a fruitless endeavor and they should forge ahead. G-d was with them and they should not fear (again, remember the quails here?).

Well, the Israelites were not in a mood to listen; rather they lifted up stones to throw at these two spies when G-d made G-d's presence known at the Tabernacle. G-d complained to Moshe, "How long will this people despise Me? And how long will they not believe in Me, for all the signs which I have wrought among them?" G-d threatens to get rid of the whiners but Moshe reminded G-d of something that G-d had shared with him, "The LORD is slow to anger, and full of loving-kindness, forgiving iniquity and transgression . . ."

At this point G-d states that none who had been slaves, save for Joshua and Caleb, will enter Canaan. It is still the Promised Land but now only for their children and not this generation. The ten scouts who brought negative and fearful reports died of plague while Joshua and Caleb lived. The people were to wander in the desert for another forty years (corresponding to the days spent in Canaan) until the generation who had seen G-d's miracles had all passed.

The Israelites weren't thrilled. Hadn't they escaped from Egypt? Hadn't they eaten manna for so long? Weren't they entitled to enter? So, despite G-d's warnings and that of Moshe, they Israelites tried to enter Canaan by force and were brutally pushed back. It no longer was the right time to enter this land of milk and honey.

G-d next lays out the provisions for when they do enter the Promised Land. Offerings and gifts were to be set aside for G-d. Additionally, there were repercussions for failing to fulfill a mitzvah (commandment). These involved meal offerings and wine, but also punishment. Violating the Sabbath was looked at very seriously and even called for stoning.

The last part of this parsha deals in fringes or tzitzit. The men were to put fringes on all of their garments, to look upon them and remember the mitzvot G-d has given them. There is a special way of tying the fringes and they were to only go on the four corners. Additionally, it says to include a thread of blue. Today this commandment is being disputed since the rabbis are unsure as to exactly what blue and how it was made. Therefore, many groups leave off the blue thread because they feel to do it wrong would be worse than not doing it at all.