On Tuesday, five intense days of showdown between President Obama and visiting Israeli Prime Minister Benjamin Netanyahu ended with the prime minister delivering a bombastic address to a joint session of Congress. The standoff began the week before, when Netanyahu objected furiously and publicly to a speech where Obama suggested that the starting point for negotiations over a Palestinian state should begin with the legal borders of Israel before the Six-Day War in 1967, when Israel seized the West Bank and other Palestinian territories. Obama responded with a careful speech before AIPAC, the country's most powerful pro-Israel lobby, and Netanyahu finished with his rare address before the American legislature.

Netanyahu's reaction, as well as that of many American politicians from both parties, illustrated how politically perilous it is for a president to cross Israel. Obama's proposed peace plan isn't holy scripture, but neither is it bold or unprecedented. Negotiating a Palestinian state from the pre-1967 borders has been the assumed (though not explicitly stated) core of America's Israel policy for decades. It has been embraced by two previous Israeli leaders, and has the support of most of the international community. But by saying it aloud, Obama is "throwing Israel under the bus," according to Mitt Romney, and "disrespecting an ally," according to Sarah Palin. Coloring his rebuke of Obama just a shade lighter, Senate majority leader Harry Reid said, "No one should set premature parameters about borders."

I suspect most Americans look on the Israel-Palestine controversy, quite rightly, as distant, complex, and perplexing, if not utterly impossible to form a sound opinion about. Most people would probably read my previous two paragraphs and not quite get what all the fuss is about. I don't quite get it, either. But what I saw from Washington's power brokers over the past week—vicious attempts to enforce orthodoxy, hysterical determination to shut down debate, and theatrical sycophancy toward a foreign leader—are so alarming that they must be addressed. If we are ever to arrive at a sensible Mideast policy, this kind of irrationality clearly will not do.

There is nothing wrong, of course, with American politicians strongly supporting Israel, and favoring policies that enhance its security. But close alliances naturally come with expectations; America's allies have arguably even more responsibility than others for behaving as morally and legally as we expect our own government to behave. Although its enemies are deadly and unrelenting, Israel has, in its short history, regularly pushed the boundaries of legality and humanity, from its persistence in violating international border agreements to its unrepentant displays of gratuitous violence. Settlement-building excepted, American administrations under both parties have rarely dared to condemn the excesses.

No other American ally enjoys this level of deference, and still Obama's critics have tried to portray his tiny bit of sternness as a heinous betrayal. Then they sat through a speech in which Netanyahu made a number of outrageous claims, including that Israel is "not an occupying force in the West Bank," and leapt to their feet in applause each one. As one critical Israeli columnist lamented, "Last night we saw that the Americans will buy anything, or at least their applauding legislators will."

The zealous one-sidedness on display in the House chamber Tuesday revealed an astounding credulousness toward Netanyahu (who has boasted about his ability to manipulate the U.S.) and a steadfast disinterest in deeper moral questions about the Israeli-Palestinian conflict. The peace both Obama and Netanyahu claim to want depends on bringing both sides to the table, and accomplishing that will mean making tough demands of both. But when the American legislature rushes to fawn over one side's leader and literally applaud his belligerence, they have sent a clear message to the Palestinians that America's commitment to justice comes second to its ideological attachment to Israel. 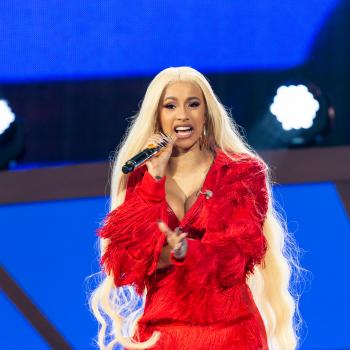 Cardi B. and The Theology of the Devil
Anthony Costello
2

Americans Should Be Comfortable with Historical Complexity, Not Afraid of It
Chris Gehrz
Get Patheos Newsletters
Get the latest from Patheos by signing up for our newsletters. Try our 3 most popular, or select from our huge collection of unique and thought-provoking newsletters.
From time to time you will also receive Special Offers from our partners that help us make this content free for you. You can opt out of these offers at any time.
see our full list of newsletters
Editor's picks See all columnists