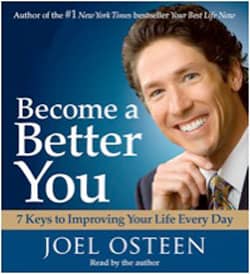 Mr. Osteen, here's the thing. I've realized that I've been writing, speaking, and preaching about you as well. I've realized that The Other Jesus was also written in response to your Jesus of handouts and new cars—I can't hang with that Banker Jesus any more than with the Spiteful Jesus. I've realized that I'm also tired of cleaning up your messes, of trying to constantly reorient Christian faith back to something real and true to scripture, tradition, and reason.

You and other Prosperity Gospel preachers advance a vision of God that is transactional: if you do this, then God will do that. He has to, in fact. Because a verse here or there in the Bible says so, however little it reflects God's actual redemptive work in the world.

And I'm here to tell you, Sir, in the same language I use with anyone who imagines we can be in a transactional relationship with God, that this isn't what Christian faith is. Praying the right prayer often enough to get what you want, believing really hard in Jesus to get what you want are not true to the Christian story, or to logic. To imagine that you, or your followers, or the person out in the bookstore or TV land who is exposed to your message somehow influences the God of the Universe, the Creator of All That Is, by his or her personal actions is not belief in God.

It's belief in magic. Put your hands together, say a few faithful words, and the Universe will give you what you ask.

Your life is lifted up as a shining example of God's blessing, and well it might be. But Sir, I suspect that the money to buy a former NBA arena for your mammoth Lakewood Church didn't just flow into your hands because God blesses you for your teachings. I suspect that you got that money because you draw a crowd, because you sell a product that is always more enticing than the hard and lifelong work of genuine Christian spirituality and authentic belief.

I know Christians who feel uplifted by your focus on God's love, and non-Christians who love your sermons because they make them feel better about themselves. And both of those things are lovely. Telling people that God will give them whatever they faithfully ask for, assuring them that God will deliver them from their financial difficulties, that they can live their best life ever is tremendously appealing. If you were my financial adviser, I could sleep soundly at night.

But this assurance of the good life is also a tremendous theological falsehood. It's not true to the experience of lots of Christians, who believe yet still suffer. Many people of faith suffer from poverty that will never ease, from sickness that will not be healed, from losses that cannot be made right in this life.

Even during some of my times of greatest faith, I faced horrible emotional, physical, financial, and spiritual suffering. My Assembly of God grandmother, the most devout Christian I have ever known, has lived her entire life in poverty, and has only the streets of gold she imagines as her heavenly reward to look forward to. Students at Baylor show up in my office every semester after they have heard from their pastors that if they only had enough faith, their problems—that depression or anorexia, that unplanned pregnancy, the financial disaster befalling their parents—would be taken care of. And when they aren't taken care of—when, in fact, as problems do when they're ignored, they get bigger and more complicated—my students have been left in a genuine crisis of faith, or with no faith at all.