The part of me that hates violence in all forms wants to draw some very clear lines around religion and claim that there is no room for violence here. And yet our histories are full of it, and we should not deny the blood and pain that make up our pasts, no matter how uncomfortable that is. Even pacifist religions have their histories—Jainism being a reaction against the more violent aspects of the Vedic culture from whence it came. Modern Paganism tends to be non-violent, but our ancestors were as bloody as anyone else's.

In its drama and danger, violence can be incredibly powerful. Like all powerful things it has the capacity to change our consciousness, and alter how we see ourselves. Whether that's the frightening ego boost of the sacrificing priest, or the power of self-denial for the extreme devotee, there is a certain kind of magic in the violence we might do to ourselves, and to others.

There are many ways of being violent to self, and self-denial is by far the most readily available. In fasting and physical suffering we can torture ourselves to any degree in pursuit of religious experience. We might do it as self-punishment, as atonement, as offering and sacrifice, or as means to open our minds to the divine. From modest acts of abstinence through to destroying our lives and health, religions can actively encourage us to practice a great deal of violence against ourselves. Who is to stop us? Half the time it isn't even visible to an outsider.

Cut your arms up with a knife because you are a depressed teenager, and you may get some interventions. Call yourself a mystic, get some religious paraphernalia, and people will understand what you do in entirely different terms and probably won't try to stop you. They might even consider it an infringement of your human rights. If you want to starve yourself to death for deity, who has the right to say that's not okay? I do, however, have my doubts about whether it's at all acceptable, and whether religion can become an easy focus for people in pain and psychological distress who need a context in which to express anger on their own bodies.

I know what it is like to hate your body and self, and to want to destroy that body by starving, beating, walking, or dancing it to destruction, to want the flow of blood and the rush of pain, and the need to atone for existing with tears and agony. That's not been about religion for me, but about deep and long held distress. If I'd been given a religious context in which I could easily do that to myself, I would have adopted it.

It's very hard to stand on the outside of someone else's practice and make any kind of judgments about what they are doing and why, but when that practice is violent, we should perhaps ask questions. That doesn't mean denigrating anyone. Compassionate questions, and an open mind about the answers, might help reduce the motivation for violence in people whose self-hatred has become tangled up in their religion.

Why are philosophy, empiricism falsely joined at hip? No good reason.
Rick Snedeker
4 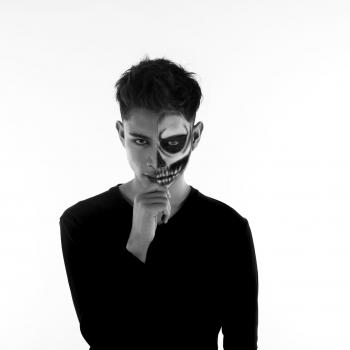 The Anatomy of Hate
Inas Younis
Get Patheos Newsletters
Get the latest from Patheos by signing up for our newsletters. Try our 3 most popular, or select from our huge collection of unique and thought-provoking newsletters.
From time to time you will also receive Special Offers from our partners that help us make this content free for you. You can opt out of these offers at any time.
see our full list of newsletters
Editor's picks See all columnists