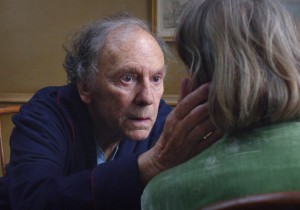 Negative reviews or critically acclaimed movies are like exclamation points: one only gets an indeterminate but exhaustible number in life before people stop paying attention. Indifferent reviews are more like semi-colons: people begrudgingly admit you are correct but hate you anyway for being such a smarty-pants.

Given that particular rock and hard place, I reluctantly concede that while  Amour did not particularly anger or infuriate me, neither did it move me. Michael Haneke’s films have always struck me as intractable–cleverly constructed but devoid of insight. They remind me of M.C. Escher drawings in that they initially appear to go only in one direction but, in fact, go nowhere. They have illusions of movement, but they are really about stasis.

Amour begins with Georges and Anne living in a stable but fragile domestic harmony that is soon to be undone by a series of strokes. The pieces of the plot trap are simple enough. Anne won’t get better yet asks Georges to promise to never take her to a hospital again. Hired help treat Anne like a body rather than a person. Friends respect Georges but their condolences are like bailing  a pool of suffering with a thimble of weekly kindnesses and their respect is like a cup of hot tea to a man dying of thirst in the desert. Family–in this case an emotionally expressive but pragmatically useless daughter–insist that Georges is incapable of bearing the burden alone but offer no alternatives to his plodding, persistent endurance as Anne becomes more and more dependent and less and less present.

There are no shortage of films or plays that drill the subject matter of aging and death seeking an emotional gusher, and some deliver: Away from Her, Wit, Ikiru. If I had to pick one that Amour reminded me of, though, it would be King Lear, since both have a relentless, despairing nihilism that feels all the more artificially constructed for being totally uninterested the lives led by the characters now surviving solely on the good graces they somehow engendered.

The 2012 film that kept running through my head while watching Amour was Compliance, another work that mistook relentless pessimism for bracing intellectual honesty and which laid its Mousetrap-style plot in motion in its scene one and proceeded forward with a dreary, mechanical predictability.

In Riddley Walker, Russel Hoban’s post-apocalyptic fantasy novel, the eponymous protagonist passes a pit in which his father died and laconically muses, “Your turn now, my turn later.” That life ends in death will be a revelation or plot spoiler for only the very young or the very sheltered. How one in a story dies or meets that death can be, perhaps should be, infused with meaning, revealing of the deepest spiritual questions we ask and the answers we grope after. In Amour, however, the plot seems clinically divorced of any other part of life; death becomes not the end of life but the metonymical substitute for it. 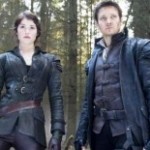 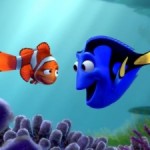 February 23, 2013 Finding Nemo (Stanton and Unkrich, 2003) -- 10 Years Later
Recent Comments
0 | Leave a Comment
Browse Our Archives
get the latest from
Entertainment
Sign up for our newsletter
POPULAR AT PATHEOS Entertainment
1