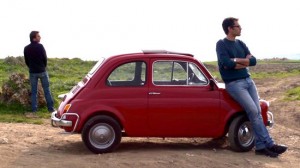 Italy Love It or Leave It is a modest film, almost modest enough to work. While its premise is promising, the ultimate execution is a bit too glum. It needs either the self-effacing whimsy of a Bill Bryson travelogue or the aggressive bite of a Michael Moore indictment of political policy. Both would be better, like if the debate between Luca and Gustav about whether or not to emigrate from Italy were an actual debate and not merely an excuse for a series of road trip vignettes. But even without any real give and take, the film would still work if the individual segments imposed a point of view on the material or credibly drew a link between what they found and their ultimate decision.

The premise of the film, that Gustav wants to leave and Luca has six months to convince him to stay, is somewhat undercut by the road trip itself. At each turn the pair encounters problems–ecological, social,  political–confronting Italy. Italy has the lowest rate of male graduation from higher education, environmental deterioration spurred by Mafia control of waste management is up, fascism is on the rise. To all these Luca responds that Berlin is cold in winter and he will miss riding his bike.

Aside from the deck stacking, there is the question of how many of the social problems described are intrinsic to Italy and how much of the malaise felt and conflicts portrayed is generational.

All that said, the film is more hit-and-miss rather than just miss. There are memorable bits, such as an interview with a man in Sicily who refuses to pay protection money, a mayor who (gasp!) enforces the law, or a souvenir shop owner who has a special permit to sell a banned Mussolini tract. There are plenty of interesting stories to tell about Italy, I just wish some of them had been developed a bit more. 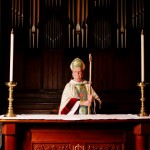 April 13, 2012 Love Free or Die (Alston, 2012)
Recent Comments
0 | Leave a Comment
Browse Our Archives
get the latest from
Entertainment
Sign up for our newsletter
POPULAR AT PATHEOS Entertainment
1