Did you know that Peter Weir has directed one feature length movie in the last ten years?

The Australian auteur, who has been nominated for Best Director four times (and Best Screenplay once) but never won, didn’t exactly work at a John Ford pace even in his most productive decades. He gave us five films in the 1980s: Gallipoli, The Year of Living Dangerously, Witness, The Mosquito Coast, and Dead Poets Society. The pace slowed in the 1990s, but we still got three films: Green Card, Fearless, and The Truman Show. (Is The Truman Show really five years older than Master and Commander? Strange how time plays tricks with your memory.) The gap between The Truman Show and Master and Commander was half a decade. In retrospect the writing appears to be on the wall, yet only in sports does the span in between “he’s at the top of the world” and “whatever happened to that guy?” feel as equivalently brief. At least in sports you (usually) get some sort of formal retirement announcement. Sometimes you get a farewell tour.

Is Weir retired? In this interview in 2011 he said:

I don’t think directors ever retire. They just fade away. I’ve often thought of directors as volcanoes — there’s active and there’s extinct and there’s dormant. A dormant volcano is liable to go off, and I think that’s where I lie. I’m certainly not extinct. But it doesn’t bother me in one way.

Ten years changes a lot. The cliche states that you don’t know what you’ve got until it’s gone. Certainly one context in revisiting Master and Commander: The Far Side of the World ten years later is that it now feels like a culmination. It may not be Weir’s last film, but judging by responses to The Way Back it was the last Weir film that many people actually watched.  Master and Commander was nominated for Best Picture in 2003, losing out to The Lord of the Rings: The Return of the King. Perhaps that snapshot is a microcosm of the shift in Hollywood towards franchise films, away from varied, original, auteur driven content.

In retrospect the film also helps mark a transition for star Russell Crowe. The New Zealand born superstar had garnered acting nominations in three of the preceding four years, taking home the golden statue for Gladiator. Master and Commander was his first film after A Beautiful Mind, which remains the last film for which Crowe received a nomination. I haven’t watched the Academy Awards in years, but in hindsight they can signal shifts in careers and in what the industry is championing.

Enough about the participants, however. What about the film?

In 2003, I was still grading films (chutzpah, I know), and I awarded Master and Commander a “B.” In my review at Viewpoint (now defunct), I wrote:

I still haven’t figured out what Master and Commander (I typed the full title once, I’m not going to do it again) is trying to saying about evolution. On the one hand, the HMS Surprise sails all around the Galapagos Islands, and ship’s surgeon Stephen Maturin (Paul Bettany, nicely complementing Crowe) carefully catalogs all of Darwin’s favorite proofs of the origin of the species. He even has a rather cryptic conversation with the young lads on the ship about whether God changes species or whether they change themselves. Captain Aubrey isn’t much interested in looking at flightless birds (“they aren’t going anywhere,” he quips), but he does study the miniature model of the French ship he is chasing that has been brought to him by his men. He is seeing the evolution of the fighting ship; the French ship is faster due to an innovative new design that will soon make Aubrey extinct.

Well, not exactly. Aubrey can beat the bigger ship despite having none of the advantages of nature because he has a brain, and the brain can innovate much faster than nature can.

I digress, however. Then again, so does Master and Commander. Culled from incidents in not one but two of Patrick O’Brian’s novels, the screenplay becomes a pastiche of incidents and themes rather than a unified plot. Many of those incidents are cliches: the captain must sacrifice one man for the safety of everyone, a crew member shoots an albatross and brings on bad luck, a ship’s captain has to perform surgery on himself, a lieutenant tries to learn the differences and similarities between respect and fear. They are executed well; and Crowe and Bettany are superb actors who have a natural chemistry together that infuses the film with the intimate familiarity necessary to convincingly pass for the portrayal of a self-contained world for months on end. The film’s authenticity may help raise it above the mundane, but it isn’t enough to make it great. For that we need a great story, and we only have an average one.

Perhaps one of the most interesting scenes, from a Christian standpoint, comes after the battle between the French and British, when Aubrey commits the dead to the sea by reciting the Lord’s Prayer. He says it straight, as anyone in that position would and must, seeing no ironic tension between his job and the words “Thy will be done.” It is not a political scene, nor a particularly pointed one about religion. The Christianity is noted but not really commented on, an authenticating detail in what amounts to a glossy documentary. Don’t get me wrong; I enjoyed this film. In this day when the big budget, studio picture is evolving into a faster, sleeker, more explosive version of itself, perhaps the HMS Surprise can serve as a metaphor for the movie itself by reminding us that a film doesn’t have to set world records to get the job done.

That “B” grade looks stingy in retrospect, especially given some of the films I had rated above it: Kill Bill: Vol. 1; Thirteen; The Lord of the Rings: The Return of the King; Mystic River. If I were constructing a list today, I’m not sure I would place any of those above Master and Commander. Yet I am reluctant to call the film the “best” film of 2003, even by default. I originally chose Pirates of the Caribbean, arguing that in the absence of a truly “great” film, the most entertaining film got my vote. I could always dodge the question by pointing out that in 2003 I had not yet discovered the films of Jean-Pierre and Luc Dardenne and say that in retrospect The Son is best film of the year. But this column is supposed to give me insight into how my own tastes, critical faculties, and judgment have changed, not just provide an opportunity for a “do over.” I find myself wrestling with my contradictory impulses. I clearly liked and esteemed the film more than others from 2003 that I revisited. Peter Weir is an esteemed filmmaker, and the film has a good critical reputation and pedigree. So whence this reluctance to honor the film too highly? Why can’t I move the needle from “good” to “great”?

Two things jump out at me from the previous comments. The first is the emphasis on evolution. That seems puzzling to me now. Yes Bettany’s character is a naturalist and yes part of the film takes place in the Galapagos Islands, made famous by Charles Darwin’s work. It’s hard for me to believe I care that much less about pro-evolution messages in movies than I did ten years ago. Did I care that much ten years ago, or was I still feeling the need to intentionally focus on what I thought of as “Christian” themes? Today, I’m more comfortable with the “inconspicuously” Christian label. And is this really a pro-evolution film anyway? Thematically, yes, the film is about adaptability. Aubrey does garner insights from one of his surgeon’s natural discoveries and uses it to adapt his military tactics and survive against a predator. There is also some discussion about the newer design of his foe’s ship. But so what? Is the use of camouflage evidence of the origin of the species, or is it just analogous to the survival of the fittest?

The other part of my 2003 review that stands out is the final paragraph. I’m pleased that even as early as 2003 I was noticing a fundamental shift in action or adventure movies. “Faster” and “more explosive” are just right, though the contemporary big-budget film is not exactly “sleeker.” (How many summer action flicks from 2013 clocked in at over the two hour mark?) That word, though, hints at my biggest change in esteeming the film. I suspect the very things that made me dock it slightly ten years ago–pace and length–are  what makes it feel like a rewarding throw back today. Because that extra time goes into world building rather than longer action pieces.

Indeed for the first half of my revisit, I was struck by the relative unimportance of the plot. The best scenes are the ones that establish Aubrey’s character and give us glimpses into life on the ship. When a lookout sounds the alarm and the captain can’t see the ship, he nevertheless praises his soldier for doing the right thing. When we think Aubrey is the beloved leader, we show him exercise harsh discipline, whipping a sailor for failing to salute an officer. In these scenes we don’t merely advance the plot, we get a sense of the world the characters inhabit. And that is rare. I venture to say there is more world building, creation of a specific context in which an alien (to the viewer) setting is drawn in great detail, than there is in Ender’s Game, Pacific Rim, Thor, and Iron Man put together.

That doesn’t quite answer the question, though, of whether Master and Commander is a superior movie or just a remnant of a time where there wasn’t quite so much lazy spectacle. It’s an easy film to praise but a harder one to really champion. That said, it’s one of the few films from 2003 that I could at least imagine watching again in the subsequent ten years, whether as part of a Peter Weir retrospective or just for pleasure.

And here’s hoping that the dormant volcano goes off just one more time before it becomes extinct. 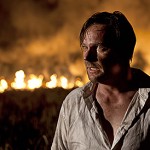 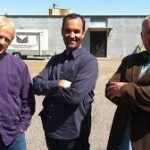 November 17, 2013 Church Hoppers
Recent Comments
0 | Leave a Comment
"Excellent points. I thought this was a really good movie, and the style is subtle ..."
movieman0283 My Best Picture Choice: Spotlight
"True story: I went to see this film by accident when it was in theaters ..."
movieman0283 The Devil Wears Prada (Frankel, 2006)
"I just scrolled through the film to get some clips for a video (I'm illustrating ..."
movieman0283 Salò (Pasolini, 1975)
"Well reasoned. I agree with you about Spotlight's technique - I just rewatched this and ..."
Andrew Spitznas My Best Picture Choice: Spotlight
Browse Our Archives
get the latest from
Entertainment
Sign up for our newsletter
POPULAR AT PATHEOS Entertainment
1