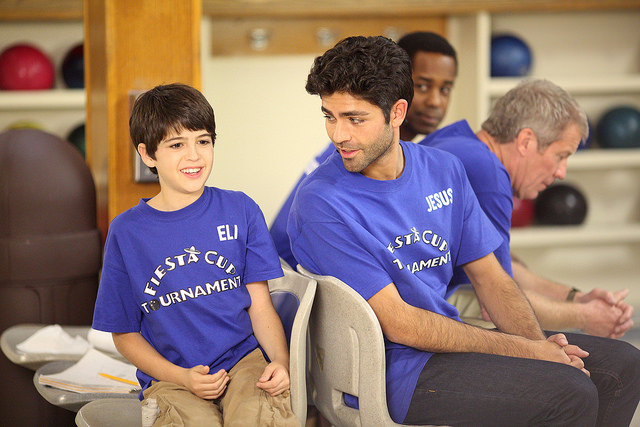 I imagine myself in twenty years, if I am still alive, playing You Don’t Know Jack, if the game still exists. The DisOrDat challenge: Adrian Grenier movies or Vincent Chase movies? Medellin, easy, Aquaman, easy. Shot in the Dark…um….Sex, Death and Bowling…..

If the point of the joke is that the personable thirtysomethingish star has inexplicably never quite attained the mega-success of his Entourage alter ego, the counter to the punchline is that Grenier almost always charms in charming movies.

In Sex, Death and Bowling, the star takes a supporting role. The story actually revolves around eleven year-old Eli McAllister (Joshua Rush). Eli is wrestling with some heavy spiritual questions since his father is facing his own mortality. Eli deals with the impending death in the family by debating theology with any religious figure he can find and committing to winning the bowling tournament that is the last thread holding his unraveling family together. Grenier is Josh’s gay uncle, Sean, who is ostracized from the adult members of the McAllister family yet manages to bond with and comfort his precocious nephew.

For Christian viewers, the most interesting aspect of the film may be its portrayal of Josh’s independent religious Christian education. On television both The Good Wife and The Americans feature Atheist parents befuddled by their child’s religious convictions.  These shows sometimes take on a patronizing tone towards the religious; by their very structure they suggest that faith is childish and its rejection  mark of one’s maturity. Sex, Death and Bowling flips that script tone slightly; Josh is more articulate in his defenses of spirituality than even those from whom he seeks assurance. When Uncle Sean tells Eli, “I don’t really believe in the afterlife…or God,” the nephew opines that “the First Law of Thermodynamics”  is that energy is never obliterated, it only changes forms.

Okay, so that’s maybe a bit New Ageish for some tastes, but what is sweet about the relationship between Sean and Eli is that the uncle may not believe but he acts in a loving, sacrificial way for his loved one who does. When Eli needs Sean to fill in for his father, well…let’s just say that sometimes true love is as much about humoring someone in his quest no matter how futile you think it is.

Sex, Death and Bowling (★★½) ends, as most sports films do, with the “big game.” The outcome doesn’t solve anyone’s problems, but the process does bring the hurting souls together. 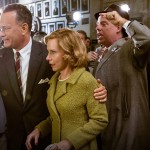 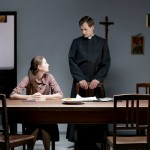 November 1, 2015 Arts & Faith Ecumenical Jury Nominee -- Stations of the Cross (Brüggemann, 2015)
Recent Comments
0 | Leave a Comment
Browse Our Archives
get the latest from
Entertainment
Sign up for our newsletter
POPULAR AT PATHEOS Entertainment
1