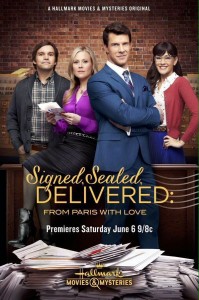 This week marks the premiere of a film adapted from a successful cable television series. No, it’s not Entourage, it’s Signed Sealed, Delivered: From Paris With Love, airing June 6 on Hallmark Movies & Mysteries.

The series follows a group of postal detectives in Denver charged with investigating the contents of dead (undeliverable) letters and packages.  Oliver (Eric Mabius) is the head of the unit; he is erudite, a stickler for details, handsome (of course), and emotionally reticent (double of course). Shane (Kristin Booth) is the newest member of the team. Her official job is that of “tech support” for the Internet illiterate Oliver, but really she is more of a right hand woman. The other two members are Norman (Geoff Gustafson) and Rita (Crystal Lowe), whose jobs are…..most probably apparent to those who watch the show regularly.

Because this is serial television, sexual tension and office crushes play a large role. But because it’s a Hallmark/Williamson production, those conventional conflicts are played out in a chaste, faith-friendly context. Shane clearly has feelings for Oliver, who, in consequence of his wife deserting him, is both unattached and unavailable. Norman likes Rita but apparently fears he is not as dashing as the local television celebrity who threatens to “sweep her off her feet.”

The main story line focuses on the team trying to track down Oliver’s wife since a letter he sent to her (apparently in one of the previous episodes) coincidentally ends up in the dead letter office. The B-story is about divorce papers from a French restaurant owner that never got delivered to his wife. Because the film starts with the B-story and uses a lot of flashbacks (how Oliver met his wife, how he and Shane got locked in a bank vault) the first half hour is very choppy and confusing to those (like me) who don’t know the series. But once we get all the characters straight, the story is simple enough to follow even if you’ve never seen the show before.

There is something a bit artificial about constructing scenarios where resurrected letters or packages end up having a dramatic impact worthy of a sermon lesson, but at least the sermonizing is handled in a very understated manner. By way of comparison, other faith-friendly shows (The Secret Life of An American Teenager, Seventh Heaven) come across as a more explicit and blunt. In the scene where Shane and Oliver confront the restaraunt owner, Shane says she has learned from Oliver that “when we have faith […] things end up working together for good.”

Some may ask, “Faith in what?” and others may complain that this paraphrase fundamentally alters its source. (Romans 8:28 says things work for good for those who “love the Lord.”) Still, I suspect most faith viewers will find the toning-down of religious talk benign and be happy for the expression of values they can identify with.

From Paris With Love is not going to make Signed, Sealed, Delivered the next breakout show, but on a weekend where the choices at the multiplex are pretty crass (Entourage, Spy), it’s a serviceable diversion for the audience segment that eschews R-rated films altogether. 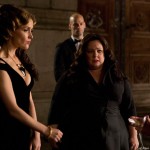 June 4, 2015 Spy (Feig, 2015)
Recent Comments
0 | Leave a Comment
"Excellent points. I thought this was a really good movie, and the style is subtle ..."
movieman0283 My Best Picture Choice: Spotlight
"True story: I went to see this film by accident when it was in theaters ..."
movieman0283 The Devil Wears Prada (Frankel, 2006)
"I just scrolled through the film to get some clips for a video (I'm illustrating ..."
movieman0283 Salò (Pasolini, 1975)
"Well reasoned. I agree with you about Spotlight's technique - I just rewatched this and ..."
Andrew Spitznas My Best Picture Choice: Spotlight
Browse Our Archives
get the latest from
Entertainment
Sign up for our newsletter
POPULAR AT PATHEOS Entertainment
1