In the last several years, there has been a debate (I would not say a robust debate) about whether or not fathers matter. The discussion seems to center around whether a household run by a single mother or grandparent or other alternative fatherless households can provide the same (or superior) child-rearing environment. The answer, it seems, is a foregone conclusion. “Of course”, it is answered. “How could you suggest otherwise?”, it is asked. And then the litany of abuses or errors that fathers have brought to their children’s lives is listed soon followed by the not subtle insinuation that it is bigotry to suggest otherwise. Thus, it would seem, endeth the debate.

Now, on this Father’s Day, I only want to offer three insights regarding this debate. First, there are plenty of extraordinary families that don’t have a father involved. Second, there are a number of fathers who have done terrible things to their children and are rightfully considered abominable. And third (and perhaps most importantly), quite simply, fathers matter.

I will not offer statistics. I will not quote sociological data (of itself, often dubious). I will offer two examples of fatherhood that have made an undeniable impression on me: my father and Randolph Churchill (the father of British Prime Minister Winston S. Churchill).

Randolph Churchill was an eminent Conservative British Member of Parliament. Married to an American socialite, Jennie Jerome, he and his wife would have two boys, Winston and Jack. But life was busy for Randolph and Jennie who proved to be two attractive figures in great demand. When Randolph was not hatching new political strategies, traveling abroad or raising money, he and his wife would hobnob with all the glittering luminaries of English high society. His hard work, intelligence and connection to the aristocracy (his father was the Duke of Marlborough) would help him skyrocket to the premier political post of Chancellor of the Exchequer for the Conservative party. Meanwhile, his wife was quite connected to influential elements of royalty, aristocracy and the media. It is arguable that Randolph and Jennie were a “power couple” par excellence. In what other way could Randolph, specifically, excel? Perhaps we should ask Winston.
Winston Churchill was the oldest of the Churchill boys. Raised largely by his nursemaid, Mrs. Everest, he pined for the presence of his mother and father. While his mother provided money and opportunity for Winston as he grew, she provided little of her presence. As Winston would recall about his beautiful mother.

“She shone for me like the Evening Star. I loved her dearly – but at a distance.”

But it was Winston’s father who haunted him. Sent off to boarding school at a young age, he looked at his father from afar as a political icon and hero. Time and again, Winston found himself desperate for his father’s attentions and repeatedly rebuffed. Letters penned from the hand of a broken-hearted boy went effectively unanswered by his father. One in particular was written when a barely teenage Winston found that his father had traveled to Brighton (where Winston was attending boarding school) on business and didn’t so much as contact him when in town.

“I cannot think why you did not come to see me when in Brighton. I was disappointed but I suppose you were too busy to come.”

His father was unmoved. Little attention was given to Winston and even less encouragement. While Winston could have frustrating habits of impulsiveness, arrogance and a lack of self-discipline, his private words indicate that he would move heaven and earth if only to get a little of his father’s attention, much less affection or guidance. If his father would offer anything, it would be criticism,

“If you cannot prevent yourself leading the idle, useless & unprofitable life you have had during your schooldays, you will become a mere social wastrel, & you will degenerate into a shabby, unhappy, and futile existence…”

“[Winston] is a potential washout.”

Randolph’s thinly veiled disdain and disinterest in his firstborn son did not go unnoticed by extended family. Winston’s cousin, later in life, would observe,

But far from being despondent, Winston Churchill would idolize his father even more. Like his father, Winston pursued the field of politics. He picked up his father’s pet issues and served his Conservative party. After his father’s ignominious fall from political greatness and death at the young age of forty-five, Winston would write a hagiographic two-volume rehabilitation of him. And his firstborn son would be named – what else – Randolph. In one poignant and bittersweet exchange, a middle-aged Winston on vacation with his son mused,

“I have talked to you more in this holiday than my father talked to me in his whole life.”

“If I ever began to show the slightest idea of comradeship, he was immediately offended.”

At the age of sixty-five, Winston Churchill would be elected Prime Minister of Great Britain. His clear-eyed vision, dogged determination and unparalleled rhetoric defied Adolf Hitler, galvanized an unlikely alliance, and paved a way to win the greatest war in the history of the world. He would be lauded as an international hero and afforded accolades such as Nobel prizes, Knighthood and honorary American citizenship. And yet, when asked by his daughter what historical figure he would most like to dine with (she imagined he would choose Caesar, Napoleon, or the original Duke of Marlborough), he answered instantly and without debate,

Perhaps, most haunting for Winston Churchill was one of his last published works, “The Dream”. Released one year after his death, this fictitious tale finds Winston painting in his studio where he encounters the shade of his father seated in a chair. In short order, the curious apparition engages Winston in a conversation. What’s become of the world since my death in 1895?, Winston is asked. Regaling his father with the Churchillian sweep of history from the death of Victoria to the rise of the Bolsheviks, from the crash of the market to the advent of the Nazis, from World War I to World War II, from the atomic bomb to the beginnings of Cold War, Randolph’s ghost finds himself amazed. And yet, Winston’s father is unaware of his son’s heroic role in the greatest and recently concluded cataclysm. Just as he is about to disappear, Winston’s father shakes his head and wonders what would have become of the world if only Winston had gone into politics – perhaps he could have made a difference. Before Winston can interrupt his father and provide the greatest, “Hey Dad, look at me!” story of his life…before he can tell his father that, at last, “I am the hero, Dad. Aren’t you proud of me?”, his father disappears. And Winston finds himself alone and forlorn. He is bitterly cheated of his father’s recognition, affection, appreciation one last time.

But now let me briefly tell you about my father. His name is Roger. Raised in an alcoholic household, he, his brothers and sister knew what it was like to play in a football game without a parent there, to pick up an inebriated father on the front stoop who cursed them as they carried him in the house, to achieve awards and honors in their early life and to support each other instead of look for it in their father. My grandfather, Cliff, ultimately sobered and became a proud and loving father and grandfather. It is a redemptive tale in and of itself. But the childhood years for my father and his siblings hurt. In spite of their rough childhood, my father and his brothers went on to become incredibly successful in the field of education (specifically educational administration) and their sister was a woman of incredible candor and deep intelligence.

But my father – the product of an alcoholic upbringing – never missed one of my football games, baseball games, plays, choir concerts, solos, speeches or history presentations. Incredibly busy, he never flaunted what he did for me. He simply showed up, told me he loved me and how proud he was of me. He taught me how to tackle in my front yard with “reckless abandon”. He pitched countless baseballs to me and took innumerable line drives to the chest and belly. I can still see him in his half broken green and white lawn chair at the far end of the first baseline and hear his words, “Watch the ball.” like it was yesterday. He proofread my papers, listened to my speeches, and puzzled over difficult calculus problems. My dad taught me to pray, read me stories from the Bible and modeled a steady devotion not only to attending church, but giving the church time and treasure. He taught me how to engage in conversation, look a person in the eye and offer a firm handshake. He mentored me about character, virtue and truth. When I have gone through dark times in my life, he not only listens, but is one of the few people – ever – to give me consistently good advice. And, do you know what? I have never, ever, ever had the impression that my dad thought I was wasting his time (even when I knew he didn’t have much time to give). This is my dad. My friend, my counselor, my mentor, my hero.

Now, on this Father’s Day, let us return to the original debate about whether or not fathers matter. And let me simply say this: Thank you for offering me statistics. I appreciate you providing expert psychological and sociological opinion. It is kind that you thoughtfully construct a point-by-point analysis and share this with me on this issue of great importance.

But I don’t need it.

I already know the answer. How do I know?

Because a father mattered to Winston Churchill.

But more profoundly, because my father mattered to me.

June 19, 2014 G.K. Chesterton, the Diabolist & "The Most Terrible Thing"
Recent Comments
0 | Leave a Comment
Browse Our Archives
Related posts from A Catholic Thinker 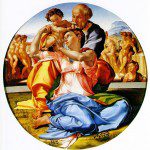 Catholic
Who Writes Letters to Families? The Catholic Church,...
A Catholic Thinker