Behold the Pierced One: Spending Holy Week with Benedict XVI 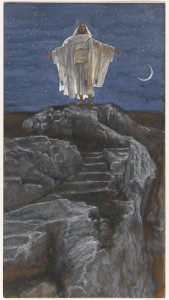 “Easter is concerned with something unimaginable.”

I just returned from vacation. And it was terrific. The sunny climes of gulf coast Florida afforded an abundance of time to explore Busch Gardens (birds land on your head!), discover the Florida aquarium (I’ve never seen a bigger grouper), be dazzled by mind-bending art at the Dali Museum (pose with a gigantic Dali moustache!) and swim with my two daughters (both of whom I threw, splashed and chased to my utter delight and exhaustion). It was truly rejuvenating.

But it was also Holy Week. And it got me thinking.

As is my usual habit, I packed way to many books for the trip. My carry-on routinely rivals our checked baggage in weight. And my wife has given up on talking sense into me. So here is what I brought: 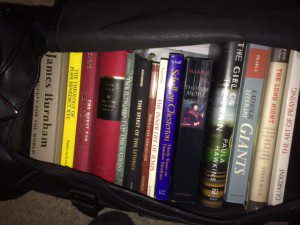 As you can see, my wife put one book in the bag (I will let you guess which one). While on the trip I had little time to truly delve into much reading, but one book I did sink my teeth into absolutely entranced me. It was Joseph Cardinal Ratzinger’s 1984 book Behold the Pierced One. I have been (and continue to be) a great admirer of Joseph Cardinal Ratzinger/Pope Benedict XVI. After originally being aloof to his work, I soon found his writing so wise, spirit-filled and deeply personal that I would argue that, to paraphrase a famous quote from G.K. Chesterton, Benedict has not been tried and found wanting, he has been found difficult and left untried.

Behold the Pierced One leapt off of my bookshelf at me as an appropriate book to read during Holy Week. The book, in fact, is a deeply theological consideration while simultaneously being an utterly approachable one. One chapter, in particular, made quite an impression on me: Taking Bearings in Christology. While it would seem easy to be intimidated by the academic title of this chapter, I soon found that by simply wading into the deep waters of Ratzinger I felt a steady yet sensitive hand guiding me from one rock of truth after another.

What did I learn?

Christ prayed. While this seems utterly obvious, Ratzinger points out the absolute centrality of prayer to the life of Christ and the Church. Before he called The Twelve, Christ was deep in prayer. Peter’s Confession that Jesus was the Christ, the Son of the Living God was born of the Spirit and Peter’s increasingly granted access to the hiddenness of Christ’s prayer. Ratzinger would say, “The Christian confession is not a neutral proposition; it is prayer, only yielding its meaning within prayer.” By calling God the familiar“Abba”, Jesus brought prayer to a hitherto unknown approachability – a loving conversation with God the Father. Jesus suffered and died, but uttered prayer in his most agonizing moments anticipating and enduring man’s barbarity. As Ratzinger would say, “He fashioned his death into an act of prayer, an act of worship.” Ratzinger is keen to impart that to understand Christ and to understand the Triune God, we must pray. We are told, “The fundamental act of religion is prayer, which in the Christian religion acquires a very specific character: it is the act of self-surrender by which we enter the Body of Christ. Thus it is an act of love…The person who prays begins to see.”

Christ gave inextinguishable hope. We are dominated by death. It haunts us as a fearsome void, a chasm that opens itself in inky blackness and ravenously consumes each of us. And yet we have a God would not let this be? We have a God who would stoop to take on the flesh of mortality, suffer on our behalf, return from the dead and offer this loving shake from our slumber (as so well phrased by the Apostle Paul) “Awake, O sleeper, and arise from the dead and Christ shall give you light. I have not created you to be in a prison forever. I did not make you for the dungeon.” Ratzinger continues so poetically, “Death is now no longer a place of no return; its doors lie open. Christ, in the aura of his wounded love, stands in the doorway, addressing the still somnolent Adam and takes him by the hand to lead him forth.” Have faith, we are told. “Easter is concerned with something unimaginable.”

As my week of vacation neared its end and I reflected on my time lazing through various tourist attractions, eating too much and goofing off with my wife and daughters, I was humbled when I reconsidered the true depths and heights of Holy Week. Over a matter of days nearly two thousand years ago, a ragged band of disciples found themselves dizzyingly experiencing the most significant spiritual moments in the history of the world. The Triumphal Entry into Jerusalem, the Last Supper, the Agony in the Garden, the Betrayal by Judas, the Betrayal by Peter, the Trial, the Passion, the Crucifixion, the ensuing darkness and the Glorious Resurrection. How did these disciples hold it together? How did they behold the magnitude of the eternal events and truths that overwhelmed them, that left them reeling, that destroyed them and then dazzled them? How? By fervently doing what their Christ taught them. By praying and hoping.

Joseph Cardinal Ratzinger crystallized the miracle of Easter that too often can lose its luster thanks to wan familiarity (or, sadly in this day and age, unfamiliarity). His words quite simply jarred me,

“Only since Easter can we really utter the first article of faith; only on the basis of Easter is this profession rich and full of consolation: I believe in God, the Father Almighty. For it is only from the Lamb that we know that God is really Father, really Almighty. No one who has grasped that can every be utterly despondent and despairing again. No one who has grasped that will ever succumb to the temptation to side with those who kill the Lamb. No one who has understood this will know ultimate fear, even if he gets into the situation of the Lamb. For there he is in the safest possible place.”

Behold the Pierced One. Really, really behold him. In prayer. In humility. In receptivity to his will in my life. He is truly a wonder to behold.

The Resurrection by El Greco – courtesy of WikiArt 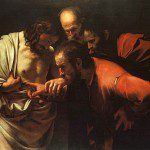 April 9, 2015 Rediscovering The God I Had Forgotten About
Recent Comments
0 | Leave a Comment
Browse Our Archives
get the latest from
Catholic
Sign up for our newsletter
POPULAR AT PATHEOS Catholic
1