Yes, It’s Political, and If You’re Voting For Trump? I’m Judging You.

Truly this years election is a fearful one. Very few people I know aren’t nervous about it, and those who aren’t, are largely privileged Republican voters who feel assured of yet another victory. Recently when Jason Mankey of Raise the Horns here on Patheos wrote Voting Out Trump Is a Part of My Paganism, the backlash was swift and red, and never have I been more acutely aware of the division in our nation as I was wading through those comments. Comments ranged from “There are no witch-hunters like woke witch-hunters and no bigots like ‘antiracist/antifacist’ bigots” to “I’m a WITCH & a Pagan and am a Republican! Trump does not harm any of my beliefs. He has not interest to do that. STOP listening to the lying media!” It was shocking to see the level of misinformation that abounded, and the vast numbers of commenters decrying witchcraft as political.

I’ll save wading into that by simply sharing this: Witchcraft Has Always Been Political and follow it up by saying that voting out Trump? It’s part of my paganism too. I live in Appalachian North Carolina, and though there are some who’ve stated that living here as a witch hasn’t meant that they were automatically hated, that has not been my experience. Whenever I see someone mention how accepting everyone is of them, it always seems to be a transplant, or someone with some inherent privilege, or someone from a major city. Of course the people of the South are nice to you, you’re a weird stranger, and being polite to outsiders is cultural.

But it’s different when you’re “from here.”

Here in Appalachia I find myself, almost daily, being judged. It’s as though by having the blood of the mountains running through your veins, or red clay in your lungs, you are destined to be a standard bearer for the ideals of your community. To eschew that, to lay down your red bandana, is an undeniably political act. To replace it with epithets like “witch,” “gay,” “estranged,” “liberal,” or even “divorced?” Well sometimes it’s more than your community will bear.

Every day I get judged.

In a rural town with a population hovering at around 2000, and coming from a family that is well known and well loved, I am recognized. I dodge confrontations everywhere I go. I am stopped in the grocery store and yelled at for not having on a bra by a woman I once attended church with, as she covers her grandsons eyes with her hands. I’m pulled over by a police officer in town and asked to explain my “protected by witchcraft” bumper sticker. Postal employees curl up their noses as I come in to mail more packages of witchcraft and ask for Halloween stamps. The woman behind the counter as I pay a utility bill, chastises me for talking about abuse perpetrated by my parents. ‘That’s family business’ she’ll explain, God has forgiven them, and so should I. She asks when I’ll call them, and advises with a wagging finger that I make amends “while I can.” Whispers by the person in line behind me at the department store about my divorce. Sneers at my Pagan or Witchcraft tee shirts. Always a comment about how I’ve desecrated Gods temple with a tattoo. I am a pariah in my own town, and it is truly lonely at times.

But I’m Judging Too

While I’m walking lonely through my days? I see the yards with those Trump signs. The banner waving across the street from my home where when I was a child a different flag flew. When I encounter one of my parents and they talk about how their vote is for the economy? I remember the bumper sticker on their car, and my fathers stories where he laughingly spoke of selling ruined produce at higher prices to the black community in the 50’s. When I get a friend request from someone in the Pagan community, I’ll remember when they talked about wishing they could shoot border crossers. When I’m asked if I’ll come on a podcast as a guest, I’ll remember when the host shared misogynistic memes online and explained to me that they were only kidding. When you invite me to your online group, I’ll remember the time you explained in misleading feminist terms how certain people didn’t belong in Wicca. And I’ll remember that your vote wasn’t for Trump at all, that it was for a world where all of that is okay. That it was a vote for lack of accountability. That it was a vote for cruelty and selfishness.

It will be a political act tomorrow when I go back to the local democratic headquarters and pick up another “Biden/Harris” street sign and place it by my mailbox – knowing it will be stolen during the night. It will be political when I light candles, praying that people make it safely to and from the polls in this pandemic. It will be political when, on election day no matter the result, tears flow from my eyes. And if you vote for Trump? Remember when I don’t invite you to my home or my circle; or when I decline your invitations, or don’t return your calls, or accept your friend requests – that that’s political too. 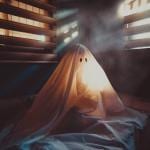 October 28, 2020 Death and the Solitary Hallows
Browse Our Archives
Related posts from A Crow and The Dead