The Dead & The Goddess Hekate

In modern Pagan literature Hekate’s association with  the restless dead is often emphasized, and with the season of Samhain (All Hallow’s; Halloween) upon us, I was inspired to share this extract from my 2017 book Circle for Hekate, Volume I (History & Mythology) with readers here – I hope that it will inspire you to explore this fascinating subject in more depth.

“But either thou art frightened of a spectre beheld in sleep and hast joined the revel-rout of nether Hekate.”[1]

Tibetan Buddhism teaches that “Death is certain; and the time of death is uncertain”, and proposes that the only thing that can help us as individuals at the time of our death is our spiritual and mental development. While this is not at all directly linked to the goddess Hekate, it is a wise approach which initiates of the Mysteries would have understood. All of us will face death sooner or later, and as such it is not surprising that customs and practices associated with the dead and dying can be found in all the regions and cultures in which Hekate’s cult had a foothold.

“No figure is more closely associated with the returning souls of the dead than Hecate. Her role as their leader was well enough established by the fifth century for the tragedians to allude to it without further explanation.” [2]

Considering her long history of association with the dead, Hekate’s role with the dead is naturally multifaceted. She is called upon in necromantic rites in which efforts are made to interact with the dead, as she was believed to control the domain(s) in which those who had not fully passed into the Underworld dwelled. She was also said to rule over those who died untimely deaths, which included those who died through murder, suicide or another violent act. Described as “raging among the souls of the dead” in a fourth-century Hippocratic treatise on sacred diseases.[3] The spirits of these people were thought to do Hekate’s bidding with evidence showing that some feared nightly attacks by Hekate’s band of ghosts. They were also believed to cause various mental diseases, which were possibly sent to torment those who misbehaved in some way or another, until such time they rectified their action.

The understanding held about death by the priesthoods, devotees and initiates of Hekate’s mysteries in the past provides thought-provoking insights on beliefs and customs associated with death. An inscription found on a gravestone from the town of Mesembria, Thrace dated to around the second-century CE tells the story of a devotee of the goddess who died:

“I, the goddess Hecate, lie here, as you see. Earlier I was mortal, now, as a goddess, I am immortal and young forever. I, Julia, daughter of the generous Nikias. My native city was Mesembria – the name comes from Melsa and “bria.” The stone commemorates the years I lived: in all, three times five, twice over twenty, and, in addition, ten and five.” [4]

It is one of the numerous examples of funeral inscriptions expressing a belief in apotheosis, a process through which the deceased becomes one with the deity. In this case Julia, who was presumably an initiate of the Mysteries of Hekate, becomes the goddess Hekate upon her death. Similar cases exist mentioning the goddess Gaia, the Titan Earth goddess, suggesting that upon death the body does not die, but instead transforms and becomes assimilated into the living body of Gaia[5]. It also brings to mind the transformation of Iphigeneia, Aphaia and Queen Hekabe.

With such an understanding there is no death, and there is nothing to fear, as death is understood as a transformation rather than an ending. This may account for the different awareness of death held by initiates of the Mysteries. To them the process of initiation provided a self-transformation from which initiates emerged with a different understanding of death, armed with knowledge on how to transcend death. Additionally, based on inscriptions on some of the Orphic Gold Tablets, initiates may additionally have believed that the knowledge they gained through initiation would provide them with specific privileges after death.

Hekate’s association with childbirth brought her into the lives of women at the very liminal time of labour. Not only is childbirth painful, but it is also a dangerous time for both mother and child. Taking into consideration Hekate’s role towards the dead, Hekate’s role as child-nurse can then be seen to take on additional layers of meaning, where she is seen responsible for helping during birth, and taking into her care those who did not make it through the process.

The above extract is from Circle for Hekate, Volume I – History & Mythology, by Sorita d’Este, 2017. 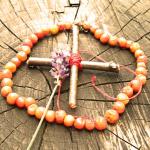 November 4, 2018 The Cyberbully in Paganism
Recent Comments
0 | Leave a Comment
"This is a good article and book. Blessed be! :)"
Viktor_Aradia The Morrigan – Faerie Queen
"I'm sure Freemasonry also has a lot to learn from Wicca (Witchcraft) too. :)"
Viktor_Aradia Payam Nabarz – Children of Earth ..."
"Thank you! His work is very interesting, so do!"
Sorita d'Este Payam Nabarz – Children of Earth ..."
"Thank you Merit - if you remember let me know. There are variations, of course, ..."
Sorita d'Este Is She the Crone? Hekate’s Profanation?
Browse Our Archives
get the latest from
Adamantine Muse
Sign up for our newsletter
POPULAR AT PATHEOS Pagan
1