Adrian: Congratulations, Nancy, on your award. I suspect you feel that it reflects also on your mentors who taught you. Who would you say has had the most influence on you?

Nancy: After spending several years as an agnostic, I converted back to the Christianity of my childhood through the work of Francis Schaeffer at L’Abri in Switzerland, so I will always be grateful for that. Schaeffer also introduced me to a form of Christianity that engaged with the intellectual and cultural world of the day, which was something I had never witnessed before. As a result, right from the beginning of my Christian life, I had an understanding that Christianity is meant to be an entire worldview–that it gives the resources to be involved in politics, science, and the arts, so that we don’t need to avoid or be intimidated by secular culture.

Adrian: What would you say was the main message of the book for those of us who haven’t yet had a chance to finish reading it? To be honest, I got very excited about this book a few months back and very much enjoyed the first few chapters but am sad to admit that I haven’t been able to get back to it recently. I promise I will read it eventually!

Nancy: I wrote Total Truth to help Christians develop a worldview perspective. Of course, I had the same goal earlier when I authored my chapters in How Now Shall We Live?, but after finishing that project I left my position as founding editor of “BreakPoint” and actually had time to talk with real people and hear their questions, and I began to learn why the concept of worldview is so difficult for contemporary evangelicals to grasp. So I used those questions as a guide in researching Total Truth: Why *don’t* evangelicals have a strong intellectual tradition? What is our own history and heritage? What are the inherited patterns of thought that still influence us today? I found that if you fly up for a birds-eye look at how evangelicalism developed over time, many people have an “aha” experience as they recognize where certain patterns came from–how we lost a Christian mind, so to speak. Which gives us clues to how to recover it.

Adrian: Some of my readers may not have even heard of the concept of a Christian mind or worldview. Can you explain to them briefly what the concept means?

Nancy: Talking about worldview means we want to overcome the sacred/secular divide that keeps Christian faith compartmentalized into a narrow part of life explicitly labeled “religion.” It means being convinced that Christianity gives a framework of truth for all of life–for science, economics, education, medicine, and so on.

The biblical basis for this is the opening chapters of Genesis; that’s where we go to find out why God created the human race in the first place, what His original purpose was. In Genesis, God gives what we might call the first job description: Be fruitful and multiply and subdue the earth. The first part–be fruitful–means to develop the social institutions, such as families, churches, schools, governments, laws. The second part–subdue the earth–means to harness natural resources, to plant crops, build bridges, design computers, compose music. This passage is sometimes called the Cultural Mandate because it says that our original purpose was to create cultures, build civilizations. That’s why it is just as much a matter of service to God when we do our professional work as when we pray and worship–because it is obedience to the Cultural Mandate.

Adrian: It may interest you to know that I work full-time for a commercial organization but am part of the regular preaching team of my local church. Does it surprise you at all that so many of my readers tend to initially assume that as I am a preacher I must be full time for the church? Do you feel that having preachers who also work out there in the real world will help the church interact with our culture?

Nancy: Absolutely. This was not such an issue in a pre-industrial society, where life was more holistic. But modern societies are split between public and private realms, with things like religion and church relegated to the private arena–demoted to something you do in your leisure hours, with no more status than a personal hobby. As a result, it has become remarkably difficult for Christians to know how to integrate their faith with their work and professional lives. Religion almost inevitably becomes therapeutic–focusing on the private realm of family, relationships, personal piety and moral behavior.

For pastors, this means it has grown increasingly difficult to maintain any realistic sense of ideas and trends in the secular world or to teach their congregations how to interpret those ideas within a biblical framework. Many pastors would benefit from spending at least some time on the other side of the public/private divide, in order to experience firsthand the incredible challenges to their faith that most ordinary Christians face every day.

Adrian: How can we counter this public/private split as individuals and churches?

Nancy: The first step is simply to learn how to recognize it. We have to realize that for most contemporary Westerners, the private realm of religion and morality is no longer where we talk about real truths but only personal “values.” This is sometimes called the fact/value split, and it divides human experience into two separate and incompatible domains. Reliable knowledge is assumed to a matter of scientific “facts,” which are objective, rational, and value-free. But what does that mean for “values”? They have been relegated to the realm of human subjectivity where they are, technically speaking, not a matter of true or false at all. Values may be personally meaningful, may be part of our cultural tradition, but ultimately they express something only about ourselves, not about objective reality.

Today most Westerners have absorbed this two-track view of truth. Alan Bloom, author of the well-known book The Closing of the American Mind, in another essay wrote: Every school child knows that values are relative. [They] are not based on facts but are mere individual subjective preferences.” In other words, this new definition of “values” is so deeply ingrained in the Western mind that it is something every school child knows.”

So why don’t most Christians know it? Why do we continue to talk about defending our “values”? We are not listening to the people we want to reach. We are using language that means one thing to us, and something quite different to the mainstream culture. This is a prime example of how evangelicals are so isolated in a subculture that we are not effective in engaging with people outside it.

Adrian: To accomplish all that, what kind of changes in our churches will we need?

Nancy: The most immediate place to begin is to teach apologetics from the pulpit. Whenever a pastor introduces a biblical teaching, he should also explain how to defend it against the most common objections. Teach Christians how to present biblical principles as genuine truths–how to break through the stereotype that religion is merely about subjective “values.”

Equally important, churches must lead the way in overcoming the sacred/secular dichotomy by recognizing how they themselves are often compromised by it. Christian churches and ministries borrow techniques of marketing, management, and fundraising from the secular world as though they were philosophically “neutral,” without subjecting them to a worldview critique. For example, books on church marketing uncritically adopt the assumption that the church’s goal is merely a mutual exchange of goods and services–a concept that arose out of social contract theory, which treats institutions as products of choice, created by self-interested individuals. How does that square with the idea that the church is not a product of choice but is ordained by God? That it has a normative structure and function beyond the individuals that comprise it? That it is the mystical Body of Christ headed by Christ Himself? Christian marketers do not seem to recognize the secular worldview roots of the techniques they are incorporating into many churches and ministries.

Adrian: A while back there was a rumour you were thinking of starting a blog. Will you ever do so, do you think?

Nancy: My husband, Rick, and I will soon launch a website of news, comment, and worldview called The Pearcey Report. Rick used to be managing editor of a Capitol Hill newspaper called Human Events and has significant background in writing and editing. He has edited several books, including David Limbaugh’s Persecution. So stay tuned.

Adrian: We certainly will, make sure you let us know when it is launched and I will link to it here.

July 21, 2005 Seeking the good in every Christian preacher
Browse Our Archives
Related posts from Adrian Warnock 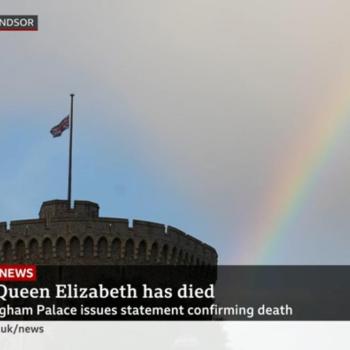 The Atonement Has a Few Main Ingredients
We tend to start with a limited set of atonement theories and...
view all Evangelical blogs